“My father was an electrician, and I followed him everywhere. I was wiring houses by the time I was 5 years old,” said Jackson, whose passion evolved to wiring computers.

The apple didn’t fall far from the tree.

Jamie Whitehead grew up intrigued with his mother’s ability to take a computer apart, re-wire the hard drive, its motherboard and graphics card and then put it back together. He carefully watched her repair clients’ devices in the family kitchen and absorbed what he saw.

“People needed replacement hard drives, and they’d bring them to me,” said Jackson, a 1990 computer engineering alumnus, who not only works as a PC technician, but also full-time as a software developer at Health Care Systems Inc. and as a computer class instructor at Auburn University at Montgomery. “Jamie followed me around like I followed my dad and asked question after question. When he built his first computer, we built it together.”

This weekend, Jackson and her son, both Alexander City, Alabama, natives, will graduate together.

Auburn University kicks off graduation weekend with commencement Friday at 5 p.m. inside Neville Arena. Conferral of engineering graduate and undergraduate degrees will be Saturday at 1 p.m., also at Neville Arena.

“It’s incredibly special for my mother and I to graduate together from Auburn University,” said Whitehead, who accepted a software developer position at Southeast Forest Products in Montgomery. “It’s so special because I’m receiving a degree in software engineering, but I got into computers because of my mother, helping her troubleshoot problems and learning from her in our home. She taught me by example.”

Hari Narayanan, chair of the Department of Computer Science and Software Engineering, is thrilled to see continued family success within the college’s largest department.

“It’s not often that a parent and child graduate at the same time from the same department,” he said. “We are so glad Mrs. Jackson chose to pursue her master’s degree in computer science and software engineering here at Auburn University. Her success is proof that working professionals can advance their education by earning graduate degrees online.

“We are also so very proud of Jamie, following in his mother’s footsteps through our program. We wish him incredible success as he ventures into his career and have full confidence that he will make Auburn University proud!”

Why computer science? For Whitehead, who has spent the past two years as a student worker in the Harbert College of Business’ IT department, the answer is simple. He followed in his mother’s footsteps since childhood. A passion for video games and how they are coded/programmed helped, too.

But Jackson’s journey to computers didn’t begin until her junior year of high school. Cruising through Benjamin Russell High School’s advanced diploma college preparatory program, she realized she needed another class credit. Then fate stepped in.

“Out of the blue, my counselor said, ‘We’re starting a computer class.’ We used those old Radio Shack TRS-80s to learn basic programming, and I’ve been fascinated ever since,” Jackson said. “Though I spent a lot of time working with my father, I knew I didn’t want to be an electrician. When I got into this computer class, it intrigued me.

“I’ve got to make a special shout-out to our high school chemistry teacher, A.J. Price, who not only agreed to teach that computer class, but also introduced students to potential careers. I began researching, and the more I researched, the more I was interested in a career in computers.”

‘You can do this’

Jackson said advancing her education through Auburn’s graduate programs not only met a long-term goal, but it was also beneficial for her career pursuits.

“It wasn’t easy,” she said. “Technology changes so fast. I was scared when I committed to return to school two years ago. I wondered, ‘Would I be able to keep up?’ because it was drastically different than when I was here the first time.”

“I think everybody hits a wall on occasion,” Jackson said. “I did it as an undergrad student and again this past spring. I was teaching at AUM and working full-time. The classes I took required a lot of work. When you’re a distance student, you don’t get the classroom time to be taught the concepts. You had to wait.

“At night, on-campus students are doing the homework while I’m watching lectures and then doing homework, working 40 hours per week and being on call 24/7. I was wondering if I could finish, but my mom, kids, husband—and the Lord above—said, ‘You can do this.’”

Whitehead—a champion wrestler in high school—endured similar struggles. After graduating from Benjamin Russell and earning an associates degree at Central Alabama Community College in Alexander City, he transferred to Auburn in 2019. Then COVID-19 changed the way we lived and learned.

“It was hard for me to get through classes because I was basically sitting around the house the whole time and everything was online,” he said. “I understand that it was rough for everybody. But when you’re sitting in a chair for 16 hours a day and can’t go out and do things or go to campus, it was very tough mentally. You’re seeing the same walls all the time.

“It got to a point about halfway into a semester where I was wondering if I was going to pass my classes. I spoke with my mom and stepdad, and they encouraged me to keep fighting through it. I thought I was going to fail. The classes required a ton of work to be done, and it seemed like I was doing about 10 assignments a week in each class, plus quizzes and exams.”

Whitehead needed an outlet. He found one in a 4-month-old Labrador-pit bull mix.

“His name is Buddy,” Whitehead said. “I saved him from the shelter. He brought joy into my life. I could take him outside for walks, which got me out of the house. This gave me a new sense of energy mentally to say, ‘I can do this.’”

Once on-campus classes resumed, Whitehead found himself with an unexpected game design and development classmate—his mother—who began graduate school in 2020. Both were enrolled in Cheryl Seals’ course, and both excelled.

College students sharing classes with their mothers might be weird to some, but not Whitehead.

“It was helpful because of her experience in the computer field,” he said. “If I was stuck with something, I could piggyback off her knowledge to better understand what I was doing wrong. She was there to answer anything and showed me ways to do things more efficiently. She said, ‘When you get in the real world, this is how they’re going to want you to do it.’

“We were also allowed to work together on group projects. With group projects, when you need to get in contact with someone else, you might not hear from them for days. But I know where my mom lives.”

Jackson said sharing a class in their Auburn journey was special, but also “normal.”

Jackson expects a special weekend on campus, but is even more excited about a post-graduation family trip to Pigeon Forge and Gatlinburg, Tennessee, where a private cabin and the Appalachian Mountains await. More than anything, this two-time Auburn graduate is filled with thanks and praise.

“It’s been tough as a mother of four, but with the help of the Lord and my family, the kids never wanted for things they needed,” she said. “I was able to give them the same opportunities that we planned before I went back to school. Auburn University gave me the skill set and the opportunity to better myself and change the trajectory of my family.”
Link to Image 1 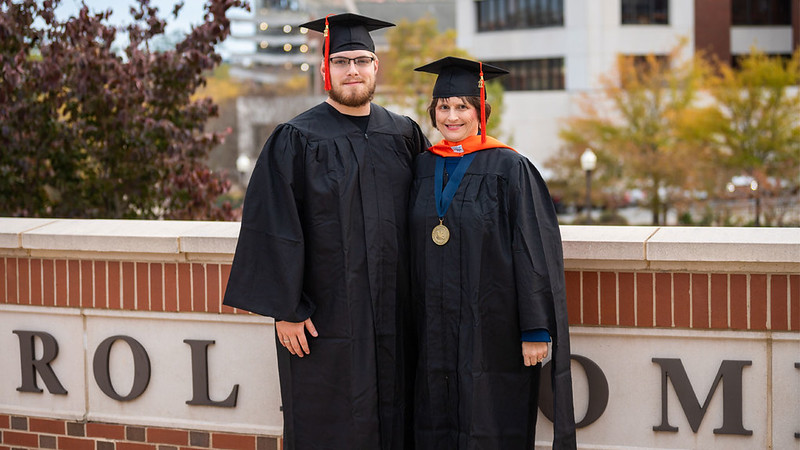 Jamie Whitehead and his mother, Donna Jackson, will be among the students graduating from Auburn University on Dec. 10. Mother and son will receive degrees from the Samuel Ginn College of Engineering’s Department of Computer Science and Software Engineering, although Jackson is receiving a master’s degree and Whitehead a bachelor's degree.