Bill Lister had not been inside the USS Drum in years.

The 97-year-old Edinburg, Indiana, resident is believed to be the last living crew member of the World War II submarine—on display at the USS Alabama Battleship Memorial Park in Mobile, Alabama—and it had been years since he was able to make the trip down to the bay and see the vessel he spent time aboard during World War II. Lister, a First Class radioman during the war, was part of eight missions on the Drum. He figures the last time he went to Mobile to see it as part of the annual reunions was around 2015.

But earlier this year through the wonders of technology, Lister was able to take a journey through the 311-foot, nine-inch submarine he occupied with dozens of others during one of the most transformational times in American history. Thanks to an inter-university project headed by Auburn University’s Junshan Liu from the College of Architecture, Design and Construction and Danielle Willkens of the Georgia Institute of Technology’s College of Design, Lister was able to use virtual-reality equipment to take a virtual tour of his former vessel.

Liu, Willkens and their team used 360-degree cameras and Lidar scanners to capture images of the interior of the eight-compartment submarine and put together a highly interactive virtual tour accessible to anyone and everyone through the USS Alabama Battleship Memorial Park’s website. The tour—which went live on Friday—Nov. 11, Veteran’s Day, is a one-of-a-kind way to view the Gato-class sub that includes commentary from Lister and video segments featuring Tom Bowser, a retired nuclear submariner who has written a book about the USS Drum.

Lister—who served in the U.S. Navy from 1942-45 and from 1949-66—was fascinated by the interactive tour after being presented a sneak peek of it during a nearly daylong visit with the research and restoration team earlier this year. Liu and USS Alabama Battleship Memorial Park Curator Shea McLean took a trip to Indiana to show Lister the technology and let him tour the boat.

“It was very interesting, and I think it’s a good deal,” said Lister, who also was part of the crew of the USS Nautilus during his service time. “I went through the boat, and you get a good idea of what’s going on. They said, ‘Point to a dot,’ and then zoom, I was in the conning tower. I hadn’t been in the conning tower since the war.”

Lister was able to spend a great deal of time touring the boat and also watching his great-granddaughter navigate the interactive expedition as well.

“I went completely through the boat,” said Lister, who told researchers he now tours the sub almost daily from Indiana. “They can take someone like me, or someone who’s claustrophobic who would rather do it [virtually]. You get the idea when you’re doing this that you’re actually on there pointing this [pointer] at something. It’s very realistic, really.

“You work your way through with these little dots, and you push the button and bing, you’re in the forward battery. You point it at a dot forward on deck, push a button and zip, you’re there.”

Lister said touring the Drum—which was in service from 1941-46—in such detail brought back memories from his days aboard the sub from 1943-October 1945.

“The submarine force never got much publicity,” said Lister, who enlisted at the age of 17. “We had 80 men on a 311-foot-long mechanized sewer pipe. I fought a different war than my brother did in the Marine Corps. Only 15,200 men actually made patrols and rode the boats during the war, and they killed 28 percent of us.

“We were just not around anybody [out at sea], and there were times when you were scared. I knew the war was going on and what we were doing. Each submarine had its area, and you stayed in your area.”

The USS Drum project gave researchers a chance to provide accessibility to a prized World War II relic to those who previously were unable to experience it, either in person or by descending inside its tight layout.

“The main purpose of this project is to allow aging veterans and people with reduced mobility to visit the USS Drum virtually,” said Liu, who has been working on the project since June 2021. “Danielle and I have been using the same technology in documenting construction project sites and historic buildings for years, but it was the first time we tested it out on a naval ship. The whole experience was challenging, but also very rewarding.

“One thing we found most exciting about this project was that the virtual tour can serve as a repository to archive and share Bill’s incredible wartime stories onboard the Drum and Tom’s amazing work to restore the submarine, which is only accessible by stairs for in-person visits to the boat.

The USS Drum project was a unique endeavor for Liu and his team.

“As a researcher, you don’t get to participate in this type of project every day,” Liu said. “I feel so fortunate to be involved in this very meaningful work, with the support from my school, the CADC and a colleague from RBD’s Innovation & Research Commons. We have started the discussion with USS Alabama [Battleship Park] about our next projects, including bringing the battleship online and presenting their warplanes virtually, et cetera.”

For Willkens, the project was about both providing accessibility and preserving history.

“The virtual tour provides visitors with a unique experience to interact with the submarine and its history at their own pace,” said Willkens, an assistant professor in Georgia Tech’s School of Architecture. “They can take a deep dive into technical aspects or explore stories of those who worked onboard. I hope this is the first of many projects for us there at Battleship Park.”

Next step in restoration, preservation

This USS Drum research project was the latest in a series of commitments by the park’s administration to restore and preserve historic vessels like the submarine. It reflects a concerted effort by the park’s team of restoration experts dating back to 2007 to continue to build a living history in Mobile Bay.

“The video collaboration between USS Alabama Battleship Memorial Park and Auburn University’s McWhorter School of Building Science is all about access to history,” said Maj. Gen. (Ret.) Janet Cobb, the park’s executive director. “It was created for those physically unable to access submarine USS Drum (SS-228), or for a curious school child on the other side of the world. When you’re greeted by the last living member of USS Drum’s World War II crew? A phenomenal experience.”

McLean said the virtual tour provides a fun and interactive way to explore the USS Drum—the world’s oldest American submarine on display—without having to physically navigate the tight quarters inside the vessel.

“Firstly, the USS Drum was never designed to be a vessel with abundant room inside, and the spaces within are cramped and often difficult to navigate,” McLean said. “It is filled with small compartments and narrow passageways, and each compartment is separated by a small oval water-tight door that are somewhat difficult to pass through as well. So, that being said, it can sometimes be quite challenging for anyone to tour the sub and can be particularly challenging for anyone with any type of physical impairment.

“These virtual tours, for the first time, will make the Drum accessible to all who wish to tour the vessel from stem to stern. Moreover, these tours will make the vessel available to people worldwide who might not otherwise be able to make the trip to Mobile to see her in person. The addition of interactive personal interviews, combined with archival footage, provides the visitor with a better sense of the boat’s history as well as what it was like to crew the warship during the world’s greatest historical conflict, World War II.”

Lister was highly complimentary regarding the park’s restoration and preservation efforts.

“It’s probably one of the better military parks in the country, because they’ve got so much there,” said Lister, who made runs aboard O-boats, R-boats and S-boats during his time in the Navy. “It was necessary that they got the Drum out of the water. It got so beat up on the eighth run that they had to replace the conning tower, and when they pulled it out of the water, it was in pretty bad shape.

“That thing’s in better shape right now than it was when I got off it. They’ve done a great job there in Alabama at the military park.”

Lister is pleased the Auburn-led research team has partnered with the Mobile park to ensure that future generations of visitors and history enthusiasts have the chance to see the USS Drum in such a fun and interactive way.

“I have high hopes of going down to see the Drum again [at a reunion], but I don’t have high hopes of getting on it,” said Lister, who has attended 30-40 USS Drum reunions at the park. “Going through the boat, they’ve done a good job of stopping at the right places and pointing out this and that. I think what they’re doing down there is good and is going to preserve a lot of history.

“It’s good that there are people like that who are interested in preserving the history. It amazes me what they’re doing with history now. I’m really glad they are doing this.”

The USS Alabama Battleship Memorial Park in Mobile, Alabama, has added a virtual tour to its website thanks to a project co-led by Auburn Associate Professor Junshan Liu.

The USS Drum virtual tour was a collaborative project among researchers from Auburn University and the Georgia Institute of Technology, as well as staff and administration from the USS Alabama Battleship Memorial Park. 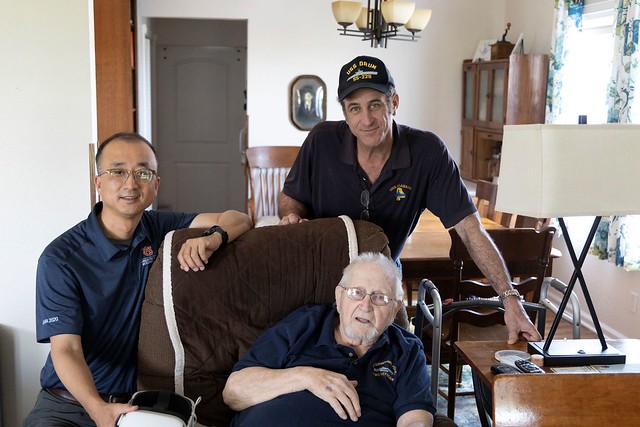 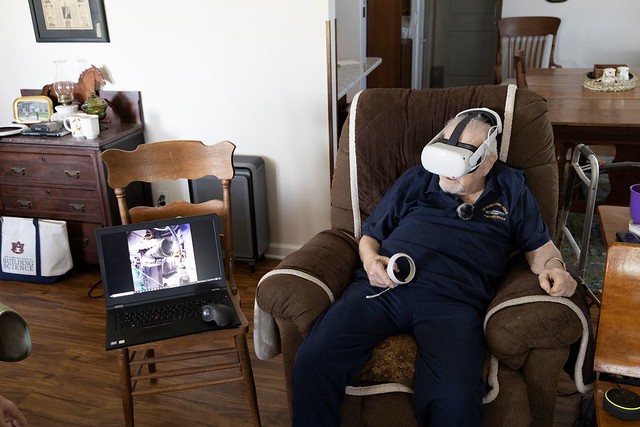 Bill Lister was able to use virtual reality technology in his home in Indiana to go inside the USS Drum—a submarine he helped crew for eight missions during World War II while a member of the U.S. Navy.

The new USS Drum virtual tour allows visitors to get a look at the entire eight-compartment submarine, including the aft torpedo room.

More than 70 crew members slept in tight quarters on the USS Drum, a Gato-class submarine that sunk 15 ships during World War II.

Narrow passageways were the norm on the 311-foot, 9-inch USS Drum. 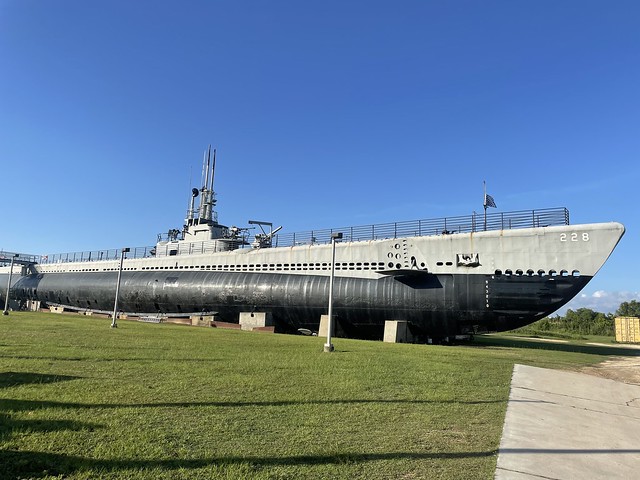 The USS Drum is a major attraction at the USS Alabama Battleship Memorial Park in Mobile, Alabama.