Kristine Griffett has your headache on her mind. And those painful joints. Even your high cholesterol.

That’s because Griffett, an assistant professor of pharmacology in the Auburn University College of Veterinary Medicine’s Department of Anatomy, Physiology and Pharmacology, is hard at work on the development of new compounds that will target receptors in the body and might one day result in new, less addictive drug therapies for inflammation, pain, chronic high cholesterol and cardio-metabolic problems like obesity, diabetes and atherosclerosis.

To achieve this goal, Griffett is studying compounds that target nuclear receptors, proteins that occur naturally in the body, bind to DNA and control the activities of genes involved in metabolism, inflammation, pain, cancer and many other aspects of physiology. Humans have 48 of these receptors, each with a distinct role in physiology and disease.

“Most people do not realize the therapeutic relevance of these receptors,” Griffett explained. “But approximately 30 percent of prescription drugs currently on the market target them. For example, corticosteroids target the glucocorticoid receptor, and birth control drugs target the estrogen or progesterone receptors.”

For Griffett, however, the focus is on those receptors that have been less commonly studied. She tests new compounds designed and synthesized by her collaborators to activate these receptors, first at the cellular level, then, if the compound seems promising, in mice. At this stage, the effectiveness of the compounds also is tested against current therapeutics already on the market. “Typically,” Griffett noted, “about one in three of the promising compounds identified in this early testing will eventually become ‘lead’ compounds that may ultimately become patented, licensed and further evaluated in clinical trials.

“My research is mostly on receptors that are less characterized as therapeutic targets,” she added. “This allows me to study how the receptors function under normal physiological conditions, as well as to work with medicinal chemists to design synthetic compounds to determine their efficacy in activating these receptors for the treatment of various diseases.”

One of her receptor targets is designated REV-ERB. It is involved in processes as diverse as maintaining circadian rhythms, reducing inflammation and regulating lipids and glucose in the body, but Griffett is primarily interested in REV-ERB’s analgesic role. “In both humans and animals,” she said, “chronic low-grade inflammation is a key factor in the development of chronic pain. When we activate this receptor, we see a significant reduction of inflammation and a ‘normal’ sensitivity to outside stimuli.

“This suggests that activating REV-ERB can reduce inflammation and have an analgesic effect,” she continued. “This is particularly exciting because it provides a non-opioid pathway for the treatment of pain, hopefully with low or even no addiction danger. The REV-ERB project just received funding notice from the National Institutes of Neurological Disorders and Stroke and is in the early stages at present.”

In addition to REV-ERB, Griffett also is evaluating compounds that target liver receptors, or LXRs, that may be a key to the treatment of familial hypercholesterolemia, or FH, an inherited genetic disease that increases LDL cholesterol levels, cardiovascular issues and premature deaths. In the United States, FH is estimated to affect approximately one in 200 people, but many cases go undiagnosed and untreated. Other related diseases, such as dyslipidemia, which causes an imbalance of lipids, and atherosclerosis, a condition that develops due to plaque buildup in arteries, may also be treated with some of these compounds.

“I am currently working with Pelagos Pharma on the international patents and rights to several compounds that target the Liver X Receptors (LXRs) for the treatment of familial hypercholesterolemia, dyslipidemia and atherosclerosis,” Griffett said. “I recently identified a target gene of LXR in the intestine called steryl-o-acyltransferase 2 (Soat2), that is an identified clinical target for atherosclerosis. When Soat2 expression is high, a person is at greater risk for developing atherosclerosis.

“I worked to make an LXR compound that can be delivered orally that only is active in the gut,” she continued. “It actually causes mice to excrete cholesterol in their feces rather than reabsorb it, and it has no effects on other tissues. This work not only identified Soat2 as a target of LXR, but also identified tissue selective drugs that have potential in the treatment of atherosclerosis. We are planning to complete the preclinical phase within the next year or so, and then we will attempt to get funding for clinical trials for treating FH.”

In addition to the ongoing work with REV-ERB and LXR, targeting other nuclear receptors is a field that holds much more promise, not only for better treatments to help control maladies such as pain and high cholesterol, but also for improving therapies for a variety of other diseases and conditions.

“My work is very dynamic,” Griffett concluded, “as these receptors are involved in many different physiological processes. That is what makes it fun and sometimes frustrating! The goal is to develop new compounds and therapeutics, but we will also learn so much about how these receptors function along the way.” 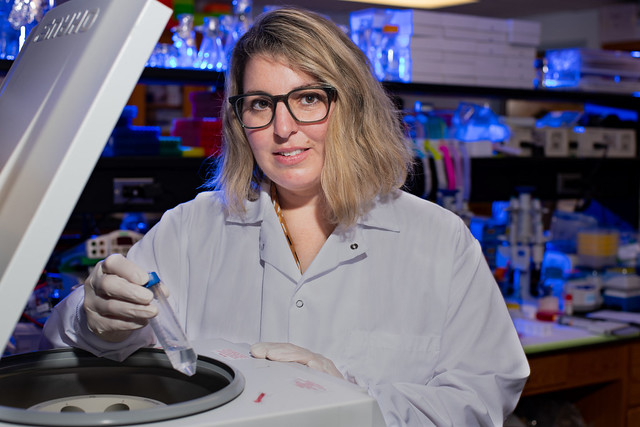 Kristine Griffett, an assistant professor of pharmacology in the Auburn University College of Veterinary Medicine’s Department of Anatomy, Physiology and Pharmacology, is hard at work on the development of new compounds that will target receptors in the body for new therapies.