An Auburn University research team in the College of Forestry, Wildlife and Environment, or CFWE, has been awarded a $459,482 grant from the U.S. Department of the Treasury in cooperation with the State of Alabama Department of Conservation and Natural Resources and the Alabama Center of Excellence at the MESC/Dauphin Island Sea Lab.

Led by Christopher Anderson, lead principal investigator, the grant will fund a study to assess the function and vulnerability of forested wetlands in the Mobile-Tensaw-Apalachee River Delta, or “MTA River Delta.”

Anderson, a professor of coastal wetland ecology, will lead the study with a team of researchers that includes Auburn Professor Latif Kalin of the CFWE and the University of South Alabama Professor Ruth Carmichael from the Dauphin Island Sea Lab.

“The delta is a tremendous wetland complex of international significance; however, it remains greatly understudied,” said Anderson. “The MTA has significant river flows that are highly connected to tidal forested floodplain wetlands before draining to Mobile Bay. These wetlands likely provide important contributions to the bay and its productivity.”

The objective of the team’s research is to examine tidal forested wetlands of the MTA River Delta and predict changes to the delta due to sea level rise and future river flows. Using a combination of field data and environmental modeling, the team will examine how proximity to Mobile Bay influences wetland hydrology, salinity and forest communities.

“A total of nine salinity gaging stations and over 40 forest survey plots will be established across the lower MTA delta to determine forested wetland types and their susceptibility to sea level rise and change in salinity,” said Anderson.

“ANN modeling is a data-driven approach that can help learn and map complex relationships between inputs and outputs,” said Anderson. “These models will be used to forecast MTA River Delta salinity and tidal connectivity based on expected shifts in important input variables such as tide levels and river flow.”

The team also plans to characterize the relationship between river flows from the MTA and the extent of delta derived organic matter to Mobile Bay.

There is uncertainty about the role that the MTA delta plays in terms of export of organic matter and nutrients to the greater estuary, says Anderson. These materials may be very important for the aquatic productivity of Mobile Bay.

The collaboration with Carmichael and others at Dauphin Island Sea Lab, or DISL, will bring technical expertise to the project that will enable the team to evaluate the Delta’s influence for the first time.

“Working with the DISL, we will trace organic matter from the delta by measuring carbon and nitrogen stable isotope ratios that can help us distinguish sources,” Anderson said.

“This approach will help us determine the role of the MTA River Delta in exporting organic matter of different sources due to tidal connectivity and river flow.”

“There is tremendous urgency to better understand the expected fate of the MTA River Delta because there are important questions about its functional role in the larger Mobile Bay estuary,” said Janaki Alavalapati, dean of CFWE. “Anderson’s research will help to identify potential risks to this important coastal resource.”

An Auburn University research team in the College of Forestry, Wildlife and Environment, or CFWE, has been awarded a grant of $459,482 to assess the function and vulnerability of forested wetlands in the Mobile-Tensaw-Apalachee River Delta, or “MTA River Delta.” Some of the team members on the MTA Delta project include from left to right: Sam Bickley of the Auburn University CFWE; Ruth Carmichael of the Dauphin Island Sea Lab, or DISL; Akela Yuhl also of the DISL; and Chris Anderson, lead principal investigator in Auburn University’s CFWE. 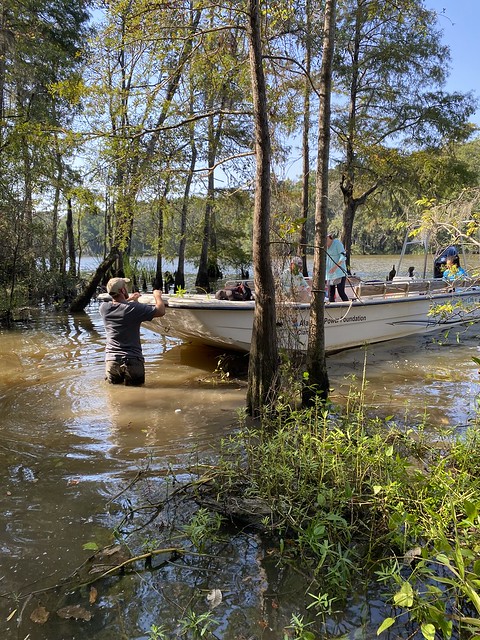 An Auburn University research team in the College of Forestry, Wildlife and Environment, or CFWE, has been awarded a grant of $459,482 to assess the function and vulnerability of forested wetlands in the Mobile-Tensaw-Apalachee River Delta, or “MTA River Delta.” In this photo, researchers arrive at a wetland salinity gaging station along a tributary of the Mobile River in the MTA Delta. 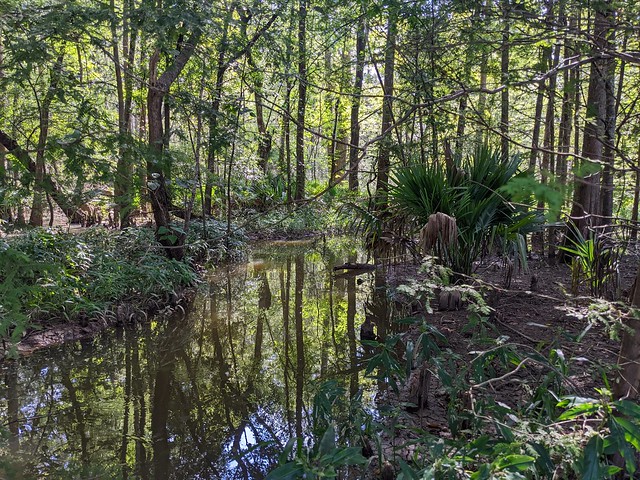 An Auburn University research team in the College of Forestry, Wildlife and Environment, or CFWE, has been awarded a grant of $459,482 to assess the function and vulnerability of forested wetlands in the Mobile-Tensaw-Apalachee River Delta, or “MTA River Delta.” In this photo, the tidal inlet of a tidal freshwater forested wetland in the MTA Delta is shown.