Dignitaries and university officials gathered in the green space of the new center to formally commemorate the first-of-its-kind campus building and academic resource unlike any other in the world.

“This is a moment born out of what first seemed like a dream,” said Susan Hubbard, dean of the College of Human Sciences. “An academic center unlike any in the world, one offering an elevated hospitality management education to students and elevated hospitality experiences to the visitor—giving the world an opportunity to see Auburn like never before.”

“The Tony and Libba Rane Culinary Science Center will shine a light on Auburn and Alabama as an incubator of world-class hospitality talent,” proclaimed Hans van der Reijden, founder and CEO of Ithaka Hospitality Partners.

Both Auburn University President Christopher B. Roberts and Bob Dumas, president pro tem of the Auburn Board of Trustees, commended everyone involved in the project for exemplifying the university’s mission.

“As a land-grant institution, our mission is to put practical knowledge into the hands of those who can use it, create economic opportunities and improve the quality of our lives,” said Roberts. “I believe the Rane Culinary Science Center will do just that.”

Dumas called it a historic day for Auburn as it “recognizes Auburn’s mission as a land-grant institution in improving its community, state, nation and world with exceptional facilities and experiences for our students, the Auburn Family as a whole and so many others.”

On a personal note, Dumas said he was also pleased for his friend and fellow board member, Jimmy Rane. The 1968 Auburn alumnus and the Rane family made the lead gift in 2017 to create a culinary science center at Auburn. The Board of Trustees would later honor the family’s dedication to the project by naming the facility after Jimmy’s parents.

“I know this must be a dream come true for you, Jimmy, to witness this impressive structure and all it represents and to know it honors so well the name and memory of your father and mother, Tony and Libba Rane,” said Dumas. “This truly has been a project of love and it will forever remind those who grace this building’s halls of the great devotion that Tony and Libba had for traveling, cooking and hospitality—passions they generously shared with others.”

The building may bear his family name, but Jimmy Rane opted to focus on his beloved university.

“This is a day for Auburn,” he said. “I owe so much to this institution, to my teachers, to the administrators who helped me. I try to remember them and honor them for what a difference they made in my life.”

Rane doesn’t shy away from the fact that he was the first person in his family to earn a college degree or that his time at Auburn wasn’t easy for him. And yet, his love for Auburn has never wavered.

“Auburn is a wonderful place, and I will never be able to repay this university for the many great things that it has done for me,” he said.

If creating a unique culinary science center at Auburn wasn’t a dream, it was certainly a vision hatched nearly 20 years ago from the work of several College of Human Sciences leaders, including Hubbard and then-Dean June Henton. Horst Schulze, Ritz-Carlton founder and former CEO, even recommended Auburn create an elevated educational experience in hospitality management.

The team conducted research for years and eventually visited globally recognized programs and facilities around the world, including Singapore, Australia, South Africa and all of Europe and the United States.

Rane said the team found that certain centers were the best at one area of hospitality management, such as culinary or distilling, but none were the best at all, and none offered all under one roof.

Martin O’Neill, now head of the college’s School of Hospitality Management who made a lot of those trips with Van der Reijden and others, said Auburn’s program has long been known for producing superior service.

Now, with a superior educational facility, Auburn will be known for much more.

With the added vision and support of the Auburn University Board of Trustees, in particular Jimmy Rane and Raymond Harbert, the Tony and Libba Rane Culinary Science Center came to fruition in August, solidifying Auburn as the home of an education facility unlike any other in the world.

“The Tony and Libba Rane Culinary Science Center has already changed the landscape of Auburn and has the hospitality industry as a whole, taking notice,” said Hubbard.

Students will experience first-hand what it takes to learn, practice and master culinary skills and techniques from credentialed faculty, to work in and operate an elegant restaurant with world-renowned chefs and staff and operate a luxury hotel from top hoteliers.

They will learn about brewing, wine making and distilling. They will learn from a master sommelier and additional beverage experts from around the country. Students will also assist in the planning and execution of events on the center’s rooftop garden and street-level green spaces.

The massive building—enveloping 142,000 square feet and six stories at the corner of East Thach Avenue and South College Street—exemplifies experiential learning by providing students with traditional lectures and real-world experiences under one roof.

Roberts, who has “long touted that the education of our students occurs both inside and outside the classroom,” added that visitors will see this “in real time every time they dine, stay or attend an event in the center.”

By experiencing the Tony and Libba Rane Culinary Science Center, guests and visitors will contribute to the training of future hospitality experts.

Besides the world, the Rane Culinary Science Center is unlike any other building at Auburn because it is the first campus building to blend a major academic component with revenue generating elements. Revenue generated from The Laurel Hotel & Spa, a teaching hotel and spa, and 1856, a teaching restaurant, as well as other features of the center will help pay for additional expert staff such as a master sommelier and a chef-in-residence, among other aspects.

Fittingly, the center will also house the School of Hospitality Management, which offers Alabama’s only professionally accredited hospitality management program. The center is expected to be a draw for students currently in top culinary programs in high schools in Alabama and across the nation. It will also become a destination for alumni and new guests alike who enjoy food and beverage tourism.

“This state-of-the-art facility, in which not a single detail has been overlooked, will be an asset not just to students, staff and our community, but will also attract visitors from all corners of the world,” said Van der Reijden. “We envision the Tony and Libba Culinary Science Center as a travel destination for lovers of great food, drink, hospitality and educational opportunities.”

Rane’s interest in supporting the college’s plan for a culinary science center grew when he learned of the passion Van der Reijden had for seeing the dream become a reality. Van der Reijden’s enthusiasm reminded Rane of his own father.

Tony Rane was the son of Italian immigrants and became a successful entrepreneur with several restaurants, retail stores and hotel franchises. He was known for his love of travel, cooking and the hospitality that he and his wife, Libba Mills Rane, generously shared with others.

Jimmy Rane followed in his father’s entrepreneurial footsteps, founding Great Southern Wood Preserving Inc. in 1970 in Abbeville, Alabama. He is presently the chairman, president and chief executive officer of the lumber products manufacturer.

Five years ago, the Board of Trustees approved naming the future culinary science center in honor of Jimmy Rane and the Rane family, proclaiming it as the Tony and Libba Rane Culinary Science Center.

“I had the pleasure of knowing Tony and Libba Rane, and I know their love for gathering around good food and spreading the joy of friendship and family will live on here in the center named in their honor,” said Hubbard. “Thank you, Jimmy and the entire Rane family, for sharing your love and passion for family and Auburn University in a way that will shape future leaders and give all of us exceptional experiences today.”

Knowing the center is the only one of its kind in the world is the proverbial icing on the cake for Jimmy Rane, who celebrated his birthday on Sept. 15.

“You know at Auburn we do like to be number one. And this is yet another big example of how we lead the way,” he said. 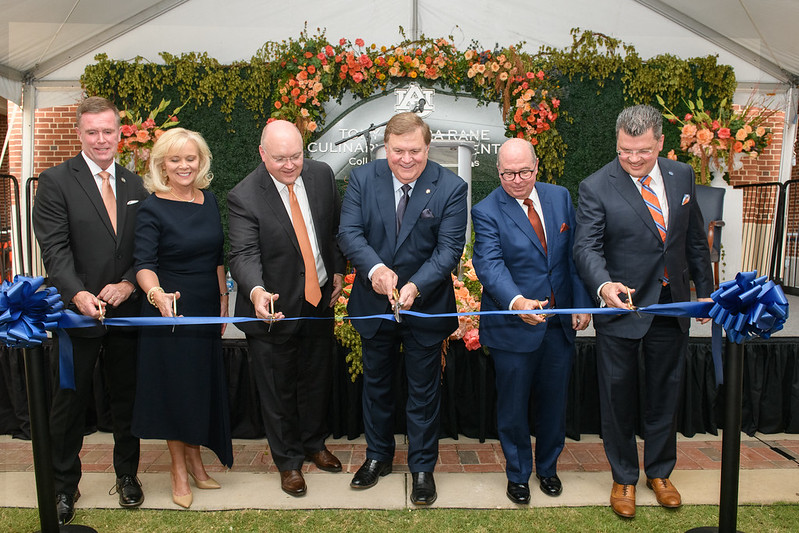 Participating in the ceremonial ribbon cutting of the Tony and Libba Rane Culinary Science Center at Auburn University on Sept. 15 were, from left, Martin O’Neill, head of the School of Hospitality Management; Susan Hubbard, dean of the College of Human Sciences; Auburn President Christopher B. Roberts; Bob Dumas, president pro tem of Auburn Board of Trustees; and Hans van der Reijden, founder and CEO of Ithaka Hospitality Partners. 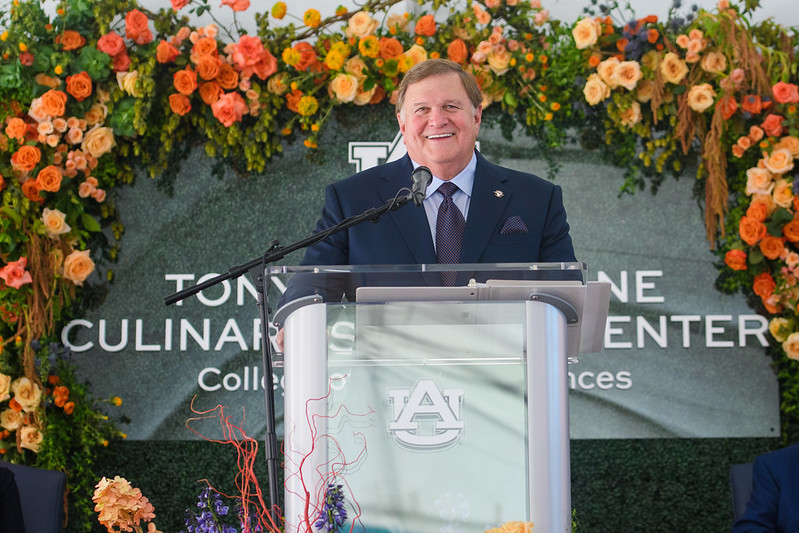 Jimmy Rane, a longtime member of the Auburn University Board of Trustees, was happy to take part in the Tony and Libba Rane Culinary Science Center on Sept. 15, his birthday. 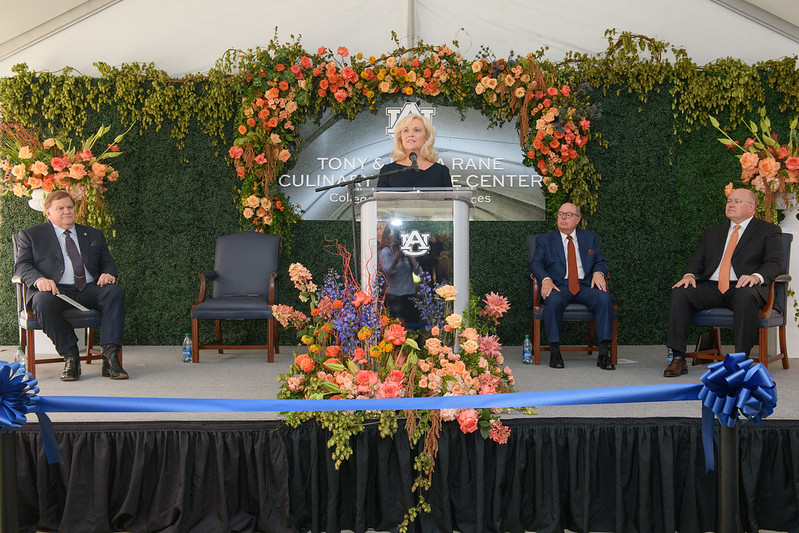 Susan Hubbard, dean of the College of Human Sciences at Auburn University, addresses the crowd gathered for the official dedication of the Tony and Libba Rane Culinary Science Center on Sept. 15. 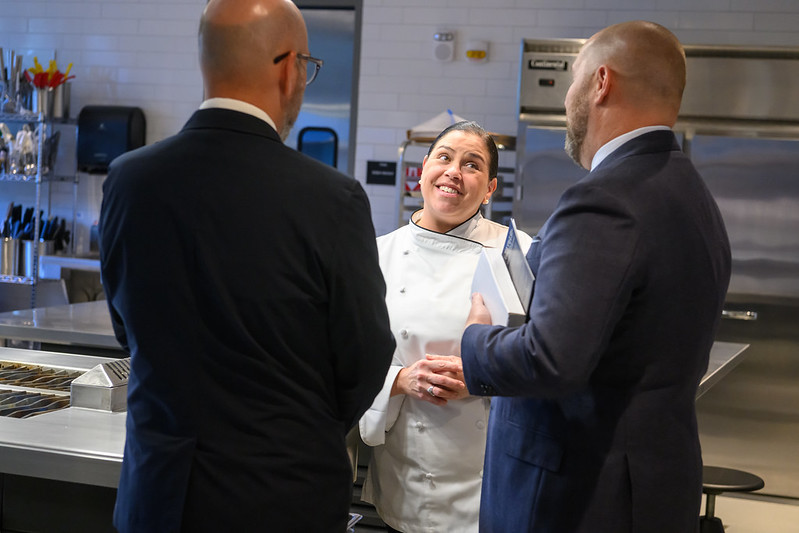 Ana Plana, lecturer in the School of Hospitality Management in Auburn University’s College of Human Sciences, talks with guests visiting the Tony and Libba Rane Culinary Science Center at a dedication ceremony on Sept. 15. 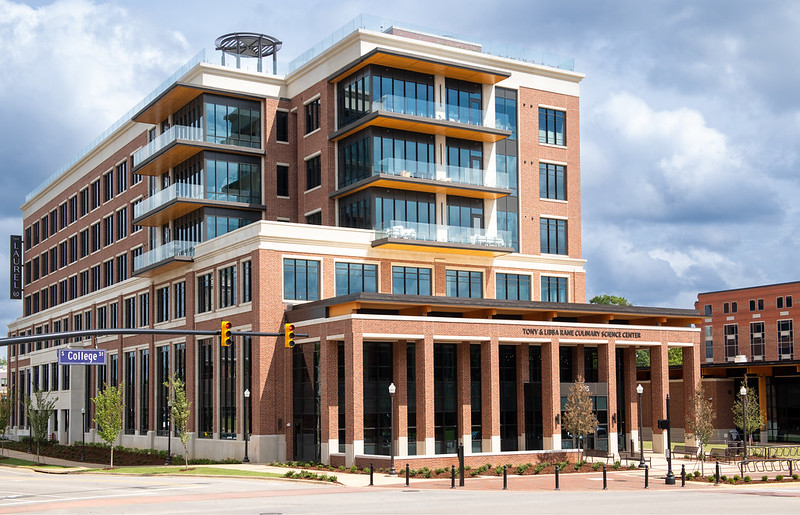