K-Rob Thomas knows exactly what the Academic Excellence Program, or AEP, did for him as a student in Auburn University’s Samuel Ginn College of Engineering.

“I wouldn’t be an engineer without it,” he said. “Despite being a strong performer in high school, particularly in math and science, I was not adequately prepared for the rigor of college.

“AEP gave me a welcoming, family-oriented environment at Auburn, a structured learning environment, guidance from mentors who had demonstrated success in engineering at Auburn and the feeling of a place where I could unapologetically be myself.”

AEP was founded in 1996 as the Minority Engineering Program, dedicated to promoting diversity within engineering. The program continues to recruit and retain underrepresented students within all engineering majors.

Thomas earned a civil engineering degree in 2001 and is currently vice president of origination and acquisitions at Southern Power Company. When he realized AEP would mark its 25th year in the 2021-22 academic year, he approached the Auburn Advancement office in the college about commemorating the occasion.

“This program has positively influenced the academic success of many Auburn students, both minority and majority students,” he said. “AEP is a model that should be replicated across the colleges at Auburn because it works.

“AEP is more than a program. It is an experience that shapes endeavoring engineers to pursue excellence in their academics, succeed professionally in their career of choice and create a platform for future engineers to develop their philanthropic sensitivities.”

Thomas became chair of a committee made up of Advancement staff and engineering alumni who would plan a celebration event and set a most ambitious $2.5 million fundraising goal. The effort specifically included creating endowed scholarships within the program and adding more corporate sponsors.

Lindsey Vicente, a development officer in Auburn Advancement, said she realized that the anniversary provided AEP alumni the perfect opportunity to endow a scholarship, especially from those who knew AEP’s first director, Dennis Weatherby.

“Some alumni didn’t even know Dr. Weatherby, but they still made a gift,” she said. “AEP was so important to them.”

Weatherby made a name for himself with Procter & Gamble, where he created a lemon-scented dishwashing detergent. When he came to Auburn in 1996, he started the Minority Engineering Program. Weatherby died in 2007 at the age of 47.

Thomas and his wife, Marcia Leatha Thomas, also a 2001 Auburn graduate, were among those who endowed scholarships. Their gift also earned them admission to the newly formed Weatherby Society.

“I am an engineer because of Dr. Weatherby,” said Thomas. “My wife and I are simply paying forward the scholarships we received while at Auburn. Dr. Weatherby gave me a scholarship to ease the financial obligations of an Auburn education, and that scholarship was less about GPA and academic performance and more about commitment, perseverance, leadership, relationship and ambassadorship.

“There are few times in life where people or experiences transform the trajectory of your life. Dr. Weatherby changed the trajectory of my life. His fingerprint has influenced everything I have achieved in life. From my family to my professional achievements to my philanthropy, Dr. Weatherby is and will forever remain my inspiration.”

“We’ve seen firsthand how AEP equips students with the needed expertise and skills to thrive in engineering,” said Zeke Smith, a 1982 industrial engineering alumnus, member of the Auburn Board of Trustees and Alabama Power’s executive vice president of external affairs. “We’ve had leaders at Alabama Power say they wouldn’t be in the position they are in today, or had the opportunities they’ve experienced, without this program.”

“We regard Auburn engineering as one of the premier engineering institutions in the south, and the AEP program is the ‘go-to’ source for developing diverse engineering talent at Auburn,” he said. “We know that if we can get these students to Auburn, they will be successful within the AEP program and they will likely stay in our geographic region upon graduation and add to our workforce.”

Smith concurred, noting “the partnership with AEP provides a formal pathway for us to engage and recruit prospective employees, providing the best opportunity to keep our brightest students in Alabama and advance our next generation of leaders.”

The gift from Alabama Power renamed AEP as the Center for Inclusive Engineering Excellence.

Vicente and her Advancement colleagues were pleased to see many companies realize the benefit of supporting the center. It was not only a way to show their commitment to diversity, but it also ensured they had access to a diverse workforce.

When the office surpassed its $2.5 million goal months before the April 30 celebration event, it didn’t stop seeking donations. The effort ultimately resulted in $3.4 million for the program, with $1.2 million for student scholarships alone.

Cordelia Brown, the center's current director, said more scholarships will help recruit students who could do well in engineering, but need financial assistance, and help retain students as an incentive to those who perform well semester after semester. The additional funding will also ensure the center continues to promote career fairs and other professional development opportunities for students.

One of the most anticipated developments, according to Brown, is the return this summer of the Minority Introduction to Engineering, or MITE. The pre-college program aims to expose rising eighth through 12th grade students to Auburn engineering, as well as life at Auburn.

“In order to secure future growth, you have to build a pipeline,” said Vicente. “MITE is the beginning of that pipeline.”

AEP’s recruiting and retention efforts have been successful for years. When Brown became director in 2015, it served 100 students. The center currently works with more than 400. Brown said reaching students before they may even consider Auburn just made sense.

“We want students to know Auburn—from the academic rigor to life on campus,” said Brown. “We want them to know we are here to help them be successful from the moment they come to campus through graduation and beyond.

“I wasn’t here 25 years ago when it all started, but [previous directors] Dr. Weatherby, Shirley Scott-Harris and Cheryl Seals created a solid foundation for us. It’s our job to build upon that and increase our potential.”

Promoting AEP to a center means Brown and center staff will operate with a much wider perspective.

“Historically, we were focused on recruiting and retention of undergraduate students,” she said. “Now we have the capabilities of recruiting much earlier, encouraging and exposing middle school students to engineering and to Auburn.”

The center will also leverage more from alumni and corporations by utilizing their expertise to support what students need, such as mentorships, internships, co-op experiences and employment.

“Relying on [alumni and corporate] engagement will be integral to the success of the center,” Brown said.

The center's summer enrichment program, which is currently underway, is a piece of the pipeline that will benefit from additional resources.

“This effort is critical to our mission, to assisting incoming freshmen in making that transition from high school,” explained Brown. “By exposing these students to campus, the academic rigor at Auburn, career exploration and engagement opportunities with corporation and alumni, we are setting them up to be ready for the fall semester.

“By starting with students early on, they envision themselves being here at Auburn, and they stay engaged with us through graduation and beyond.”

To read about the 25th anniversary, go here.

To read about the Weatherby Society, go here.

To read about the new Center for Inclusive Engineering Excellence, go here.

To read about the Minority Introduction to Engineering program, go here. 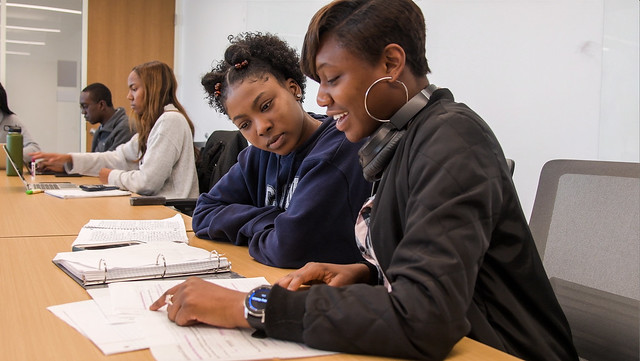 Auburn Engineering had much to celebrate when its Academic Excellence Program turned 25. Alumni and corporations donated more than $3 million, creating more scholarships, expanding programming and establishing a new giving society.

More Information Donate to the Samuel Ginn College of Engineering