Roberts, the former dean of the Samuel Ginn College of Engineering, was unanimously approved as Auburn’s next president by the Auburn University Board of Trustees in February, with his tenure starting today, May 16, replacing Jay Gogue, who recently retired from the role after serving two terms as president.

“In my 28 years on the Plains, I’ve come to value and cherish everything that makes the Auburn experience truly remarkable and distinctive,” Roberts said. “I've developed a deep appreciation for our unique culture and how to achieve ambitious goals here at Auburn. Through our successes, we’ve earned the right to dream the biggest dreams, and we will strive to be nothing short of excellent in all areas of our land-grant mission.”

Roberts is spending much of his first week as president meeting with students, faculty, staff, administrators, community leaders and others to hear from the Auburn Family and express his great excitement and vision for furthering Auburn as a preeminent university on the national and global stage.

“We are and will continue to be an outstanding land-grant institution that exemplifies excellence and innovation,” he said, adding that Auburn is on the cusp of even greater prominence.

Roberts earned a bachelor’s degree in chemical engineering from the University of Missouri in 1990 and master’s and doctoral degrees in chemical engineering from the University of Notre Dame in 1992 and 1994, respectively. He began his career at Auburn in 1994 as an assistant professor in the Department of Chemical Engineering and became department chair in 2003. He was named dean of engineering in July 2012. Roberts and his wife, Tracy, have two children, both having graduated from Auburn High School and attended Auburn University.

Roberts said that as president he is committed to instilling a campus climate in which all are welcomed, valued, respected and engaged.

“If our students, faculty, staff and alumni feel that way, great things will happen at Auburn,” he said.

First and foremost, Roberts said he seeks to advance a transformative student-centered experience that is the best in the nation.

“It is critical that we continue to attract high-achieving students while enhancing access and affordability,” he said. “This is particularly important given our land-grant mission and our commitment to the citizens we serve.”

He also will be devoted to supporting a highly talented, innovative and motivated faculty and staff, adding that “through our pioneering research, we will make advancements and discoveries at Auburn that will improve people’s lives and make our world a better place.”

Roberts said he’s excited for the future, knowing all that Auburn has done and will continue to do in the way of leading economic and social impact.

“I’ve seen what our university can do, so I know how much more we can accomplish,” he said.

To learn more about Roberts and to connect with him, visit Auburn’s Office of the President website. 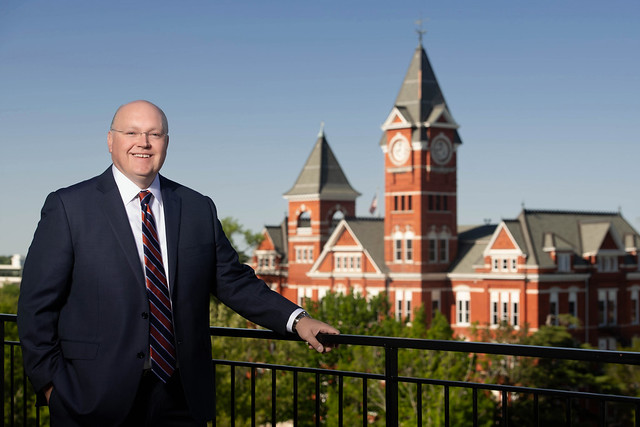 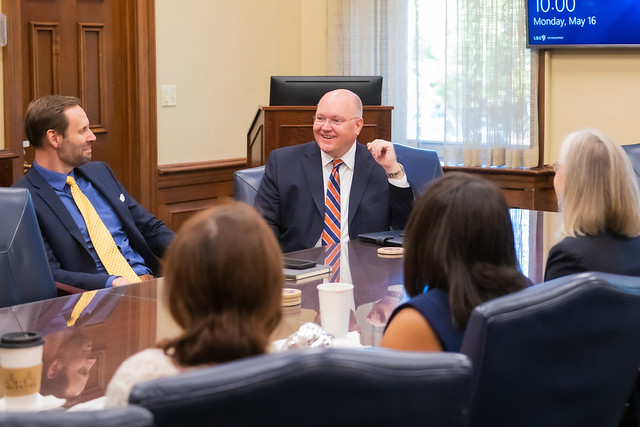 Christopher B. Roberts—who began as Auburn’s 21st president on Monday—met with several groups on campus on his first day in the role, to include members of the University Senate. Roberts will continue meeting this week with students, faculty, staff, administrators, community leaders and others to hear from them and express his great excitement and vision for furthering Auburn as a preeminent university on the national and global stage. 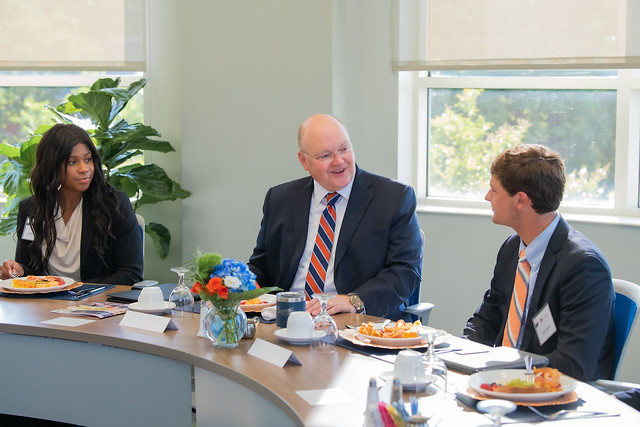 Christopher B. Roberts began his first day as Auburn’s 21st president on Monday meeting with students leaders for breakfast in the Melton Student Center. Roberts will continue meeting this week with students, faculty, staff, administrators, community leaders and others to hear from them and express his great excitement and vision for furthering Auburn as a preeminent university on the national and global stage. 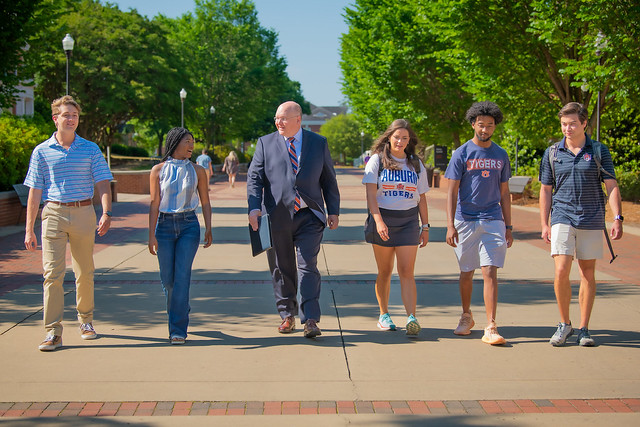 Christopher B. Roberts, who began his first day as Auburn’s 21st president on Monday, walks with a group of students on Auburn’s campus. Roberts will continue meeting this week with students, faculty, staff, administrators, community leaders and others to hear from them and express his great excitement and vision for furthering Auburn as a preeminent university on the national and global stage.