Godfrey, a 1986 industrial engineering graduate who played alongside Charles Barkley as the Tigers reached the Elite 8 before embarking on a highly successful 30-year career in logistics and brand management consulting, was diagnosed with ALS in 2019. He can no longer walk. He can no longer talk.

“But, thanks to these Auburn engineering students,” Godfrey said through the speech generating device he controls with his eyes, “I can still feel the wind in my face.”

Started in 2011, Bo Bikes Bama is an annual charity ride led by two-sport legend Bo Jackson benefiting the Governor’s Emergency Relief Fund. The ride features a 60-mile and a 20-mile course; Godfrey and Smith will travel the 20-mile course, which begins and ends at Jordan-Hare Stadium.

“Building the bike for Gary was a great experience because it was an example of a real-world design and build process—we were working on a tight schedule with a big group,” said mechanical engineering senior Joshua McCreight, the project’s team lead. “I’m really pleased we got it done in time for Gary to participate in Bo Bikes Bama. We were committed to finishing it, not only because it was our senior design project, but because it’s such a great way to share the positive impact of Gary’s story.”

Godfrey and his wife, Carol, who also earned an industrial and systems engineering degree from Auburn in 1986, first approached the college about the project late last year.

“We’re just not willing to give up on the things that we love just because of a bad break like ALS,” said Carol, who will ride the event’s 20-mile course option alongside Gary. “Gary’s mind is sharper than ever, allowing him to dream up ideas like riding a bike again.”

After two hectic semesters of nearly nonstop work, that idea is now a reality in the form of a modified cargo ebike with a custom-built frame that includes a hot-swappable battery for continuous operation. Godfrey will sit securely in an enclosure in the front of the bike between two 20-inch tires pushed by the powered rear wheel.

The bike is equipped with three primary sensors—two GoPro cameras and a so-called “twitch switch”—that will allow Godfrey’s support team, including Carol, to monitor his vital signs during the race. The twitch switch will be attached to Godfrey’s cheek and connected to a light and siren system allowing him to signal the team via the slight facial mobility he maintains if he is in distress. He will be secured to a racing seat donated by Pilcher Automotives with a five-point harness and his head will be supported with a HANS device typical of motorsports safety.

For an initial test ride, the team reached out to Auburn senior tight end Luke Deal, who at 6 feet 5 inches tall and 260 pounds, could nearly replicate Godfrey’s 6-foot 8-inch, 290-pound frame. Deal’s father Chris was diagnosed with ALS in early 2021.

Celebrity pre-rides intended to showcase the design team’s final product will take place Saturday from 9-9:45 a.m. at the main entrance to Neville Arena on the Auburn University campus. Auburn Head Football Coach Bryan Harsin, Auburn University President-elect Christopher B. Roberts and Auburn Mayor Ron Anders will steer Godfrey down the pedestrian walkway leading to the Haley Center to the statue of Bo Jackson in front of Jordan-Hare Stadium and back.

“We are living out our own version of what it means to live with ALS, and we are so grateful for the amazingly bright young people in the Samuel Ginn College of Engineering who are on this ride along with us,” Carol said. “Gary always challenges us to ‘make today your best day.’ So, Saturday will be a best day for a whole lot of people.”

“Calling Gary Godfrey an inspiration is an understatement,” Jackson said. “Even with ALS, he’s still committed to helping others. And Auburn students have been committed to helping him. That’s what the Auburn family is all about. I’m really glad he’s riding again this year.” 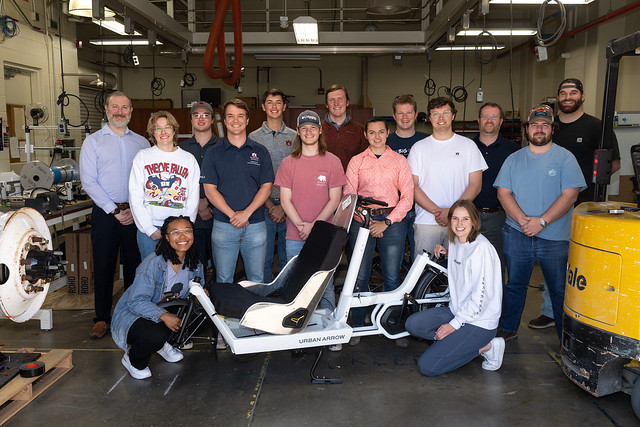 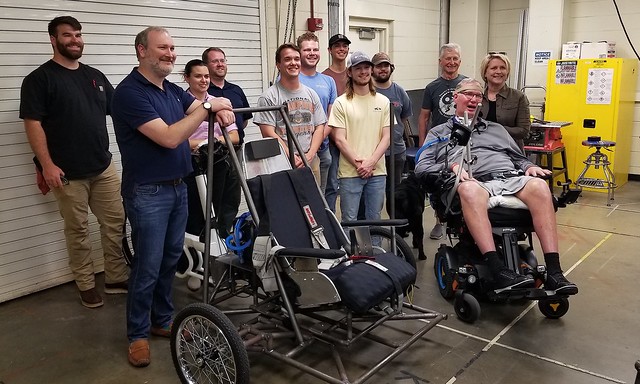