Three outstanding alumni of Auburn University’s College of Veterinary Medicine—Clayton Hilton ’97, Gregory Daniel ’83 and the late Robert Lofton ’72—were honored as the 2022 winners of the Wilford S. Bailey Distinguished Alumni Awards during a ceremony April 7.

The award is the highest honor given to Auburn College of Veterinary Medicine alumni to recognize their professional accomplishments in veterinary medicine, outstanding contributions to their communities and the overall advancement of animal and human health.

It is named to honor the late Wilford S. Bailey, who held a 50-year continuous faculty appointment at Auburn, serving in positions ranging from veterinary instructor to university president. A 1942 graduate of the college, Bailey was the first recipient of the college’s Distinguished Alumnus Award. Following his death in 2000, the award was named in his honor. Awardees are recognized in three areas of eligibility: public policy and research, academia and private practice.

Hilton was named the 2022 Bailey Award recipient in public policy and research. He earned both a bachelor’s degree in wildlife biology and a master’s degree in wildlife ecology at Auburn before graduating with a doctor of veterinary medicine in 1997. He later served as staff veterinarian at the Montgomery Zoo and on the faculty at Auburn before moving to Texas where he held several positions including veterinarian at the Abilene Zoological Park. In 2008, he returned to Alabama as staff veterinarian at the Birmingham Zoo and held several positions there before joining the faculty at Texas A&M University-Kingsville in 2014.

Hilton is currently a professor and the Jo and Bruce Gunn Endowed Director of Veterinary Technology in the Department of Animal Science and Veterinary Technology at Texas A&M University-Kingsville. In addition, he serves as wildlife veterinarian at the Caesar Kleberg Wildlife Research Institute and unit manager at the Alkek Captive Ungulate Research Facility, both in Kingsville.

Hilton has been honored with various awards for his many achievements, including the American Association of Zoo Veterinarians Presidential Service Award in 2020 and the Dick and Mary Lewis Kleberg College of Agriculture, Natural Resources and Human Sciences Junior Faculty Teaching Award in 2017. He has also been recognized for outstanding service by both the Alabama Veterinary Medical Association and the Tennessee Valley Authority.

“Dr. Hilton’s work as a wildlife veterinarian has included many important roles in zoos and wildlife research institutes,” said Calvin Johnson, Auburn veterinary dean. “His expertise with wildlife in captivity and at the human-animal interface has been vital to the development of sound policy to protect their health and welfare. He is an excellent practitioner of the One Health philosophy.”

Daniel’s teaching and research focus is on nuclear medicine and diagnostic imaging. Over the course of his academic service, he has published more than 120 peer-reviewed articles, authored multiple book chapters and edited one textbook. He has been recognized with numerous previous honors and awards, including the Auburn University Young Achievers Award, the Outstanding Faculty Award from the Tennessee Veterinary Medical Association, the Distinguished Virginia Veterinarian Award from the Virginia Veterinary Medical Association, the Virginia and Edward Thompson Award from the Virginia-Maryland College of Veterinary Medicine, the Pfizer Award for Research Excellence and the Chancellor’s Award for Research Excellence from the University of Tennessee.

“Dr. Daniel is an exceptionally skilled and versatile academic leader, having served as a faculty member, service director, department head and interim dean over the course of his career,” said Johnson. “His service in academia has connected extensively with private practice, organized veterinary medicine and biomedical research, and he has received some of the nation’s most prestigious awards for excellence in each of these domains. His dedication to veterinary students and education are perfectly aligned with Dr. Bailey’s legacy and position him as a worthy recipient of this award.”

The late Robert Lofton was named recipient of the 2022 Bailey Award in private practice. Lofton earned a bachelor’s degree in animal science from Louisiana State University before completing a doctor of veterinary medicine from Auburn in 1972. Following graduation, he founded University Animal Clinic in Lake Charles, Louisiana, where he practiced for the next 36 years. He joined the Auburn faculty in 2013 as an assistant clinical professor in the Department of Clinical Sciences. During his five-year tenure at Auburn, he was a principal developer of the Auburn University Veterinary Clinic, the Auburn Veterinary Academy and the Hoerlein Hall Spay-Neuter Program.

Lofton, Louisiana Veterinarian of the Year in 1999 and a former chair of the Veterinary Advisory Council at Auburn, served on the board of directors of the American Animal Hospital Association from 2003-08. He was also a Diamond Level Member of the Auburn Vet Med Centennial Club. He and his wife, Lela, established the Robert M. and Lela Lofton Endowed Scholarship fund in 2017. He was also elected to the Opelika, Alabama, City Council in 2020. Lofton fought valiantly against a rapidly progressing disease in 2021 and passed away in January 2022.

“Dr. Lofton was a truly inspiring graduate of our college,” said Johnson. “He derived great joy from teaching and his contributions to Auburn will last for many years through his students’ success. Although his life was shortened by a tragic disease, Dr. Lofton left a permanent mark on countless people who had the good fortune of learning from and working alongside him.” 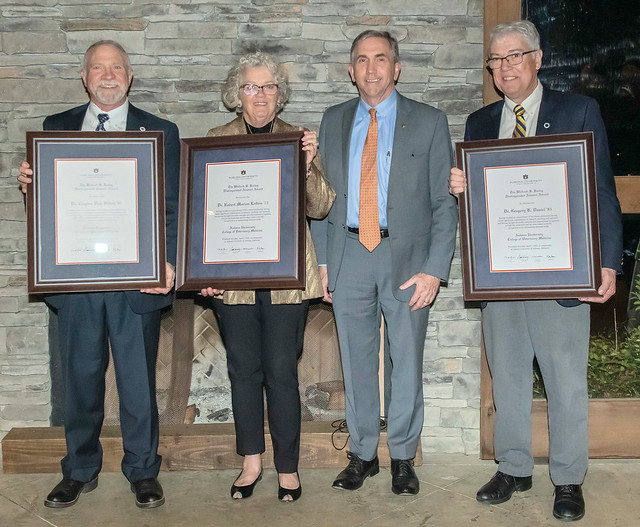