Auburn University is ranked in the top 11% of U.S. research institutions, coming in at No. 100 among 915 universities, according to the National Science Foundation’s recent Higher Education Research and Development, or HERD, Survey. Among public universities, Auburn is ranked No. 67 out of 415 institutions.

“Auburn’s ranking among the nation’s top 100 research institutions is a significant accomplishment,” said James Weyhenmeyer, Auburn vice president for Research and Economic Development. “Our innovative researchers have remained committed to engaging in impactful research even during the challenges of a global pandemic. Their dedication and ingenuity are reflected in Auburn’s rise in the rankings.”

During the five-year period of 2016-20, Auburn’s annual research expenditures increased from $152.4 million to $255.3 million, resulting in a rankings jump of 26 places. Among Southeastern Conference universities, Auburn had the highest percentage increase in research expenditures over that time period: a jump of 67.5%.

For universities without a medical school, Auburn ranked No. 61 nationally and No. 1 in the state. Auburn also was highly ranked nationally in a number of specific fields of research, including No. 54 in engineering, No. 54 in mathematics and statistics and No. 93 in physical sciences, all tops in the state.

A hallmark of Auburn’s research is the diversity of its funded projects. Highlights include:

In addition to the high ranking in the NSF HERD Survey, Auburn is recognized by the Carnegie Classification of Institutions of Higher Education as a top-level, or R1, university with “very high research activity.” 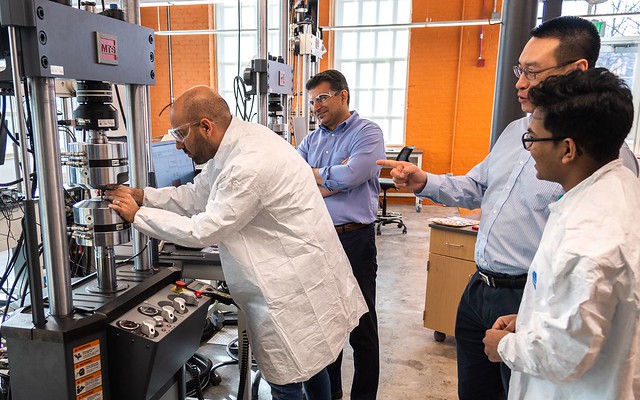 Auburn University is ranked in the top 11% of U.S. research institutions, coming in at No. 100 among 915 universities, according to the National Science Foundation’s recent Higher Education Research and Development, or HERD, Survey. Pictured, scientists in Auburn’s National Center for Additive Manufacturing Excellence conduct fatigue testing on an additively manufactured part.