Forehand encouraged graduates to expect more from themselves than anyone else, develop mental toughness through hard work, learn from overcoming adversity, create opportunities for themselves and their colleagues and to enjoy the journey.

“You will find discoveries along your journey that will give you the motivation to set that higher goal or standard for yourself,” Forehand said. “At some point, you will have to rely on your instincts and intuition when the right decision is not clear. If you want to create opportunities, you are going to have to continue to learn and continuously reinvent yourself to remain relevant in our economy and society.”

Friday night’s address also included the official conferral of more than 2,000 degrees by Auburn Board of Trustees member Michael DeMaioribus, as well as the group recognition of undergraduate students graduating with academic honors and an official welcome to the Auburn Alumni Association from President Regenia Sanders.

“Remember, it’s not too late to set higher expectations for yourself,” he said. “Embrace mental toughness to overcome whatever obstacles are in your way. Don’t just solve problems, use a ‘rational optimism’ to believe that we have not yet seen the world’s biggest discoveries.

“Be a disruptor, reinvent yourself frequently, and above all, enjoy the journey. And remember the last sentence of the Auburn Creed: ‘I believe in Auburn and love it.’”

Forehand led Accenture to a top 50 global brand ranking during his tenure, orchestrating its initial public offering, or IPO, in 2001. Forehand increased Accenture’s revenue from $9.6 billion to $13.7 billion and added nearly 40,000 employees to its workforce.

He also served as a senior advisor with the private equity firm Kohlberg, Kravis and Roberts and has served as chairman of the board at First Data Corporation and Aricent.

Forehand also offered leadership advice to the more than 2,000 graduates assembled at the stadium.

“Real leadership means creating an environment where everyone celebrates the successes of their peers, not undermining them to get ahead,” Forehand said. “It means creating an environment where each team member performs to the highest of their potential and takes pride in reaching shared goals. Real leaders recognize they must be great teachers, who know the importance of sharing knowledge and wisdom so that they become a force multiplier and impact the world in a positive way.”

Forehand was named Consulting Magazine’s Consultant of the Year, Information Week’s 15 Most Inspirational Leaders in Information Technology, Computerworld’s Smithsonian Honors Program, CRN’s Top 5 CEOs and the Institute of Industrial Engineer’s Captains of Industry. He has served on the Auburn University Foundation Board and was co-chair of Auburn’s $1.2 billion campaign that concluded in 2018 and has endowed numerous scholarships and professorships at Auburn.

The university capped Friday night’s program with a thrilling fireworks show, and all graduates were able to have their photos taken on stage at Pat Dye Field and their names displayed on the jumbotron in Jordan-Hare Stadium. Saturday’s commencement ceremonies for undergraduates were moved to Auburn Arena due to inclement weather.

Walter “Walt” Woltosz—a two-time Auburn University graduate—received an honorary Doctor of Science from the College of Engineering on Friday night. The honor, the 160th honorary degree in Auburn history, was unanimously approved by the Auburn Board of Trustees in its April meeting for Woltosz’s “service to the university, state and nation, and for service to mankind.”

Woltosz and his wife, Ginger, founded Words+ Inc., a leader in developing augmenting communications systems for people with severe disabilities, including Sir Stephen Hawking. Hawking used the Words+ Equalizer and Words+ EZ Keys programs to continue his groundbreaking work and write several books, including “A Brief History of Time.”

He also founded Simulations Plus Inc., where as chairman and former CEO, he oversaw the advancement of one of the nation’s premier high technology companies dedicated to providing leading-edge pharmaceutical simulations and modeling software in health care. As a leading authority in those fields, Woltosz has published dozens of articles in highly respected publications such as the American Association of Pharmaceutical Scientists, or AAPS, Journal and the Journal of Computer-Aided Molecular Design, where his work has been widely recognized as being highly innovative and pioneering.

“I’m very happy to be receiving this, and it’s quite an honor,” said Woltosz, and accomplished aviator who holds an Airline Transport Pilot certificate, as well as a helicopter rating. “Auburn is a magical place that gets into your blood. My blood’s red, but I swear it’s orange and blue if you put it under the right light.”

Woltosz and Ginger have generously donated to numerous areas of Auburn University, including the Samuel Ginn College of Engineering, Gogue Performing Arts Center, Auburn Athletics, College of Veterinary Medicine, College of Architecture, Design and Construction, the Division of Student Affairs and War Eagle Motorsports. The Woltoszes are members of Auburn University’s 1856, Petrie and Foy Societies and Athletics’ Pat Dye Society, as well as the College of Engineering’s Eagles, Keystone and Ginn Societies.

A total of 2,021 graduates participated in the commencement celebrations, including 406 master’s degrees, 105 doctorates and 17 specialist degrees. The remaining 1,493 were bachelor’s degrees. 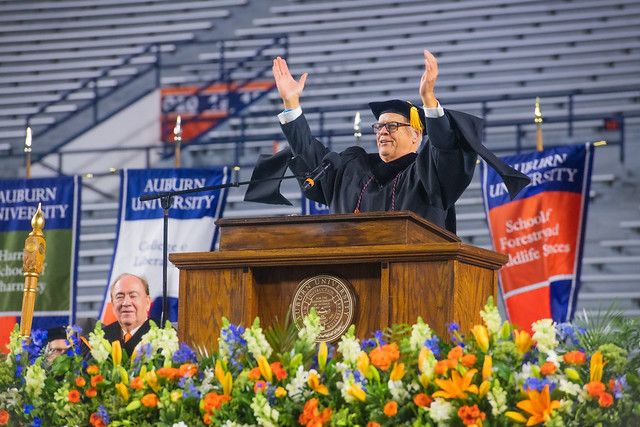 Auburn alumnus Joe Forehand, the former chairman and CEO of Accenture, was the keynote speaker at the university's fall commencement ceremony on Dec. 10. 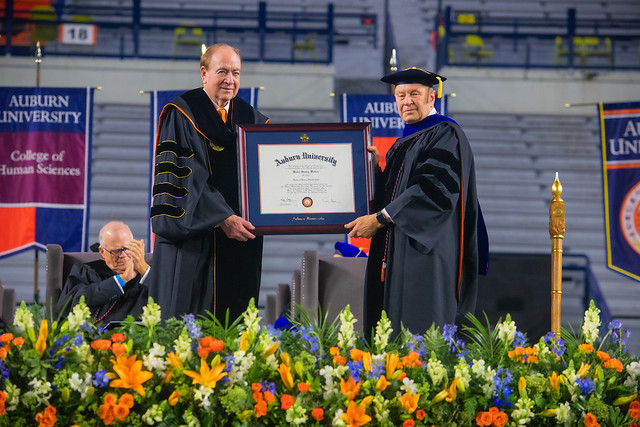 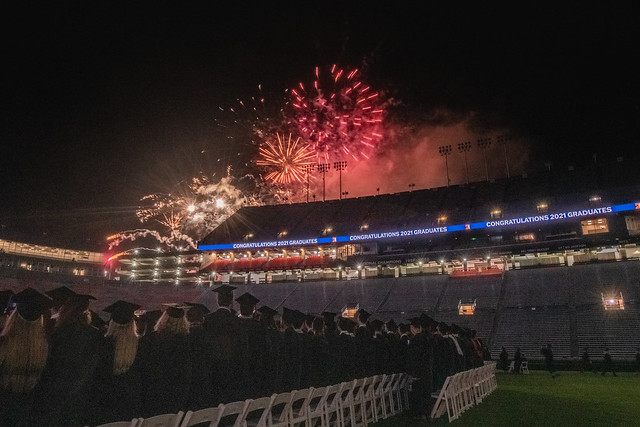 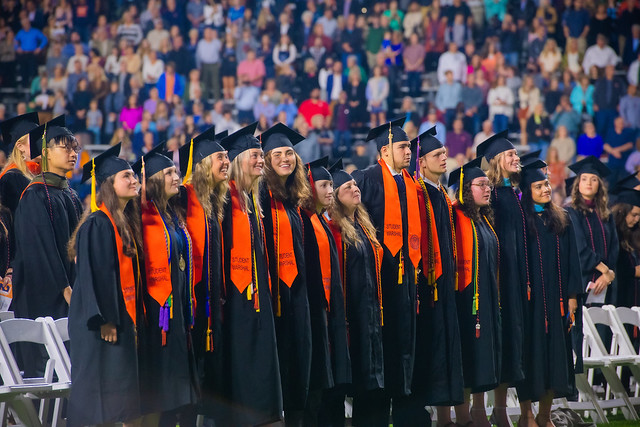