As the attention of the state’s football fans turns to the Iron Bowl this week, a group of 50 student veterans will be putting the rivalry aside as part of Operation Iron Ruck.

Held annually since 2018, Operation Iron Ruck is a 151-mile march from Bryant-Denny Stadium to Jordan-Hare Stadium. This year’s event will take place Nov. 24-27, and members of the Auburn Student Veterans Association, or ASVA, will walk alongside members of the University of Alabama’s Campus Veterans Association, or ACVA, to raise awareness about suicide rates among veterans.

“We currently lose 22 veterans a day in the United States to suicide,” said Andy Cole, media director for ASVA. “These two groups will walk 151 miles, with each person carrying a 22-pound ruck sack. Our goal through this event is to bring awareness to veteran suicide and to support causes that directly contribute to reducing that number.”

The weight the veterans will be carrying is as symbolic as the march itself.

“The weight that we carry in our packs is made up of items that we will be donating to the Tuskegee Homeless Veterans Shelter,” Cole said. “This consists of things like toiletries, towels, socks and other necessities that can make their lives a little easier. Any monetary donations received will go to Mission 22 and Three Hots and a Cot, both of which are organizations that help veterans by means of donations. On the ruck, we will be carrying the game ball, along with 22 sets of dog tags in remembrance of the ones that we have lost.”

The event has grown since it began four years ago. At that time, organizers were seeking a way to address the veteran suicide epidemic in the United States.

Veterans from each school got together and did the march. Now, the event has grown to be much larger.

“We are now partnered with Alabama's Challenge, an official initiative of the Alabama Department of Veterans Affairs,” Cole said. “Through this we are officially recognized by the state for our efforts to help lower the current rates of veteran suicide.”

The veterans participating from Auburn University have been preparing for the event by training with the School of Kinesiology’s Warrior Research Center.

“We have worked with the Student Veterans Association for 12 weeks in preparation for Operation Iron Ruck as their performance optimization team,” said doctoral student Monaye Merritt. “We resistance train twice a week, held yoga once a week and have held four workshops.”

Merritt, along with doctoral students Philip Agostinelli and Morgan Smith, developed the training programs to ensure the student veterans would be prepared for Operation Iron Ruck.

“Workshops have covered a range of components: wellness, nutrition, hydration, sleep, etc., longevity—participating in movement for leisure—and mindset,” Merritt said. “We have built a great relationship with the Student Veterans Association, not just through training, but also tailgating together and joining each other during football games. We intend to continue to make the performance optimization program available to them in the spring.”

In addition to helping the veterans train, Merritt, Agostinelli and Smith will be participating in the last portion of the ruck.

“Not only do we implement training to help them perform and succeed, but we want to be there with them supporting them along the way,” Smith said. 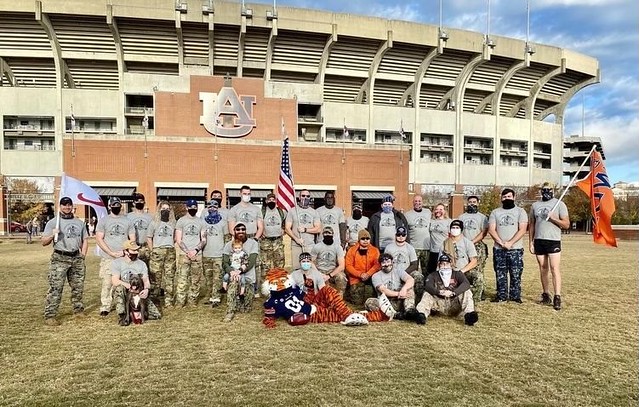 A group of student veterans from Auburn University and the University of Alabama will walk a 151-mile journey from Bryant-Denny Stadium in Tuscaloosa to Jordan-Hare Stadium in Auburn carrying 22-pound ruck sacks to raise awareness for veteran suicide. 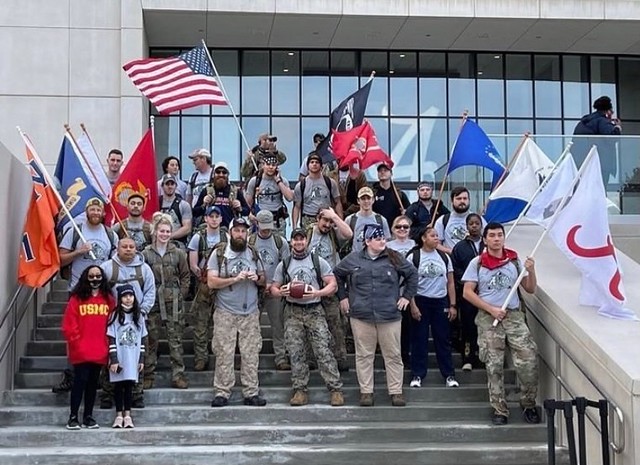 Student veterans from Auburn University and the University of Alabama outside Bryant-Denny Stadium during a past Operation Iron Ruck, which raises awareness for veteran suicide.