In some regions of Alabama and the southeastern U.S., wild turkey populations have declined for the past 10 to 15 years. Will Gulsby, associate professor of wildlife management in Auburn University’s School of Forestry and Wildlife Sciences, is determined to identify these areas and develop solutions to reverse the decline.

Gulsby’s research is funded by the Alabama Wildlife Federation and Turkeys for Tomorrow, a Mississippi-based conservation nonprofit organization that began operating earlier this year.

“Wild turkey hunting has important economic and cultural benefits to Alabama and beyond,” he said. “The economic impact of hunting, fishing and wildlife-watching in Alabama totals $3.88 billion per year, and wild turkeys are one of the most sought-after game species in the state.”

Conservation funding generated by the purchase of hunting licenses is critical to conserving wildlife and their habitats throughout the state.

Gulsby is gathering data from public as well as private lands—which are rarely included as wildlife population study sites—using autonomous recording units across the nearly statewide region covered in the study. The units record all ambient sound within their vicinity during preprogrammed times throughout the day.

To analyze these data, researchers will use a type of artificial intelligence known as a convolutional neural network, made possible by software developed by project collaborator Michael Chamberlain of the University of Georgia’s Warnell School of Forestry and Natural Resources.

“Coupling these technologies allows us to determine the timing of turkey reproductive behaviors at an unprecedented scale by maximizing data-processing efficiency,” Gulsby said.

The project is both multifaceted and broadly scoped. The team’s first priority: defining the characteristics of areas that have abundant versus low turkey numbers and determining the timing of turkey gobbling across the state and how it is influenced by hunting pressure.

“Gobbling plays a role in mate attraction, so knowing when birds are gobbling can be used to determine the timing of reproductive activity,” Gulsby said.

The project has two more objectives as well: determining the proportion of male turkeys capable of fertilizing clutches of eggs and capturing and fitting hens with GPS tracking devices that will monitor when they nest, the success and failure rates of their nests, the causes of nest failure and the survival of the young turkeys after they hatch. Researchers will also collect tissue samples for subsequent disease testing.

“Having more information on aspects of turkey reproduction allows us to better structure hunting regulations to match the species’ biology, ensuring sustainable populations into the future,” Gulsby said.

“We were impressed with Dr. Gulsby’s thoughtful assessment of research opportunities that would help expand available information and further inform landowner and land manager decisions on how best to manage for wild turkeys,” Gothard said. “The information gained through this research will further broaden the available information that landowners and land managers can utilize when making decisions about proper management and harvest of wild turkeys in Alabama and beyond.”

Ron Jolly, co-chairman of the board of Turkeys for Tomorrow, said Gulsby’s work will shine a much-needed light on the topic.

“Turkeys For Tomorrow was founded by a group of turkey hunters who are concerned about the decline of wild turkeys in the United States,” Jolly said. “We hope these studies reveal answers to questions that experts like Dr. Gulsby believe play a role in the decline of wild turkeys. We can then share those answers with land managers, both public and private, who can apply them across the landscape and begin reversing this downward trend.”

Dean Janaki Alavalapati of the School of Forestry and Wildlife Sciences is enthusiastic about the research.

“Dr. Gulsby’s unique, wide-ranging research will yield valuable insights into the reasons the turkey population has been in decline and, most significantly, lead to steps that can be taken to reverse that trend, benefiting conservationists, hunters and the state in general,” Alavalapati said. “His work is an example of how our faculty’s state-of-the-art research provides real-world solutions.” 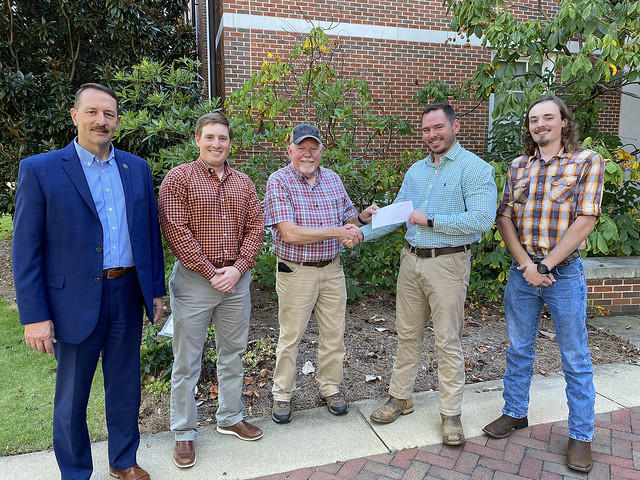 The Alabama Wildlife Federation and Turkeys for Tomorrow are sponsoring an Auburn University research team to study the cause and potential remedy for declining wild turkey populations in regions of Alabama and the southeastern U.S. Pictured, from left, during a recent check presentation at Auburn University are Alabama Wildlife Federation Director Tim Gothard, Carter Weeks and Ron Jolly of Turkeys for Tomorrow, Will Gulsby, lead researcher in the School of Forestry and Wildlife Sciences, and graduate student Matthew Day, who will assist with the project.

An Auburn University research project is looking into the decline of wild turkey populations.

The Auburn University College of Forestry and Wildlife Sciences is a flagship institution for natural resources-based degrees including natural resource management, geospatial and environmental informatics and sustainable biomaterials and packaging. The school serves as the backbone for Alabama’s $30 billion-plus forest, wildlife and natural resources related enterprises. Its mission is to create next-generation professionals and leaders, to develop new knowledge and disseminate science-based solutions to our clientele to improve the social, economic and environmental well-being of citizens in Alabama and beyond.