A popular botanical dietary supplement in the United States, açaí is known for numerous health benefits. However, with prevalent use of the supplement among cancer patients, the National Institutes of Health has awarded Auburn University’s Angela Calderón a three-year, $440,590 grant to study the interactions between the supplement and anticancer drugs.

Titled “Unravelling the mechanism of acai BDS-anticancer drug interaction: A preliminary approach,” the R15 grant is supported by the National Center For Complementary and Integrative Health and the Office of Dietary Supplements of the National Institutes of Health.

Additionally, the project is funded as part of the Research Enhancement Award Program for Health Professional Schools and Graduate Schools. As part of the program, Calderón, an associate professor in the Harrison School of Pharmacy’s Department of Drug Discovery and Development, is charged with exposing undergraduate and/or graduate students at health professional schools or graduate schools to meritorious research projects and to strengthen the research environment of the institution.

“My R15 focuses particularly on training female and underrepresented minority students for biomedical sciences research careers,” said Calderón. “Students will receive training in various disciplines such as pharmacognosy and natural products chemistry, pharmacology, pharmacokinetics and statistics. The distinct contribution of this project to students training is its interdisciplinary nature.”

“Numerous claims about açaí’s potential to complement conventional chemotherapeutic drugs have been made,” said Calderón. “Açaí’s chemoprotective activity against cancer has been attributed to its anti-inflammatory, antioxidant, antiproliferative and proapoptotic properties in preclinical models.”

For Calderón, being able to incorporate more women and underrepresented minorities on the project is important in promoting and encouraging diversity in the biomedical workforce.

“As the United States population becomes increasingly diverse, reflection of that diversity among the biomedical research workforce is vital,” said Calderón. “The increase of diverse backgrounds of scientists can enhance the diversity of ideas for scientific progress.” 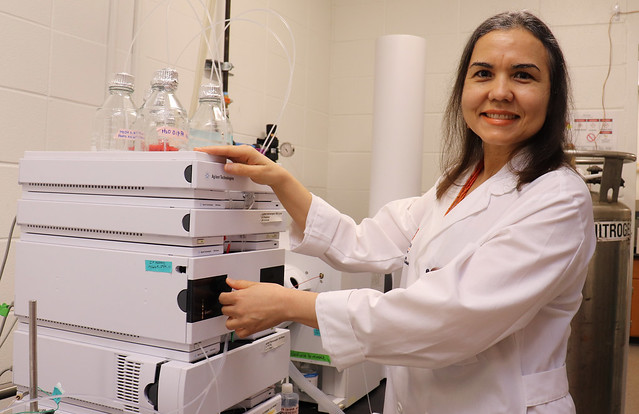 Angela Calderón, an associate professor in Auburn’s Harrison School of Pharmacy, was awarded an R15 grant from the National Institutes of Health to study the interactions between the supplement, açaí, and anticancer drugs. She will also use the grant to train female and underrepresented students for biomedical sciences research careers.