Breakthrough climate research led by Auburn University researchers was published this week in Proceedings of the National Academy of Sciences of the United States of America, or PNAS.

Professors Hanqin Tian and Susan Pan of Auburn's School of Forestry and Wildlife Sciences, and Hao Shi, a postdoctoral fellow in the school’s International Center for Climate and Global Change Research, worked with a group of international climate scientists to focus on a predictive understanding of how increasing global aridity velocity impacts species range.

“This study was inspired by animal and human behaviors in response to water deficits,” said Tian, who also directs the center. “Just as nomadic people throughout history have migrated long distances or warred with farming neighbors to survive long-term drying, animals continue to migrate to find food and water in dry seasons.”

The study, "Terrestrial biodiversity threatened by increasing global aridity velocity under high level warming," was published in PNAS on Aug. 30.

“For the first time, this study investigated the global aridity velocity in the past decades and in the future,” said Pan, director of the GIS and Remote Sensing Laboratory in the School of Forestry and Wildlife Sciences.

The researchers analyzed changes in the speed and direction of global aridity and the corresponding distributions of terrestrial vertebrates and plants in the past—from 1979 to 2016—and the future, specifically from 2050 to 2099. They also used satellite imagery to calculate spatial shifts in vegetation greenness from 1982 to 1986 and from 2011 to 2015.

The study found that both agricultural and urban areas showed a mean drying velocity in history that is increasingly affecting humans’ food production system and living space.

Researchers pointed out that by the middle of the 21st century, the global average rate of aridity could reach 0.75 kilometers per year and in some areas of serious aridity exceed 8 kilometers per year. That means all affected plants and animals worldwide may need to move an average of 37.5 kilometers between 2050 and 2099. In highly arid regions, species migration of more than 400 kilometers, about the length of New York state, would be required to adapt to droughts, leaving some species, especially amphibians, unable to adapt quickly enough. Amphibians will suffer the largest aridification speed against plants, birds and mammals, the study found.

“The majority of the globe is projected to experience drying, especially in the Amazon region, which is the Earth’s biodiversity champion,” Shi added. “Some hotspots of the southeastern U.S., Europe and tropical Asia, which generally receive substantial precipitation and are considered water-rich, likely would experience increasingly extreme droughts and other hotspots in arid areas such as southern Africa and North America may get drier in the future.”

“Past studies have painted the image that species have to be ‘running to stand still’ to remain in a suitable climate under future temperature changes. Here, we show that the speed of aridity changes expected under climate change requires species to ‘run faster and into different directions’ than expected from temperature changes alone,” Reyer said.

The migration patterns of vegetation greenness tracked changes in aridity velocity in multiple regions. Among terrestrial animals, amphibians are projected to be most negatively impacted by future changes in global aridity velocity compared to historical values.

This research has broad significance on several levels.

“These findings can inform the design of protected area networks to avoid those areas exposed to high drying speed,” said co-author Bojie Fu, a member of both the American Academy of Arts and Sciences and the Chinese Academy of Sciences.

“In those agricultural regions facing a higher drying speed, breeding and management should be improved to correspond to water stress,” Pan added. “For cities that would experience long-term drying, infrastructure for water supply to both humans and urban vegetation should be well equipped, and water-saving policies should be implemented.”

School of Forestry and Wildlife Sciences Dean Janaki Alavalapati said this Auburn-led research is a significant addition to the ever-growing body of knowledge on climate change.

“Climate change is likely to become one of the most significant drivers of biodiversity loss in the second half of the 21st century, and this Auburn-led research presents a stark picture of what is to come as well as what actions need to be taken,” Alavalapati said. “Conserving and sustainably managing biodiversity are essential components of natural climate solutions.”

Tian emphasized the need for action.

“This study underscores that strong and immediate greenhouse gas mitigation is required to avoid climate threats to biodiversity, agriculture and cities that provide people with essential goods and services,” Tian said. 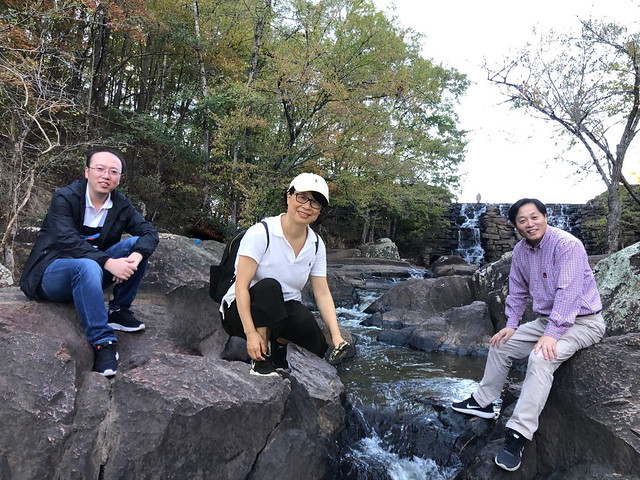 Professors Hanqin Tian, right, and Susan Pan, center, of the Auburn University School of Forestry and Wildlife Sciences, and Hao Shi, left, a postdoctoral fellow in the International Center for Climate and Global Change Research at Auburn, led a breakthrough climate research study published this week in Proceedings of the National Academy of Sciences of the United States of America, or PNAS.

According to a recently published climate research study by Auburn University Professors Hanqin Tian and Susan Pan of the Auburn University School of Forestry and Wildlife Sciences, and Hao Shi, a postdoctoral fellow in the International Center for Climate and Global Change Research at Auburn, the majority of the globe is projected to experience drying, especially in the Amazon region, which is the Earth’s biodiversity champion. The map indicates speed distribution and hotspots of global aridity velocity during 2050 through 2099 under climate change scenario (RCP8.5). The red colors indicate drying (negative) while the blue colors indicate wetting (positive), and the unit is kilometer per year.