Qualifying 11 two-man teams to compete in the College B.A.S.S. National Championship is no small feat, but that’s exactly what the Auburn University Bass Fishing team accomplished this season. It was the latest in a long line of accomplishments the team has achieved within the previous year.

The 22 Tigers heading to the College B.A.S.S. National Championship Aug. 12-14, on the St. Lawrence River in New York, is the biggest group Auburn has ever qualified in a single season for the national championship. The team also won all five Southern Collegiate Bass Trail tournaments and swept the top three places at the Alabama Bass Nation College State Championship this season.

The sport of tournament bass fishing has been on a steady rise over the past few years and is opening opportunities for young anglers around the country. Auburn’s club is providing these anglers chances to develop their skills and showcase their talents on a national level. In doing so, the team is making quite a name for itself across the U.S.

The team’s continued success is attracting many young anglers to come and see what Auburn is all about. Not only is the club attracting talented fishermen to Auburn’s campus, but it is bringing them from far and wide, including such places as California, Canada and even Zimbabwe.

For many of these fishermen, the team is what drew them to the university.

“Although there were other factors that drew me toward Auburn, the fishing team was definitely one of the biggest deciders for me,” said Sam Harvey, a Zimbabwe native studying business administration. “It just had something that I felt no other teams I was looking at did, and that was a drive from the team members themselves to help and grow the team to where it is today.”

Harvey is not the only team member coming to Auburn from outside the U.S. Rob Cruvellier, a senior studying business administration, came to Auburn from Montreal, Canada.

“I narrowed down my universities by which university had the best team, while also being close to lakes that can help me improve my fishing abilities by going out for a few hours after class,” Cruvellier said. “And Auburn was really the best fit.”

Coming from such great distances can be daunting, but it was a challenge that many members of the team were ready to face.

“Auburn was initially very different for me,” Harvey said. “My eyes were wide open, to say the least. I come from a smaller community back home in Africa, and although we have some of the best largemouth bass fishing there, it just doesn’t compare to the industry of tournament bass fishing in the U.S. I had to adapt, for sure.”

Being part of Auburn’s fishing team helped Harvey adjust to a new country.

“To understand a new culture I had never experienced and all new people, it was a very fun yet challenging first semester,” Harvey said. “The fishing team has definitely been the best thing that’s happened to me and helped me transition a lot easier. In general, Zimbabwe is much smaller than the U.S., thus, the fishing community doesn’t stretch as wide. We have some bucket-list bass fishing destinations; however, the U.S. has all the dreams of becoming a professional fisherman.”

The culture surrounding bass fishing in Alabama and the U.S. is much deeper and more ingrained compared to other countries, including Canada. The fact that it has gained popularity and support at the collegiate level helps create more opportunities for young anglers.

“It’s a lot more common,” Cruvellier said. “Everybody in Alabama fishes, but in Montreal, you tell somebody that you fish bass tournaments, and they pretty much have no idea what you’re talking about. It’s just a huge deal in Alabama, and anybody who wants to really make it professionally and really have it be a huge part of their lives has to fully immerse themselves in it.”

Former team president Logan Parks attributes much of their success to being able to recruit new members with diverse backgrounds.

“That definitely is another reason why I think we’re so successful,” said Parks, who recently won the Carhartt College B.A.S.S. Tour Stop No. 4 with his partner, Tucker Smith. “We have kind of created a super team. We’ve got people from all across the country and outside of the country who all have different skill sets and mindsets. They approach fishing competitively in different ways, and they’re all very successful in their own ways.

“Having all those kinds of different minds together on the same team creates a very successful thing for us.”

With the rise in popularity of competitive bass fishing over the past few years, it is becoming more common for young anglers to base their college decision on their school of choice’s fishing team.

“I do see that,” Parks said. “The more people know about us, the farther the name Auburn Fishing gets spread. I do see a lot more anglers coming to Auburn in the future for the fishing team, and not just from the U.S.”

Riding its wave of success, the Auburn bass fishing team is becoming a prominent name in the tournament fishing world, but success is nothing new for the anglers.

“We have some of the most notable alumni in the competitive professional fishing world,” Parks said. “We’ve got Steve Kennedy, an Auburn graduate who’s been around the professional scene for a long time. Then we’ve got Jordan and Matt Lee, who are both brothers and fished for Auburn, and Jordan went on to win Bassmaster Classic, which is basically the Super Bowl of bass fishing, two years in a row. So, that definitely puts Auburn on the map big-time for high school kids who want to come here and fish.”

Auburn’s team has grown considerably in recent years. The team now sits at almost 100 members, and its growth appears to be continuing steadily. Club Membership Chair Sam Hanggi explained their recruiting process for any young anglers looking to join the team.

“We rely on our social media presence to recruit new members, whether it be our Instagram, YouTube series, etc.,” said Hanggi. “We also reach out to other successful high-school competitors directly with the hopes of getting them interested in joining the team.”

Hanggi is responsible for talking with potential members, answering any questions they might have and making them feel like a welcomed member of the team. Of course, he will also take prospective members out for some fishing as well.

After becoming a member of the team, there are a few things to expect. There are a set of qualifiers at the beginning of the year that are a series of five tournaments that determine rankings within the Auburn team. There are also weekly meetings where the team discusses anything important that’s going on.

Any angler, regardless of rank, receives payment for hotels at every event, as well as gas reimbursements based off tournament results. The team also has numerous social outings throughout the year with the purpose of team bonding. Any anglers interested in joining the team can contact Hanggi by email.

“With our lack of ability to provide scholarships, it makes our recruitment process much more difficult,” said Hanggi. “However, due to our success as a team and the hard work of our members, we have continued to recruit some of the highest-placing individuals in college fishing.” 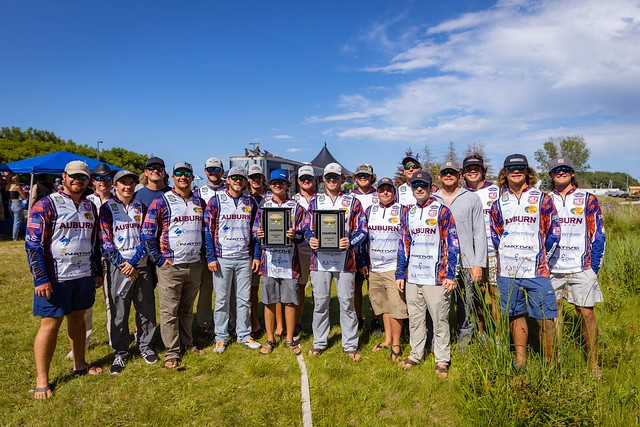 Numerous members of the Auburn University Bass Fishing team came out to support Logan Parks and Tucker Smith during final weigh-ins when they were crowned champions at the Carhartt Bassmaster College Series at Saginaw Bay. 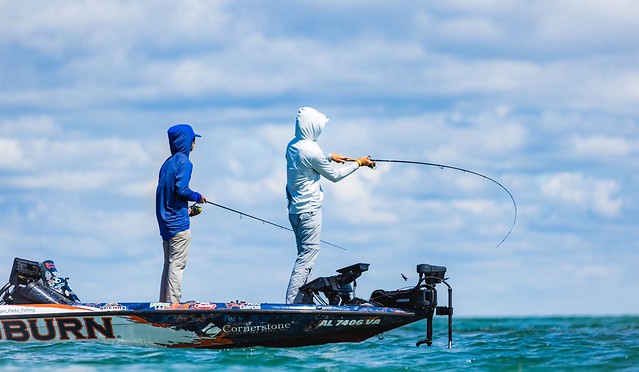 Members of the Auburn University Bass Fishing team spend countless hours on the water honing their skills ahead of tournaments. 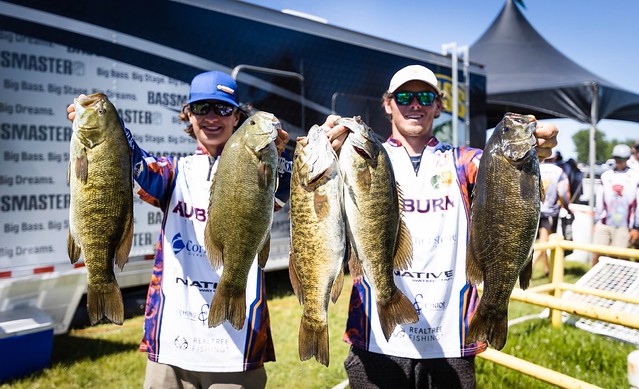