Bessemer native embraces Auburn Family, garners more than an education from the Plains

Jailin Sanders was determined to receive more than a top-notch education when he came to Auburn University.

To develop a well-rounded college experience, the Bessemer native got involved in student organizations within a few weeks of arriving on the Plains.

Sanders, a senior in industrial and systems engineering in the Samuel Ginn College of Engineering, is a member of Auburn’s chapter of the National Society of Black Engineers, or NSBE, where he has served as assistant director of programs and programs chair. He currently serves as senior advisor to the programs chair.

He participates in and serves as an ambassador for engineering’s Academic Excellence Program, or AEP. Launched in 1996, AEP provides academically based programs and activities to strengthen the recruitment and retention of underrepresented students in engineering at Auburn.

Sanders recently finished his term as president of the Black Student Union, or BSU, but he will remain active as a resource to the organization’s cabinet. He previously served as assistant director of events and vice president of programs.

“It is through these organizations and program that I found my support system, the people who would be there for me and understand my experiences on a personal level,” he said. “I credit NSBE, AEP and BSU for allowing me to become the leader I am today.”

Within these groups, Sanders said he found a family that would be with him through the highs and lows of college.

“I wanted to attend an institution that would foster a family-like environment amongst the student body, allow me to continue to grow as a scholar and leader on campus, prepare me for the career field of my choice and be accepting of diverse individuals so that we could learn from one another,” he said. “Unsurprisingly, Auburn has done just that and continues to evolve as we go into the future.”

A path to the Plains

Sanders was in middle school when he first considered engineering as a major in college. A career exploration class revealed he had skills in several areas and various interests. Sanders’ mother encouraged him to consider engineering since it combined a love for math, problem-solving skills and a passion for helping people.

So, Sanders knew what he would study in college; he just needed to get through high school first. At Bessemer City High School, he would excel in and out of the classroom.

By the time he graduated as valedictorian in 2017, Sanders had served as senior class president, vice president of the Student Government Association and a Bessemer City High ambassador and mentor. Additionally, he was recognized for having the most outstanding service in student government with more than 375 community service hours and received the Mayor’s Outstanding Citizenship Award by Mayor Kenneth E. Gulley.

When it came to deciding on a college, Sanders considered the gamut—majors offered, campus resources, student experiences, scholarships and other funding opportunities, location/environment and social climate. He pondered historically Black colleges and universities, or HBCUs, as well as predominately white institutions, or PWIs.

Besides the Auburn sports fans in the family, Sanders had no connection to the Plains. Much of his family are alumni of Miles College, a historically Black liberal arts college in metropolitan Birmingham.

“As I embarked on my own journey of making a college decision, I thought back on all the stories my family told me: The late nights studying in the library to prepare for exams, the good food at the café, the fun adventures they took with their friends and the life lessons learned outside of the classroom,” he said. “It all made me think of where I wanted to have those experiences and make my mark.”

Knowing he would study engineering, Sanders strongly favored what he considered the top three engineering programs in Alabama—Auburn, Tuskegee University and Alabama A&M University. He applied to them and several other universities in the state.

“Auburn stuck out the most because I felt they went the extra mile to make me feel a part of their family,” he said, noting that he received birthday postcards, letters and calls from current students and alumni, as well as a welcome packet with a personalized message from a student recruiter. “No other institution had established such a strong and meaningful connection with me as Auburn did.”

This ultimately solidified Sanders’ decision to attend Auburn, even without a single campus tour.

“With me being a family-oriented person, I wanted to attend an institution that made me feel like I was in a family with the other students across campus,” he said. “And for me, that was Auburn.”

A vision for the future

Sanders came to Auburn with the intention of studying electrical engineering. After a year, however, he took the advice of a close friend and switched to industrial and systems engineering. His minor is business and engineering technology.

“With that degree, I knew I’d be able to solve problems, make people’s lives better by making things more efficient for them, take a business approach to work-related challenges and still have an engineer’s skill set,” Sanders said.

Interestingly, Sanders may never spend a day working as an engineer. His passion for helping others means much more.

Sanders said he has always had this passion, and at a young age, vowed to be “a selfless leader focused on helping and representing individuals that may not have a voice or are underrepresented in any capacity.”

Becoming a leader at Auburn was a logical step, allowing Sanders to do this work on a grander scale. He said he has learned patience when faced with views different from his own, the importance of diversity and inclusion to promote equitable environments and effectively communicating with peers on diverse matters.

“Although I could foster these things in engineering spaces, I feel the call to pursue higher education, specifically student affairs,” said Sanders. “I plan to take my involvement experiences and the wisdom that I gained over the years of being a student leader and work to inspire the next generation of leaders.”

Last year, Sanders was one of several students selected to participate in the Presidential Task Force for Opportunity and Equity. In the wake of nationwide racial violence, Auburn President Jay Gogue established the group of campus representatives to develop recommendations leading to meaningful change at Auburn.

Sanders said he has not personally experienced any race-related issues since arriving at Auburn nearly four years ago. He acknowledged, however, that there have been concerns related to the lack of minority students, specifically Black students, but Auburn is working to move forward.

“I feel the university has become aware of these issues and is now making conscious efforts to resolve them,” he said, citing the support available through the new Black Alumni Council, the Presidential Task Force and other resources across campus.

“I want all students, especially Black and African American ones, to have the opportunity to pursue whatever goals and aspirations they may have while being equipped to be successful leaders throughout society.” 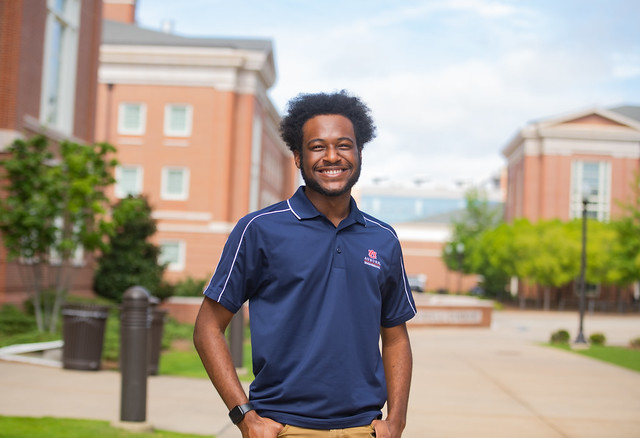 Jailin Sanders of Bessemer, Alabama, is a senior majoring in industrial and systems engineering at Auburn University. He is an active member of the Black Student Union, engineering’s Academic Excellence Program and the Auburn chapter of the National Society of Black Engineers.