Beekeepers across the United States lost 45.5% of their managed honey bee colonies from April 2020 to April 2021, according to preliminary results of the 15th annual nationwide survey conducted by the nonprofit Bee Informed Partnership, or BIP.

These losses mark the second highest loss rate the survey has recorded since it began in 2006 (6.1 percentage points higher than the average annual loss rate of 39.4%). The survey results highlight the continuing high rates of honey bee colony turnover. The high loss rate was driven by both elevated summer and winter losses this year, with no clear progression toward improvement for beekeepers and their colonies. BIP hopes to use the survey results to better understand how colony losses are experienced by beekeepers, and what can be done to reduce losses in future seasons.

Since beekeepers began noticing higher losses in their colonies in the early 2000s, agricultural agencies, researchers, and the beekeeping industry have been working together to understand why and develop best management practices to reduce their losses. The BIP annual colony loss survey, which has been conducted  since 2006, has been integral to that process.

“This year’s survey results show that colony losses are still high,” said Nathalie Steinhauer, BIP’s science coordinator and a postdoctoral researcher in the University of Maryland Department of Entomology. “Not all beekeepers are affected at the same intensity, but the turnover rate of colonies is still overall higher than beekeepers deem acceptable [normal or acceptable turnover is defined at about 20%]. We should remember, however, that loss rates are not the same as population decline. The recent numbers of honey bee colonies in  the U.S. are relatively stable despite those high losses, but that’s because beekeepers invest a lot of time and effort to increase their operation size to mitigate their losses.”

Commercial honey bee operations are essential to agricultural production in the U.S., pollinating $15 billion worth of food crops each year. Honey bee colonies are moved around the country to pollinate important agricultural crops such as almonds, blueberries, and apples. Minimizing their losses and ensuring the health of  both commercial and backyard colonies is critical to food production and supply.

“Beekeepers of all types consistently lose a high number of colonies each year, which puts a heavy burden on many of them to recoup those losses in time for major pollination events like California almonds,” said Geoffrey Williams, assistant professor of entomology at Auburn University and co-author of the survey. “Colony losses remain elevated, and this year’s annual and summer loss rates are among the highest recorded.”

The survey asks beekeeping operations of all sizes to track the survival or turnover rates of their honey bee colonies. This year, 3,347 beekeepers managing 192,384 colonies across the country responded to the survey, representing about 7% of the nation’s estimated 2.71 million managed colonies. This effort helps to keep a finger on the pulse of what is going on with beekeepers to identify why high losses are persisting.

“Though we see fluctuations from year to year, the worrisome part is we see no progression towards a  reduction of losses,” said Steinhauer.

“The long-term efforts of the BIP’s annual survey are so important to monitoring honey bee colony losses and beekeeper management over time, and hopefully to identifying key practices that are protective for colonies,” said Williams. “Because of the close connection of honey bees to the environment, the survey’s long-term data may lend itself to insights into how changes in land-use and weather impact the beekeeping industry, too. These are really understudied areas at the moment.”

This year, to get a better understanding of different management practices that may lead to loss fluctuations, the BIP team delivered two versions of the survey to cater to different beekeepers. The two surveys found that backyard (managing 50 or fewer colonies) and sideliner (managing 51-500 colonies) beekeeping operations face both similar and distinct challenges to commercial beekeepers managing more than 500 colonies. While parasitic varroa mites continue to be a major issue for beekeepers regardless of operation size, queen management might be a factor that can lead to variation in seasonal colony losses.

“A colony needs a healthy, fully functioning queen before major pollination events to be productive,” said Williams. “A preliminary look into survey data reveals that commercial beekeepers almost always replace old queens with new ones during the summer, whereas only about half of backyard beekeepers do. Could this explain why commercial beekeepers lose fewer colonies in the subsequent winter than backyard beekeepers? Perhaps, but we need to dig deeper and possibly perform experiments to shed more light on this.”

While the survey suggests that beekeepers are remaining responsive to the current best management practices and health concerns of their colonies, the loss data shows little progress.

“We see in the survey signs that beekeepers are adjusting their practices over time,” said Steinhauer. “We also see that their perception of risk is changing. The level of acceptable loss, which was originally around 15% in earlier years of the survey, has crept up to 23% this year. So that tells us beekeepers are thinking about those factors that affect honey bee health more actively. We also see some beneficial changes in agricultural practices that could affect honey bee health, like changes in spray recommendations. But there are still a lot of issues that are left unaddressed. It seems we’re running to stand still because beekeepers are changing their practices, and yet we still don’t see a clear improvement in their loss rates.”

BIP stresses that the lack of improvement in losses is a clear call for more attention and efforts to be paid on finding solutions, especially concerning varroa mites. The BIP annual loss survey continues to be an important part of documenting the data necessary to drive future research, best management practice recommendations, and support for honey bee health.

“We hope to continue BIP’s survey effort to record colony losses experienced by U.S. beekeepers and explore beekeepers’ management practices,” said Steinhauer. “We have a general idea of what practices are associated with higher success, but the devil is in the details, and we need to understand why the implementation of some practices are more successful in some cases than others. Of course beekeepers also need the support of the public and political sectors. We need to recreate environments that are conducive to healthy bees, and that will benefit both honey bees and native bees or other wild pollinators.” 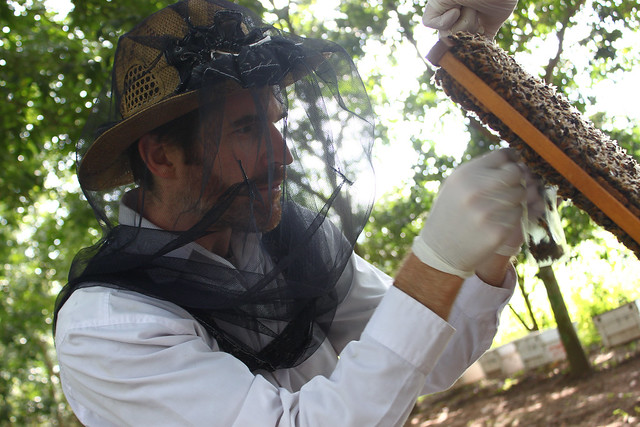 Geoff Williams, Auburn assistant professor of entomology and apiology, inspects brood cells, or “mother cells,” in a bee colony. Beekeepers across the United States lost 45.5% of their managed honey bee colonies from April 2020 to April 2021, according to preliminary results of the 15th annual nationwide survey conducted by the nonprofit Bee Informed Partnership. 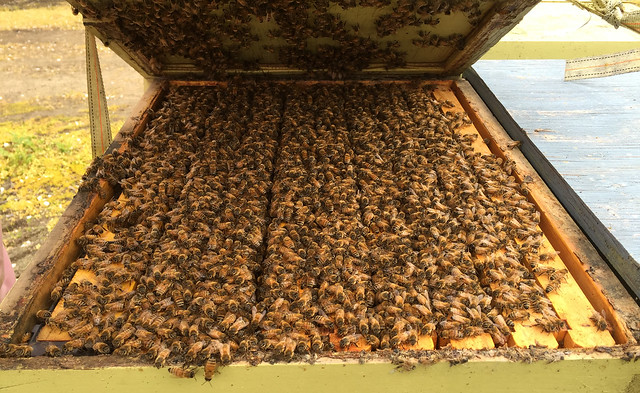 The honey bee is one of the most important pollinator species to food security and ecosystems worldwide.