The last construction beam for the Tony and Libba Rane Culinary Science Center at Auburn University was raised Friday, marking a seminal point in the building of the world-class facility.

Alabama Gov. Kay Ivey attended the event, noting that the structure will not only benefit tourism and hospitality industries in Alabama, but “definitely put us on the map worldwide.”

“The bottom line is this center will train future generations in the hospitality industry in first-class style,” she added. “It will be a credit to future generations and give lots of young folks opportunities that they never would have had.”

Susan Hubbard, dean of the College of Human Sciences, said the Rane Center has been described as “unique,” “remarkable” and “unlike any place in the world.” She noted that the impact of a culinary science center unlike any other, anywhere, will have “positive ripple effects well beyond Auburn.”

As the final beam—1,500 pounds of American-made steel—was hoisted more than 130 feet above the invited guests, Allen Harris, chief executive officer of Bailey-Harris Construction, the construction firm behind the Rane Center, called it “the most unique and most admired culinary center on planet Earth.”

The phrase, “topping off,” is used to denote when the last beam is placed atop a structure during its construction.

The 142,000-square-foot Rane Center, slated to open in fall 2022, will house Auburn University’s hospitality management program in the College of Human Sciences. It will provide students interested in hospitality and culinary science careers with hands-on learning experiences in a luxury boutique hotel (The Laurel) and a teaching restaurant (1856), as well as a range of classrooms and cutting-edge demonstration and food production laboratories. It is a first-of-its-kind building at Auburn in that it blends a major academic component with revenue generating elements.

Auburn University is home to Alabama’s only professionally accredited hospitality program. The new center will be a draw for students currently in top culinary programs in high schools in Alabama and across the nation. It will also become a destination for alumni and new guests alike who enjoy food and beverage tourism.

The dream and vision for a culinary science center at Auburn started more than a decade ago when then-Dean June Henton tasked Martin O’Neill, head of the college’s Department of Nutrition, Dietetics and Hospitality Management, and Hans van der Reijden, managing director of The Hotel at Auburn University and Dixon Conference Center, to visit globally recognized programs and facilities to benchmark the center’s development.

Hubbard said such a project could not have become a reality without a lead donor. In 2017, James W. “Jimmy” Rane became that person for the college, committing $12 million on behalf of the Rane family. The Board of Trustees later approved naming the facility in honor of Rane’s parents, Tony and Libba Rane.

Jimmy Rane, a 1968 Auburn alumnus, longtime Auburn trustee and chairman, president and chief executive officer of Great Southern Wood Preserving, said he had considered for years how he could give back to Auburn for all it had done for him.

“I am the first member of my family to get a college degree,” he said. “What I am able to do today is because of Auburn.

“I just want to thank Auburn. This is a day for Auburn. I owe so much to this institution, to my teachers, to the administrators who helped me. I try to remember them and honor them for what a difference they made in my life. Auburn is a wonderful place, and I will never ever be able to repay Auburn for the great things that they have contributed to me.”

After discussions with Gogue and fellow trustee Raymond J. Harbert, Rane said he appreciated the idea of supporting a culinary science center unlike any other.

Rane’s interest in the project only grew when he realized his longtime friend Van der Reijden had such an overwhelming passion and enthusiasm to see a vision become a reality at Auburn, it reminded Rane of his own father. Tony Rane was the son of Italian immigrants and became a successful entrepreneur with several restaurants, retail stores and hotels.

“I remember how passionate my dad was about the quality that he wanted to produce in his restaurants,” said Rane. “And if it inspires just one young person to go on and do some of the great things that he did, it’ll all be worth it. But I have a feeling it will inspire more than just one.”

The younger Rane said he became certain this was the right way to give back to Auburn after he talked with his wife, Angela, who was in full support of the idea.

As if he needed more encouragement, he said he was told there were more than 70 culinary science centers around the world, but none of them had every facet under one roof.

“That got my juices flowing,” Rane said. “You know at Auburn we do like to be number one.”

The Rane Center is deliberately located at the intersection of South College Street and Thach Avenue, where campus and community meet.

O’Neill has had dreams of enhancing Auburn’s hospitality program since he came to campus in 1999. He knew then that improvements would not only benefit students, but the Auburn community and beyond.

“We want this to be a very interactive site and facility for the community, but we also see it as an engine for workforce development for the state,” he said. “Tourism remains a multibillion dollar industry for the state. I know we've all experienced a hiccup over the course of the last year, but we’re hoping we’re going to be at the forefront of that engine moving forward, supplying and meeting the needs of the industry.” 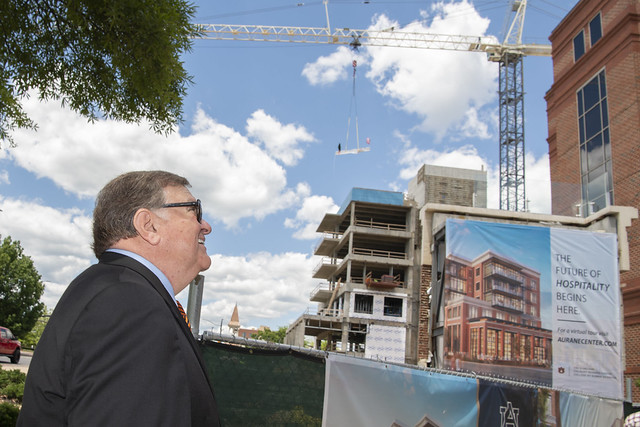 James W. “Jimmy” Rane watches the final construction beam be hoisted to the top of the Tony and Libba Rane Culinary Science Center at Auburn University on Friday, May 14. The Rane family made the lead gift to the construction of the world-class facility, which the Auburn Board of Trustees agreed to name in honor of Rane’s parents, Tony and Libba Rane. Jimmy Rane was the first person in his family to earn a college degree. 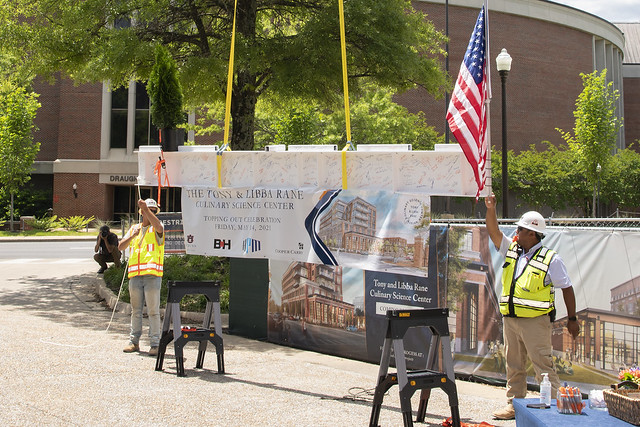 Employees of Bailey-Harris Construction make sure the last construction beam is hoisted to the top of the Tony and Libba Rane Culinary Science Center on Friday, May 14. The beam carried signatures of event attendees, a ceremonial plant and the American flag 130 feet into the air. 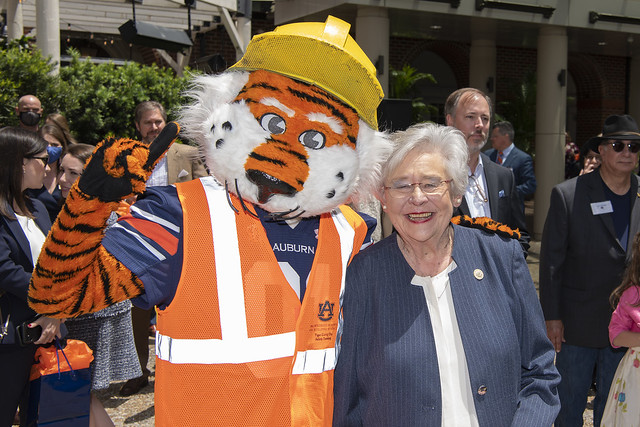 Alabama Gov. Kay Ivey, right, attended the topping off celebration for the Tony and Libba Rane Culinary Science Center at Auburn University on Friday, May 14. She ran into Auburn’s beloved mascot, Aubie, at the event. 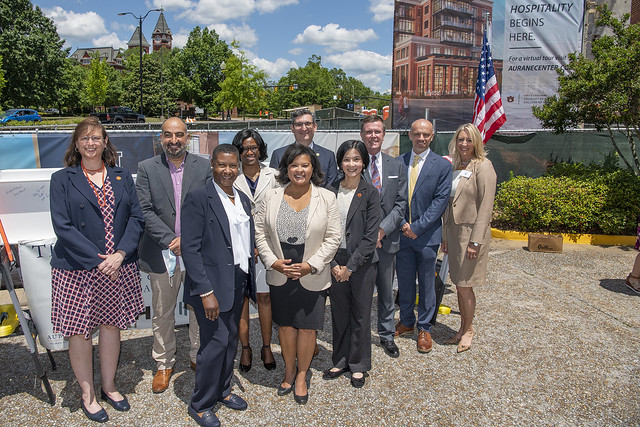 Faculty and staff in Auburn University’s hospitality management program attended the topping off celebration event on Friday, May 14, as the Tony and Libba Rane Culinary Science Center will house the program when the facility opens in fall 2022. 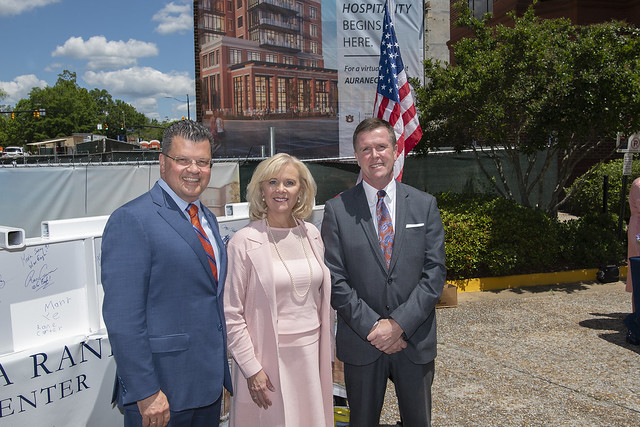 Hans van der Reijden, managing director of The Hotel at Auburn University and Dixon Conference Center; Susan Hubbard, dean of the College of Human Sciences; and Martin O’Neill, head of the college’s Department of Nutrition, Dietetics and Hospitality Management, were pleased to celebrate the topping off of the Tony and Libba Rane Culinary Science Center on Friday, May 14. The last construction beam is located behind them. 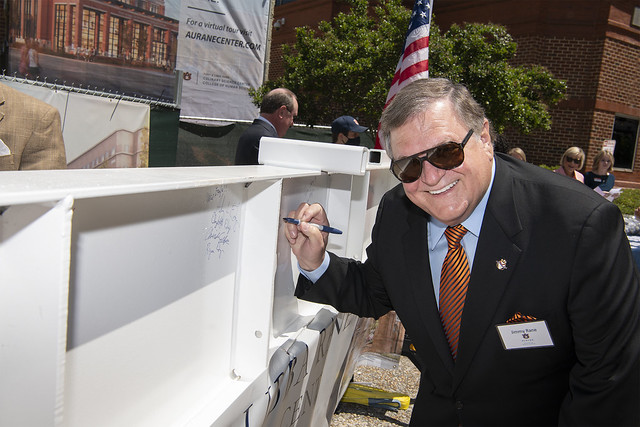 James W. “Jimmy” Rane gladly signed the final construction beam before it was hoisted to the top of the Tony and Libba Rane Culinary Science Center at Auburn University on Friday, May 14. The Rane family made the lead gift to the construction of the world-class facility, which the Auburn Board of Trustees agreed to name in honor of Rane’s parents, Tony and Libba Rane. Jimmy Rane was the first person in his family to earn a college degree.