The news is often filled with stories about wildfires and the widespread damage caused when they burn out of control. A combustion expert in Auburn University’s Department of Aerospace Engineering in the Samuel Ginn College of Engineering is studying how the absence of managed control burns could be a significant contributor to this problem.

Assistant Professor David Scarborough and his graduate research assistant, Daniel Stubbs, are conducting studies on the characteristics of wildfire burning and the ways that naturally occurring fuels—largely ground litter vegetation—interact. Their objectives include, among other things, collecting data to support the use of prescribed—or controlled—burning as a means for mitigating the devastation caused by wildland fires. John Kush, a research fellow and forest ecology expert in the School of Forestry and Wildlife Sciences, has also contributed to the ongoing project.

“We are seeking to learn more about how wildfires and the fuels that feed them interact,” Scarborough said. “Forestry researchers are not usually focused on combustion research, so we joined with forestry in this study. We are trying to use our expertise in combustion and fluid dynamics to serve and contribute to a large, important state and regional industry. This project gives us a platform to conduct relevant research and compile valuable data.”

Using their laboratory apparatus—dubbed the Wildland Fire Integrated Research Experiment, or WildFIRE—Scarborough and his team simulate wildland fires under a variety of conditions and fuel compositions. WildFIRE is a laboratory-scale experiment that incorporates high-speed, high-resolution optical diagnostics along with more traditional diagnostics, such as fuel mass consumption, temperature and emissions measurements, to investigate the effects of fuel composition and moisture content, terrain slope and wind speed on the combustion of wildland fuels. WildFIRE is used to obtain important data on such factors as flame height, flame propagation speed, fuel consumption rate, harmful emissions and residual fuel mass to compare with and improve modeling tools that are used to simulate wildfires.

“Our primary focus is on combustion of loblolly pine needles, because this is widespread in Southeastern forests,” Scarborough said. “We are trying to better understand how pine needles burn under a variety of natural conditions. We also employ optical diagnostics to observe flames to visually measure various flame characteristics. By studying these situations under controlled conditions, we are able to gather very accurate data and make predictions about how a wildfire will react under specific situations and conditions.”

Their study has been underway for a number of years. It began around the time of the huge Smoky Mountains wildfire in the Gatlinburg, Tennessee, area in 2016. More recent wildfires in the western United States have spawned further interest within the forestry and fire safety communities, according to Scarborough.

Scarborough noted the economic impact of the forestry industry as the catalyst behind this research: “Forestry is a major part of the Alabama, United States and world economies.”

According to the Alabama Forestry Commission, Alabama forests generate more than $21 billion in revenue annually and provide 122,000 jobs. There are 23 million acres of timberland in Alabama, accounting for 69 percent of the total land area in the state.

Alabama has the third most timberland acreage in the 48 contiguous states, behind only Georgia and Oregon. Wildfire poses significant risks to wildlife, forests, human life and property, not to mention the potential environmental impact in both smoke and harmful, gaseous pollutants, he explained.

“Wildfire was once a common, frequently occurring, natural disturbance initiated most commonly by lightning in numerous ecologically important ecosystems,” Scarborough added. “However, across much of the modern landscape, the fire process has been significantly altered and sometimes eliminated through human intervention. In the absence of fire, leaves, evergreen needles and small sticks accumulate on the forest floor over the period of many years. Furthermore, many invasive woody species such as wax myrtle and yaupon holly grow uncontrolled under the tree canopy.

“Therefore, fire, when it does finally occur, as it most assuredly will, often rages out of control, propagating rapidly with high-heat intensity and long flames as it consumes many years’ worth of accumulated fuel and woody plants.”

Foresters have long known that a practice known as prescribed burning is a valuable and effective fire control application, according to Scarborough, but this practice is not applied as frequently for a number of reasons.

“Prescribed, or controlled, burning is a type of intervention that seeks to provide the benefits of natural wildland fires while minimizing the potential threats to property and other anthropogenic concerns,” Scarborough said. “These prescribed burns, when repeated at frequent intervals, serve to consume the fuel materials on the forest floor while managing invasive species. This, in turn, reduces the amount of potential fuels accumulated on the forest floor.”

Although prescribed fire reduces the risk of damaging wildfire and promotes forest restoration and wildlife habitat, significant regulatory restrictions and public perception pose hurdles to the use of prescribed fire. But better data could help change that.

“The primary reason is that data on wildfire and prescribed burns are difficult to obtain due to the cost and risks posed from fire on the scale at which wildland fires occur,” Scarborough said. “On the opposite end of this spectrum, small-scale laboratory studies fail to include many relevant factors.”

This is where the work of Scarborough and his team is making a valuable contribution. The Wildland Fire Integrated Research Experiment is a wildland fire combustion research facility capable of simulating burn areas up to several square meters, located at Auburn University’s Combustion Physics Laboratory, or AUCPLAB.

“WildFIRE is a unique facility among universities in that it is an intermediate-scale facility bridging the gap between traditional university bench-scale experiments, which are typically within the centimeter scale, and full-scale research fires conducted by governmental laboratories,” Scarborough said.

Burn experiments are conducted by simulating a variety of environmental conditions and incorporating different types of fuel source combinations, he explained.

“Our research provides an intermediate-scale facility designed to obtain data on the combustion and emissions properties of wildland fuels under field-relevant conditions that can be used to validate computer simulations of wildland fires and compare with field wildfire and controlled burn observations,” Scarborough said.

Scarborough noted the ultimate goal of the lab’s research is to develop optical diagnostics that are useful in the study of wildland fires in the field and to provide data that help to validate existing wildfire data on combustion, controlled burning and other characteristics surrounding the nature of wildfires.

Also, their hope is that, by better understanding how wildfires interact with the fuel sources and environmental conditions feeding them, they can help in the development of better ways to mitigate the damage caused by out-of-control wildfires by providing a deeper understanding about the combustion properties of fire and fuels. 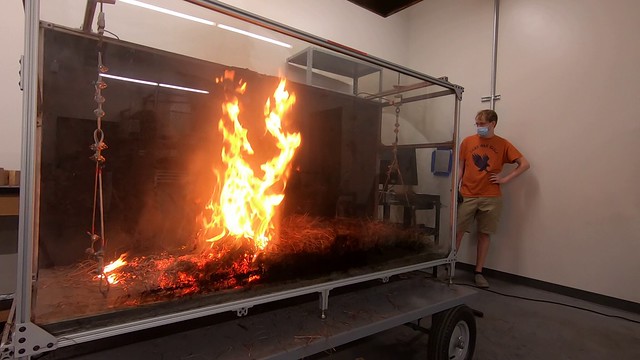