Donovan Evins is not your typical college freshman.

The 18-year-old Meridian, Mississippi, native arrived at Auburn University last fall full of hope, promise and big goals, and he has hit the ground running on the Plains. Evins, a medical laboratory science major, has become involved in EMERGE at Auburn—a student leadership group committed to helping Auburn students develop leadership skills they can use on campus, in their communities and eventually in their chosen career fields. In addition, he is a regular at the Office of Student Involvement and serves on the Black Student Union, or BSU, Freshman Committee.

Evins hasn’t let the COVID-19 pandemic keep him from immersing himself in college life.

“I would say I’ve had a pretty great experience here at Auburn, even though COVID has slowed some things down,” said Evins, who was valedictorian of Greenville High School in Greenville, Alabama, last year. “I know Auburn has a lot to offer and give back to me as a student. I know we’re rounding the corner soon and I will get to fully experience college like I should.”

“It feels more of a family now since I know so many people through the Black Student Union, and it just helps me be able to relate and be comfortable here at Auburn,” said Evins, who was student body vice president and named “Mr. Greenville High School” his senior year.

He wants to contribute to the university’s diversity efforts by encouraging his peers to feel welcomed through consistent interaction and fellowship.

“I really want to make that push for more black men on campus,” said Evins, BSU’s liaison for Auburn’s Student Government Association, or SGA. “I just want them to know there are opportunities to get involved and be active.”

They are allowing him to pursue his dreams of becoming a traveling medical lab scientist, a career opportunity Evins feels will give him the opportunity to see the country and perhaps the world.

“I heard that medical lab science could be traveling science, like traveling nurses, and you can get paid stipends like them to see the world at the same time,” Evins said. “So, I’m interested in that and moving around the U.S. and seeing certain spots to see how health care is affecting certain people.”

Evins developed a strong work ethic from his mother, DeShannon Bogan, an Auburn graduate who works as a housing specialist for the Montgomery Housing Authority. He also was greatly influenced by the perspective and direction of his grandmother, Lillie Bogan, who passed away in February. She inspired his desire to help others.

“She was always a very helpful person, and she just kind of instilled that inside of me to help people,” Evins said of his grandmother. “She said to help people when you can, and if you can’t, then give your encouragement and try to keep others from being doubtful. Just keep their head up and even when you can’t, try to instill that in other people. If everyone had that attitude, the world would be a better place.”

“The ability to help people and bring a smile to their face brightens my day, and I feel as if that could be my passion in life once I get older,” Evins said.

Growing up with a mother and uncle who were Auburn graduates, Evins routinely attended football games and visited campus. His college decision came down to Auburn and the University of Southern Mississippi in his birth state, and Evins decided the Plains were the best place for him to take the next step.

“The Auburn traditions and just the atmosphere here really drew me in,” he said. “I’m so used to Auburn, I know it’s good and is full of good people with good intentions. I knew you can’t go wrong with Auburn, and so I came here.”

He fondly remembers receiving his acceptance letter in the mail.

“It took a long time for me to get accepted to Auburn, and if I didn’t make it into Auburn, man I might have cried,” Evins said. “But the day it did come in, I was in the classroom and one of my friends who had applied as well—there was actually a group of us waiting for our acceptance letters—his mom texted him and sent a picture saying ‘it came,’ and so I was eager to get home.

“I got home and checked the mail, and my letter was there. So, I called my mom and we celebrated, and it was very nice.”

His acceptance was extra special, given his family’s deep ties to the university and Evins’ fond memories of visiting Auburn.

“My mom and I were deeply involved in football, and it was almost an every year thing going to games,” he said. “We always tried to make it something memorable each year, at least getting a pom-pom or taking a picture on the field. Once I became about 15, I started getting involved in Auburn basketball, and I really wanted to go to a game. But I never got a chance to go to a game until I got here at Auburn, so that was a big milestone for me.”

Getting a well-rounded college experience

Evins was supremely focused on academics in high school—even to the detriment of his social life—and he wants to make sure his Auburn experience is as well-rounded as possible.

“In high school, I kind of discouraged myself because I was all work,” Evins said. “It did pay off, but I was kind of unhappy because I didn’t get to make memories or have as much fun as other kids. So, I was like, ‘When I get to college, I’m going to put myself out there, make a name for myself, get out there and get involved.’ That’s what I’m doing so far, and I’m really enjoying it.”

Now that he’s been able to become an involved member of the student body, Evins has even bigger plans for his sophomore year and beyond. He has been named an EMERGE team leader for 2021-22 and has plans to become even more involved with the SGA, as well as the Office of Inclusion and Diversity, or OID.

“I just try to encourage as many people as I can, because you can come here and make the most of your time,” he said. “I’m doing great, and I’m trying to make my friends want to come here, too. It’s truly a great time, and you can’t go wrong with Auburn.”

Evins also wants to give back by serving as an ambassador for the College of Sciences and Mathematics, or COSAM.

“I really love my college, and they make me feel like part of the Auburn Family,” said Evins, who recently was named morale team captain for AU Dance Marathon. “I really just want to stay a part of COSAM and to be able to represent COSAM to other students, especially incoming students, because it would really be like me giving back to the college for welcoming me with open arms.

“Other than that, I just want to make good friends and network here at Auburn so when I get out into the real world, I will have people to reach out to.”

The feeling from COSAM is mutual. Julian Oliver, program coordinator for COSAM’s Office of Inclusion, Equity and Diversity, has been a mentor to Evins.

“Ever since I first interacted with Donovan Evins in my annual STEM Summer Bridge Program, I could tell that he was a bright young man with even a brighter future ahead of him,” Oliver said. “He was consistently participatory in our program activities, he built community relatively quickly with his fellow peers, and he took his role as a COSAM OIED Scholar very seriously. One characteristic that sets him apart from most is his strong involvement in campus life, while also maintaining a high academic standing.

“For most COSAM students, this is understandably somewhat difficult to do. The rigorous science and math classes leave some of the smartest students scratching their heads at times, but for Donovan, he made it look effortless. I know that by the time he graduates from Auburn University, he will have achieved a multitude of other accolades that exhibit his belief in hard work.”

Even though he’s nearly a year into his Auburn career, Evins still has a surreal feeling about being a student on the Plains.

“It still feels unreal because years ago, I was looking up at older kids at Auburn, and now I’m actually here at college participating and going to games and things like that,” Evins said. “It feels like I’m fulfilling what I’m supposed to do, because honestly now that I look back at it, I don’t see any other place I could be besides Auburn. This is home to me.” 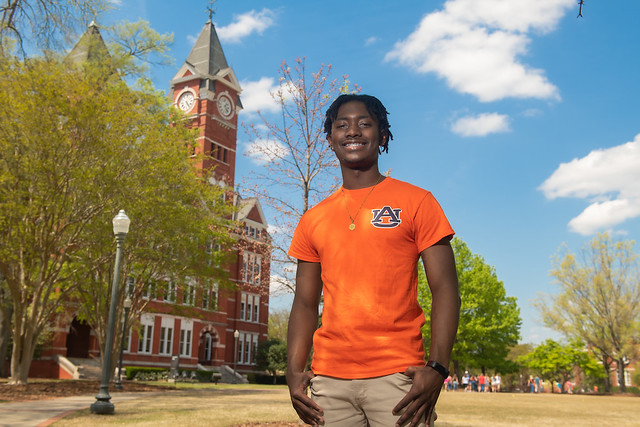 Auburn freshman Donovan Evins already has immersed himself in college life, joining a number of student groups and setting the stage for a college career full of promise. The medical laboratory science major has big plans for his days on the Plains. 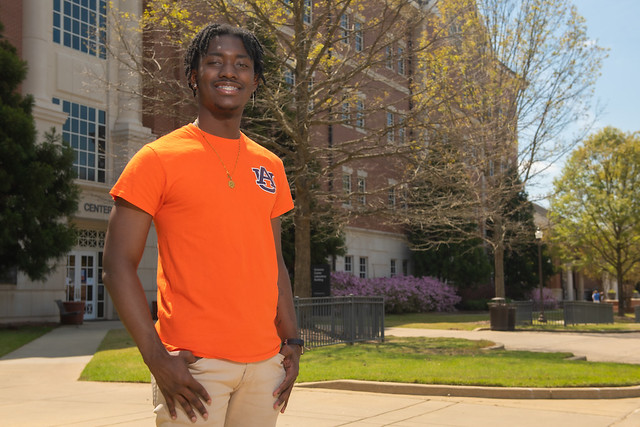 Donovan Evins is majoring in medical laboratory science and hopes to one day help others by becoming a traveling lab scientist. 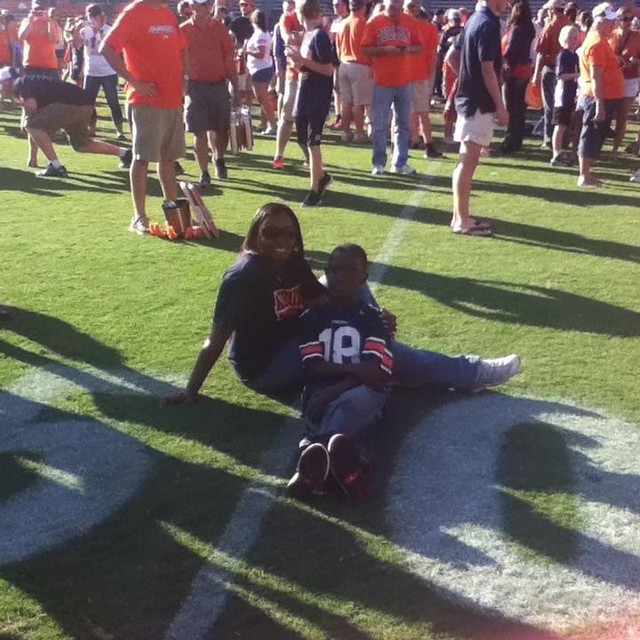 Donovan Evins is a second-generation Auburn student who grew up going to games with his mother, Auburn grad DeShannon Bogan. Here, they are enjoying some quality time on the field at Jordan-Hare Stadium in 2013, when Evins was 11 years old. 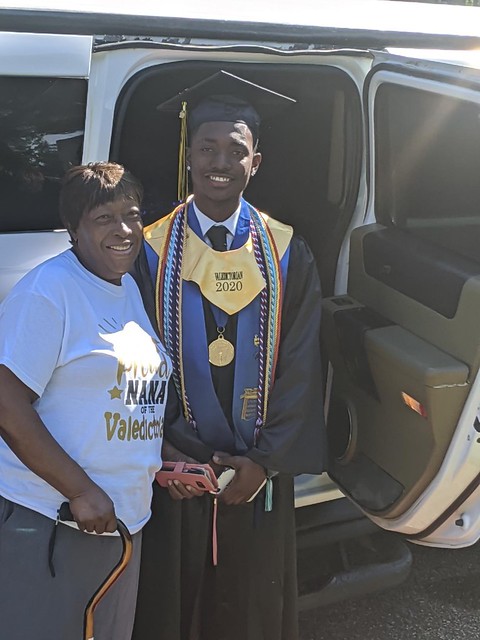 One of Donovan Evins' most important role models was his grandmother, Lillie Bogan, who got to see him become valedictorian of Greenville High School in Greenville, Alabama, in 2020 before passing away in February of this year. 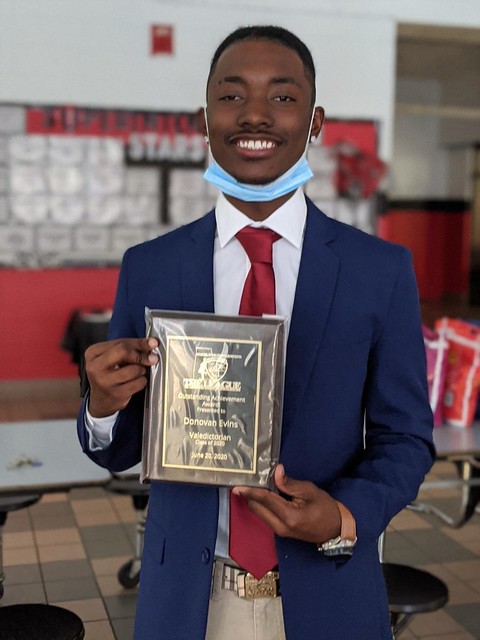