A deanship is an endowed fund used at the discretion of the current dean to direct funds toward a school’s major goals without undercutting budgetary priorities.

“The Emmett F. Thompson Deanship will benefit the School of Forestry and Wildlife Sciences by elevating the school’s status, positioning it to become a college, launching new initiatives, continuing a culture of excellence and helping to recruit and retain highly qualified deans in the future,” said Dean Janaki Alavalapati.

The deanship was established by Thompson’s children, Chuck, Meri and Juli, and received a leadership gift from the Solon and Martha Dixon Foundation, in addition to gifts from a host of other friends of the school. Funding for the deanship is currently at 75 percent, with a projected completion by the end of 2021, said school Director of Development Heather Crozier.

Thompson, who retired in 1998, began his Auburn career in 1977 as head of the Department of Forestry, which was then part of the School of Agriculture. In 1984, he became the School of Forestry’s first dean.

“During his 21-year tenure, he was a pioneer,” Crozier said.

Among Thompson’s many accomplishments, he established the School of Forestry as a stand-alone entity, separate from the College of Agriculture. He also led the effort to create the Solon Dixon Forestry Education Center, a one-of-a-kind facility in Andalusia, Alabama, and he provided the foundational work for the creation of the School of Forestry and Wildlife Sciences’ state-of-the-art facility, which was completed in 2005.

In addition, Thompson established a forestry engineering program, created the Forestry in the Private Sector class and worked with other departments in the university to round out and improve educational opportunities for students. The latter effort came to fruition after his retirement, when Auburn’s wildlife program became part of the school.

“Dr. Thompson truly deserves to be honored with a deanship in his name,” Alavalapati said. “His achievements as dean of the School of Forestry have had a major impact on developing this school to become the outstanding research and educational institution that it is today.”

Thompson has continued to be a force in the school, he added.

“Since his retirement, he has served on our campaign committee, maintained a strong relationship with our many benefactors and industry contacts and makes himself available for any school event that takes place.”

More information about giving to Auburn’s School of Forestry and Wildlife Sciences is available at sfws.auburn.edu/giving or by contacting Crozier at vannhea@auburn.edu. 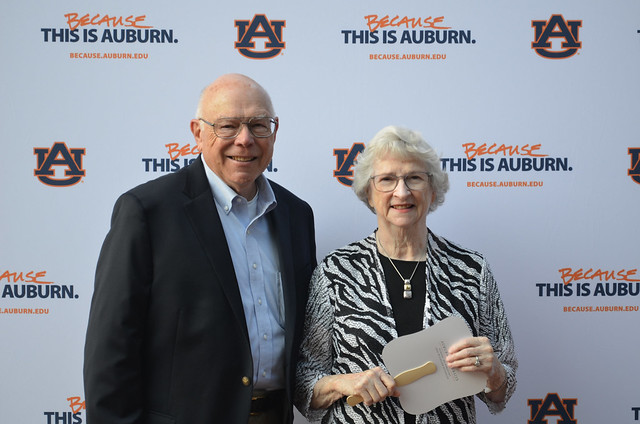