Prominently situated alongside one of the university’s main corridors, the Legacy Plaza’s nine markers represent each of the historically African American Greek letter organizations, also known as the Divine Nine. The plaza’s granite pillars are inscribed with each organization’s Greek letters and crest, along with chapter names for the eight that have been established at Auburn. A 10th marker provides information on the plaza’s purpose and significance and recognizes project donors.

In addition to serving as an event and gathering space for Black Greek students and alumni, the Legacy Plaza is a testament to the university’s charge to create a more inclusive environment and the student body’s desire to ensure their peers are equally represented.

“When I started my presidency in May, I said that I would place considerable emphasis on fostering an inclusive learning and work environment where all students, faculty and staff are able to undertake their research and educational pursuits while feeling welcomed, valued, respected and engaged,” President Christopher B. Roberts said. “The NPHC legacy plaza will be an enduring example that Auburn supports a diverse campus environment.”

Coinciding with the 50th charter anniversary of the first Black Greek organization at Auburn, today’s unveiling is the culmination of more than four years of planning and discussions among students who advocated for a permanent space and physical representation on campus of the National Pan-Hellenic Council, or NPHC, organizations. As conversations continued, more support was garnered, resulting in a formal initiation of the project in December 2018 by the Student Government Association, or SGA.

“The Legacy Plaza is a tangible reminder of the respect our students have for each other and of the priority they place on ensuring everyone feels like they belong here,” Senior Vice President for Student Affairs Bobby R. Woodard said. “Those are distinctly Auburn values that are instilled in our students, and they are among the many things that make this university such a special place.”

Auburn students also led the plaza’s fundraising efforts. In a show of solidarity with the NPHC, the Interfraternity Council, the Panhellenic Council and SGA made significant contributions to the construction of the Legacy Plaza. Thanks to widespread support across campus and beyond, the Legacy Plaza is one of the university’s most successful Tiger Giving Day projects, with 639 individual donors donating to the plaza in one day.

“The culture and significance of our chapters are engrained into the DNA at Auburn. It is beautiful to see the support we have gotten from all over campus,” NPHC President Dontavious Hill said. “We now officially have a place that represents our organizations and lets everyone know that we are here and doing great work at Auburn.”

Approved by the Auburn Board of Trustees in July 2020, the NPHC Legacy Plaza was a project called for by Auburn students and supported by various members of the Auburn Family.

“As a member of the Board of Trustees, I am so pleased to see this continued movement toward progress, acknowledging the National Pan-Hellenic Council’s contributions to Auburn through the years and honoring African American culture at Auburn,” said Trustee Tim Vines, a financial supporter of the plaza. “Today, we reaffirm our commitment to the needed embrace of a culture of inclusivity that will serve to further unite our strong Auburn Family. With this permanent recognition of those whose footprints in time have set the path before us, we demonstrate our devotion to continuing the long-term, deliberative work toward advancing and promoting opportunity and equity.

“As I look to the future and all that this dedication represents, I see a bright horizon of hope advancing our great university forward and furthering the potential that, together, united in purpose, we all can achieve.”

Auburn’s SGA Student Senate unanimously passed legislation in 2018 in support of the NPHC’s campaign to create a legacy plaza at Auburn after initial and continuing efforts from past SGA presidents Dane Block and Ada Ruth Huntley.

“This plaza is so much more than a group of plaques or plots that showcase nine Auburn Greek chapters,” said Madison Riggins, 2019 Auburn NPHC president and financial benefactor to the project. “This plaza serves to carry out the Auburn Creed. This plaza serves to restore, retain and recruit the Auburn Family that is sometimes overlooked or forgotten. This plaza will be a gathering place for all as we continue to educate and build.

“And most importantly, this plaza is a monument to just how much we as both a campus and a family have grown. I challenge you to allow this plaza to be a catalyst for the change we wish to see on campus. May it be evidence that no dream is too big and proof that we as a community are better for embracing our differences, as well as our commonalities.” 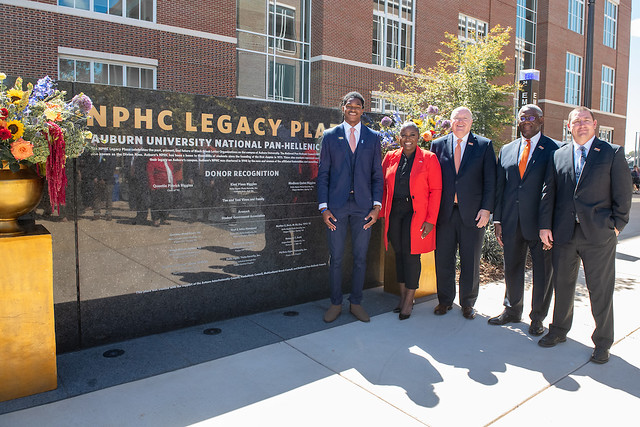 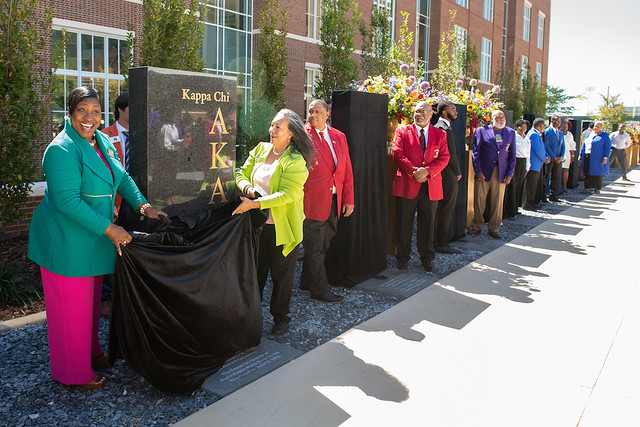 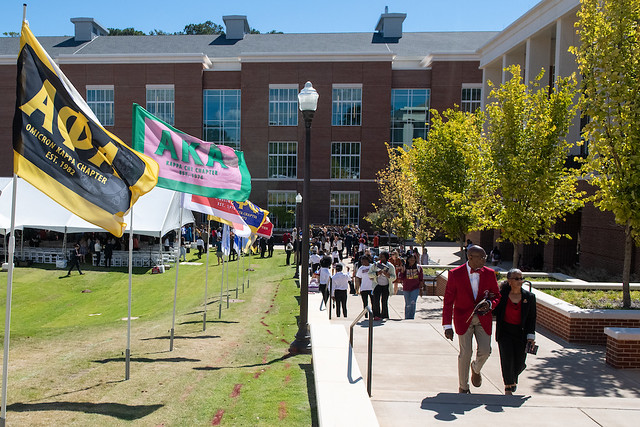 Auburn University's NPHC Legacy Plaza is prominently situated alongside one of the campus' main corridors. 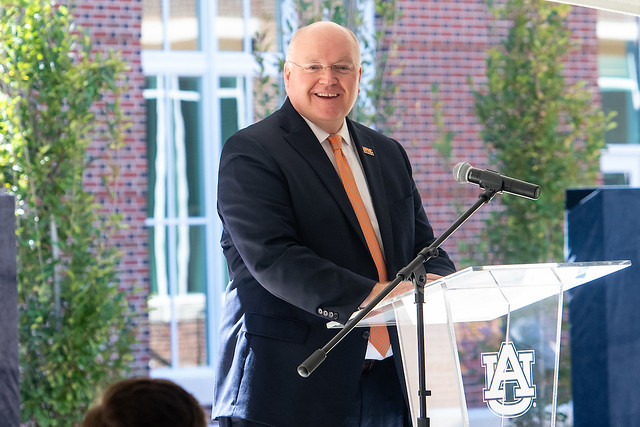 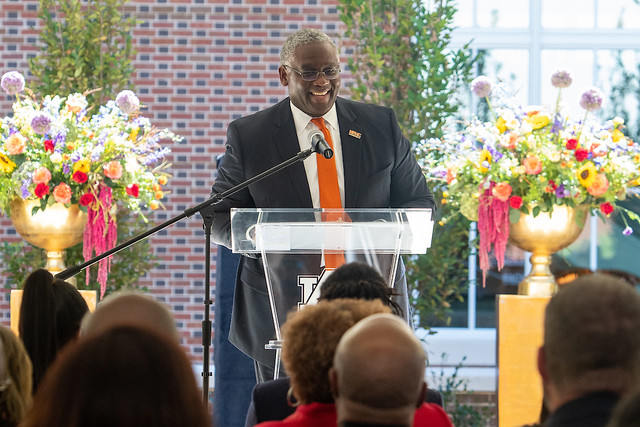 The NPHC Legacy Plaza came to fruition thanks to the support of hundreds of donors, including Auburn Trustee Tim Vines, who spoke about the university's commitment to inclusivity, opportunity and equity. 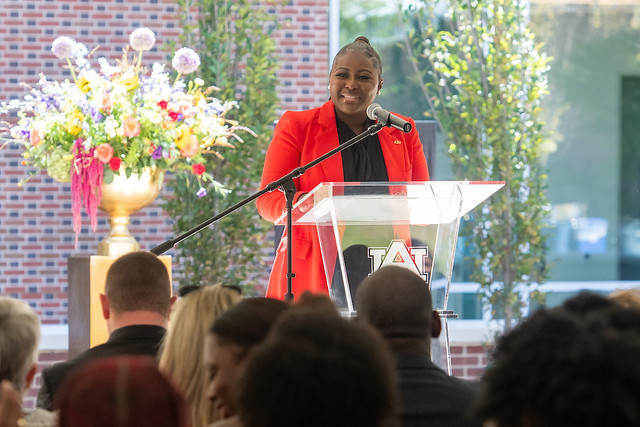 Madison Riggins, Auburn's 2019 NPHC president and a benefactor of the NPHC Legacy Plaza, gave an impassioned speech at the unveiling ceremony on the university's campus on Friday, Sept. 30. 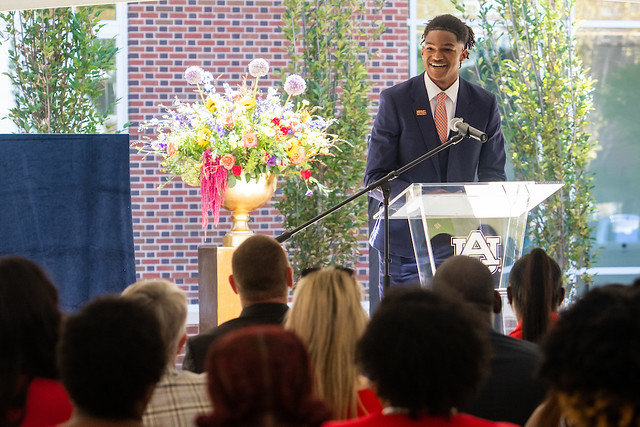 Dontavious Hill, Auburn University's current NPHC president and a member of the track-and-field team, spoke about what the Legacy Plaza meant to him and his fellow students. 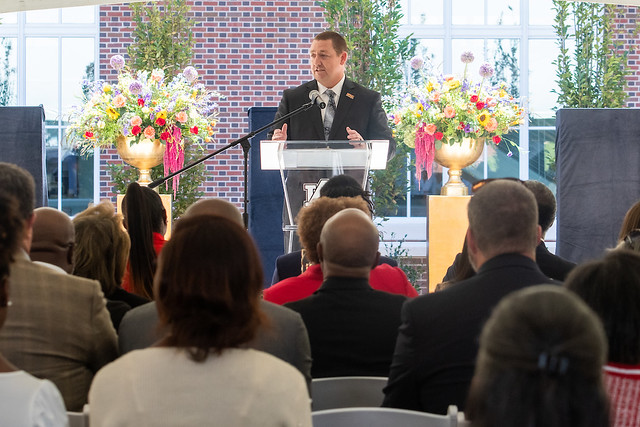