Fifteen-year-old Threadgill is recognized for acting heroically when a fire engulfed his family’s home in 2020. Only 13 years old at the time, he ran through the fire to save his four younger siblings who were separated by the flames in different rooms of the home. Because of his brave action, he and his family were safely out of the home by the time firefighters arrived.

“I didn’t think, I was just acting,” Threadgill said.

Threadgill, who enjoys math and science and dreams of one day being a doctor, chose to attend ACT Bootcamp with the scholarship. The weeklong camp provides an in-depth review of the ACT exam and introduces students to the admissions process, career services and student involvement opportunities at Auburn University.

Authored by Sam Hendrix, “Auburn: A History in Street Names” tells a comprehensive history of the City of Auburn through a look at the street names. Hendrix spent most of his career with the university as a public relations and development professional.

Proceeds from book sales fund an endowment at the university to provide academic camp scholarships for Auburn Youth Programs. The “camperships,” which cover costs of registration, on-campus lodging and meals, provide the opportunity for local youth to attend weeklong academic summer camps at the university.

Each camp scholarship is named for the remarkable individuals whose stories are told throughout the book. Gatsy Rice, for whom the inaugural scholarship is named, came to Auburn in the 1840s as a servant in a local household. Though born into slavery, Rice had an entrepreneurial spirit that allowed her to climb the economic scale.

After the war, she prospered as an independent seamstress—mending uniforms of East Alabama Male College cadets and others in town—and running a boarding house. She eventually owned property in both downtown Auburn and Opelika.

The book made its debut in 2021 and sold out in 29 days. A second printing is now available for purchase in Auburn-area bookstores and online. For more information on the book, making a purchase or the Sam and Mary Ellen Hendrix Endowed Fund for Excellence in the Office of University Outreach, visit aub.ie/auburnstreetnames.

Auburn Youth Programs, a program area within the university’s Office of Professional and Continuing Education, is an extension of University Outreach that sponsors and executes a variety of summer programs designed to educate and inspire youth. To learn more about Auburn Youth Programs, visit auburn.edu/summercamps. 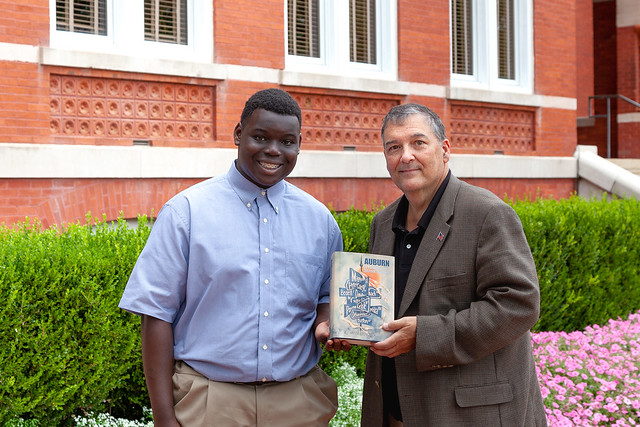 Kounte Threadgill is the inaugural recipient of an Auburn University “campership” funded by proceeds from the book, “Auburn: A History in Street Names,” written by Sam Hendrix. 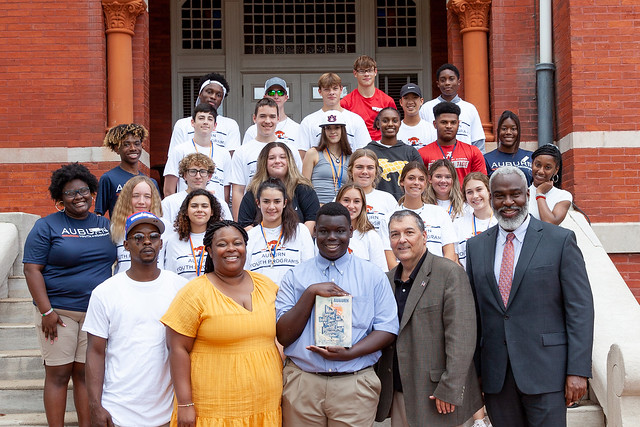 Kounte Threadgill is the inaugural recipient of an Auburn University “campership” funded by proceeds from the book, “Auburn: A History in Street Names,” written by Sam Hendrix. Pictured, front row from left, are Threadgill’s father, Kounte Threadgill Sr., and mother, Amber Threadgill; Threadgill; Hendrix; and Auburn Vice President for University Outreach and Associate Provost Royrickers Cook. On the following rows are members of the ACT Bootcamp.