Jake Haston’s name was read aloud from the back steps of Cater Hall on Feb. 4, announcing him as the next president of Auburn’s Student Government Association, or SGA. The declaration came at the conclusion of a voting campaign and set in motion his upcoming role as a key student leader for the 2022-23 school year.

“These organizations have allowed me to serve Auburn and connect with other students from all over the state and country, which is what Auburn is all about. SGA has allowed me to do both, and I am looking forward to serving the student body at Auburn.”

Haston, originally from Vestavia Hills, Alabama, is a senior majoring in journalism in the College of Liberal Arts with minors in German and business. He is also a member of the Honors College. His love for Auburn blossomed at a young age, but his love for serving the university began during his participation in student organizations that allowed him to develop his campaign and prepared him for his new role.

The journey to becoming SGA president began with Haston’s involvement in Freshman Forum, an organization of freshman students that aims to represent and serve the student body. He then joined the War Eagle Girls and Plainsmen, an organization whose members function as the official hosts and hostesses of the university. He later became a SGA at-large student senator.

Haston believes it is important to advocate for the enhancement of four key areas on campus: academics, student life, SGA and social advancement—his presidential campaign platform.

“Our SGA executive team has set out specific goals to advance each of these areas of the college experience. Along with these actionable goals, I believe it is the responsibility of the SGA president to advocate for students on a day-to-day basis to ensure the Auburn student experience offers every resource it can to students.”

Haston plans to do this by setting specific goals the executive team will work to accomplish during his term. He is also advocating for an increase of loanable technology for students and accessibility of academic advisors, which he believes will improve the academic experience for students.

”Jake is an outstanding student leader with a heart full of Auburn spirit,” said Senior Vice President of Student Affairs Bobby Woodard. “He is passionate about serving others, and I am confident he will represent his fellow students well as he works to make a lasting, positive impact on the Auburn student experience.”

After Auburn, Haston hopes to attend graduate school to earn a law degree and a master’s degree in business administration. He hopes to combine these skills with his love for sports, and he believes Auburn has given him the tools he needs to be successful.

Haston is excited to take on the responsibility of representing the student body and advancing student interests. He encourages students to make the most of their time at Auburn.

“Auburn has so much to offer,” said Haston. “I encourage all students to get involved, connect with others and serve Auburn.” 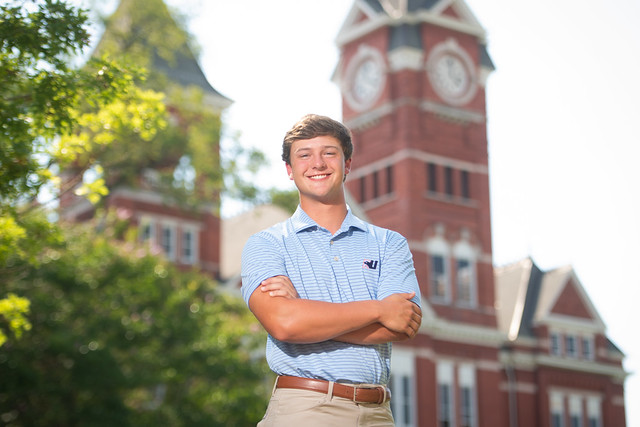 Jake Haston was recently elected SGA President and plans on advocating for the improvement of the Auburn student experience.