Sixty years ago, Dr. Barry Lee Booth (’63 pre-dentistry) finished his instruction at Auburn University and entered dental school at the University of Alabama, taking with him cherished memories of the Plains, yet leaving behind one special document.

At the time, students could enter medical and dental school after their junior year and qualify for an Auburn degree after their first year of professional school. Such was the case for Booth, and he transitioned to dental school never having received his diploma from Auburn—until now.

In a surprise ceremony on May 27, Booth was presented his Auburn diploma by Auburn President Christopher B. Roberts and Executive Vice President Lt. Gen. (ret.) Ron Burgess.

“I’ve bled burnt orange and blue since 1958—the diploma is appreciated,” said Booth. “I will see it every day and think of the moment I received it and the special people that were around me at the time. It was certainly an unexpected surprise.”

‘I believe in education’

Booth distinctly remembers who led him to attend Auburn. In 1958, after graduating from Aiken High School in South Carolina, he planned on enlisting in the U.S. Navy with a couple of classmates. However, Booth’s mother had a different plan in mind, indicating he needed to find a way to attend college.

Just like a few years earlier when Booth’s 10th-grade counselor in West Virginia advised him to be a sheet metal worker, his mother thought otherwise, stating that she would like for him to attend college and become either a physician, a dentist or a lawyer. She ultimately told him that her recommendation would be for him to attend dental school, to which he respectfully responded, “Yes ma’am.”

After his mother made arrangements for him to meet with a relative in Auburn, Booth packed a bag, and his mom drove him to the city limits of Aiken and said, “Here’s where you start.” Booth recalled, “Mom insisted I get out of that ’49 Ford, pointed down the Augusta highway and said, ‘Auburn, Alabama, is that way. Call me when you get there.’ Again, ‘Yes ma’am.’”

Booth stuck out his thumb, hitchhiked across Georgia and arrived in Auburn. His relative advised him to try to meet with James E. Foy, the dean of students, about getting into school. Dean Foy indicated that, if Booth had $55 for tuition, he could start classes at Auburn.

Booth stated that he didn’t have $55, but if Dean Foy would loan him the money for tuition, he would have him paid back by the end of the quarter. That day, not only was a deal made, but also a lifetime friendship between the two men. Booth described Dean Foy as “a friend to everyone, but most of all, he loved his students.” Booth and Dean Foy stayed in close touch until Foy’s passing in 2010, when Booth was honored to serve as a pallbearer.

‘I believe in work, hard work’

As a student at Auburn, Booth worked his entire time there, getting jobs on campus and around town, always securing a job that provided room and board. His jobs included working the front desk and driving the ambulance at Drake Student Infirmary, running a milk route every morning at the dairy, working for the agriculture department and library, selling popcorn and taking up tickets for Percy Vaughan at the War Eagle Theatre and as a dispatcher with the Auburn Police Department for Police Chief Clyde Ellis.

“For my milk route, I would leave the infirmary about 4 a.m. and jog past the fieldhouse to the football field,” said Booth. “There were no fences, so I would jog right down the middle of the field through both ‘H’ goalposts on to the dairy, where Mr. Wayne Jones and I would run our route to all the campus dorms. Our last stop would be the Auburn Grille and a visit with Mr. Gus every morning. At the time, the milk route job was the highest-paying student job on campus at 90 cents an hour, with three hours a day guaranteed, seven days a week.”

For Booth, saving that $2.70 a day began to add up. When he graduated from Auburn, he was debt-free, having paid off Dean Foy’s loan at the end of his first quarter. To be a debt-free Auburn graduate after some of the toughest times of his upbringing—he, his brothers and mother had to live in an abandoned World War II Army box car near Fort Bliss, Texas, through the winter of 1947-48 until they could get on their feet—was a humbling accomplishment and an opportunity he never took for granted.

‘I believe in my Country’

Booth graduated from dental school in 1966 and began active duty with the U.S. Navy at Marine Corps Recruit Depot San Diego. Following field medical school at Camp Pendleton, he was sent to Vietnam and assigned to the Naval Support Activity—Danang.

He volunteered to work in the McNamara Hearts and Minds program treating Vietnamese locals with the Marine Corps 1st and 3rd divisions and 5th Special Forces at Camp Kham Duc. He has returned to Vietnam on three occasions to assist in various other dental missions, and through those subsequent visits, has reunited with people he knew during the war.

“I have one pal that was a young kid during the war who is a retired police chief now, and we still communicate to this day,” said Booth. “Through the years, I’ve taken photographs of the same neighborhoods and the same people in their villages, so they’re able to see historical photos of themselves and their friends at a young age. On my visit in 2019, I was invited to a home and looked up to see my picture hanging on their wall from 1994.”

‘I believe in the human touch’

A pillar in the Spanish Fort, Alabama, community, Booth practiced dentistry there for 54 years before COVID-19 prompted his retirement. He was named the recipient of the Fuller Award in 2019, the most prestigious alumni honor awarded by the University of Alabama School of Dentistry Alumni Association.

Booth made available the land for the Alabama State Veterans Memorial Cemetery at Spanish Fort, which came to fruition and was dedicated in 2012. He has been named Veteran of the Year in both Fairhope and Mobile and other communities, was recognized at USS Alabama Battleship Memorial Park in 2020 with the commendation from Gov. Kay Ivey and presented with the highest civilian award the state can bestow—the Distinguished Service Medal—for his support of veterans.

Booth was key in orchestrating Honor Flight South Alabama, a program that took almost 1,000 World War II veterans to see their memorial in Washington, D.C. According to his friend and fellow COSAM alumnus, Dr. Michael O’Brien ’79, “There were a lot of veterans who would have not been able to go on the honor flights if it weren’t for Barry, and a large majority of them do not even know who made it possible.”

When asked what accomplishments have been most impactful in his life, Booth stated, “All efforts were meaningful. They were successful because of an entire team of people pulling the wagon in the same direction. Successful programs are never a singular effort.”

O’Brien pointed out that’s exactly how Booth has lived his life—by doing so much for so many yet taking the least credit.

“That quality might be the biggest asset of a good leader—it is to give praise to your team,” said O’Brien. “I saw him recently enable a young man to go to school, a total stranger he’d just met that day. You would have to search far and wide to find someone who Barry Booth hasn’t helped in some way.”

As a student at Auburn, Booth will tell you he did not live solely by the Auburn Creed, although he fully ascribes to it now. It’s been taped to his refrigerator for 50 years—right beside the picture of Dean Foy.

Now, with his diploma in hand, he has one more treasured keepsake to add to his collection of memories.
Link to Image 1 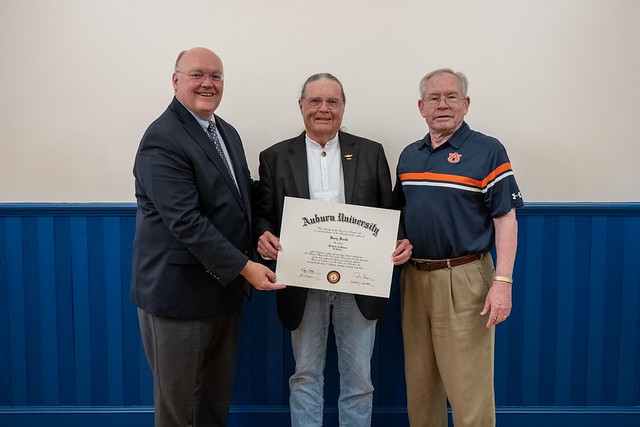 Dr. Barry Booth, center, was surprised by Auburn University President Christopher B. Roberts, left, and Executive Vice President Ron Burgess with the presentation of his undergraduate diploma. Booth graduated from Auburn in 1963, but went directly to dental school and never received his diploma, until May 27. (Photo by Phillip Coxwell) 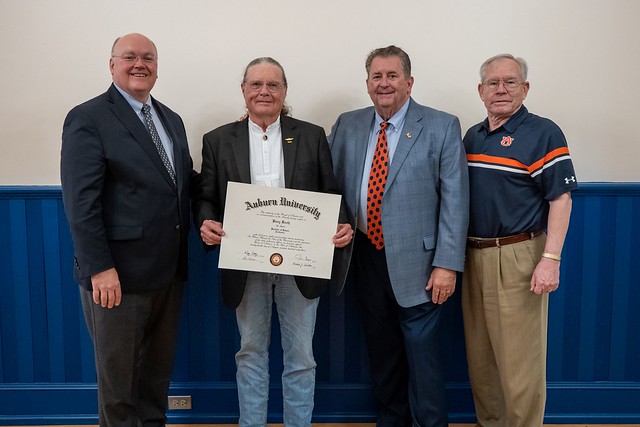 Dr. Michael O'Brien, second from right, joined forces with Auburn University President Christopher B. Roberts, left, and Executive Vice President Ron Burgess, right, to surprise Dr. Barry Booth with the presentation of his undergraduate diploma from 1963. Booth headed to dental school without the document following his days on the Plains until the surprise presentation on May 27. (Photo by Phillip Coxwell)