Clark—a 1996 music education graduate who serves as Amazon’s chief executive officer of Worldwide Consumer—urged graduates to break out, be daring and strive for greatness as they close one chapter of their lives and embark on their professional careers.

“You are forever a member of the Auburn Family,” Clark said. “We have your back, so go out, be bold, be brave, embrace your communities and build great things so that my boys can come listen to you when they graduate from this remarkable place. You’ve got everything you need to take on the world and win. Ever to conquer, never to yield!”

The proud alumnus told an emotional story about his arrival on the Plains and what it meant to him to become an Auburn Tiger.

“Two of my best friends from high school were freshmen here, and Auburn wasn’t on my list, but I had college visitation days, so I decided to come see my friends,” Clark said. “Once I figured out where Auburn was, I was on my way. I crested that hill on Wire Road, and campus was coming into view just as this hazy burnt orange sunset lit up this incredible cathedral we’re all in tonight.

“I will never forget that moment. I actually pulled over to the side of the road, got out of my car and just stared for a solid five minutes. My mother had passed the year before, and for whatever reason, I felt like she was there. Something about Auburn just felt like home.”

Clark talked about his time playing for the Auburn University Marching Band, performing with AU Singers and working as equipment manager for the Department of Music. He also mentioned one of the keys to success can be found in the Auburn Creed.

“It’s like the Auburn Creed says: It comes down to a commitment to ‘work, hard work,’ delivering on your promises and a commitment to service to others,” Clark said. “That’s really the main ingredient in the secret sauce, and I learned that at Auburn.”

He went on to advise graduates to surround themselves with people they like who are “brilliant” and to not be afraid to challenge themselves.

“Make sure your life partner is someone who challenges you and will always tell you the truth, no matter how much it hurts. They’ll make you better like no one else will.”

Clark also shared humorous personal accounts of his time on the Plains, including the accumulation of random items that might now be found in an Amazon warehouse.

“Shout out to those special graduates here who, like me, loved Auburn so deeply we stayed for a fifth year,” Clark said. “While I didn’t like 8 a.m. classes, I did love steamed nachos from Momma G’s, and I was a world-class collector of gameday T-shirts and Auburn merch. Now that I think about it, that was probably a key student skill I excelled at—acquiring large amounts of strange items—which may be why I am now the CEO of Amazon’s global consumer business.

“Now, I help deliver custom shirts and nachos to hundreds of millions of people at all hours of the day and night.”

Speaking of Amazon, Clark reflected on how his time there doing great things with extraordinary people has been a thrilling journey.

“I joined a community of like-minded builders, smart, driven people who saw the world as an endless stream of possibilities,” Clark said. “The environment at Amazon challenged me to be better and push further than I had ever thought possible. It’s invigorating to be surrounded by people like that.

“Hard problems are so much easier and way more fun when you partner with great people. I highly recommend it.”

Clark remarked that his career has been “nonlinear” and urged graduates to be daring, to take chances and to not be afraid to fail.

“If there is one thing I wished I knew when I was in your seat, it’s that almost everything you do in your 20s is reversible,” Clark said. “So please, take my word for it, go out there and make some mistakes. I mean, don’t worry your family too much, but please, go take that trip across the world, take that job that you might fear failing at, even start your own business.

“Trust me, you’ll live to tell the tale, and you might even see some very nonlinear results of your own.”

He praised the graduates’ perseverance through the COVID-19 pandemic and reveled at Auburn’s evolution in recent years.

“This class has experienced Auburn during more challenging times than I did,” he said. “But I encourage you to view this through the lens of opportunity versus doubt. After all, you’ve got Bruce Pearl and some great basketball teams, gymnastics, equestrian, baseball. I mean, you guys have really made this an everything school.

“So many good things are created through heat and pressure and times like we are in today spawn innovation, and opportunity for those with the courage and audacity to take on new challenges. These are traits I know are embedded in Auburn graduates.”

Friday night’s address also included the official conferral of more than 4,600 degrees by Auburn Board of Trustees member Clark Sahlie, as well as the group recognition of undergraduate students graduating with academic honors and an official welcome to the Auburn Alumni Association. It was also the final commencement for Auburn President Jay Gogue, who will retire and hand over the reins to Christopher B. Roberts on May 16.

“It’s a great day in the life of Auburn University,” said Gogue, who received a standing ovation from the crowd after being recognized for his service by Interim Provost Vini Nathan. “Today, you join a very special group of Auburn graduates. Since our beginnings in 1856, we have awarded 358,000 degrees, and today we will award 4,625 more that include professional degrees, doctoral degrees, master’s degrees and bachelor’s degrees. Very simply, congratulations and War Eagle!”

Friday night’s program was followed by individual colleges’ ceremonies at Neville Arena on Saturday, which ran from 8 a.m. to 8 p.m. A total of 4,625 graduates will participate in the commencement celebrations, which conclude on Monday with ceremonies at Neville Arena for the Harrison College of Pharmacy and College of Veterinary Medicine at 1 and 6 p.m., respectively.

Of those graduates, 748 were master’s, 110 were doctorates and 11 were specialist degrees. The university conferred 3,497 bachelor’s degrees, with 119 Doctor of Veterinary Medicine and 140 Doctor of Pharmacy degrees on tap for Monday.

More information about Auburn’s celebrations can be found on the commencement website. 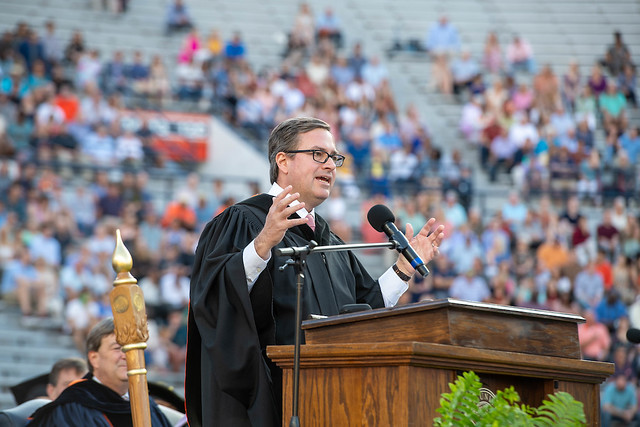 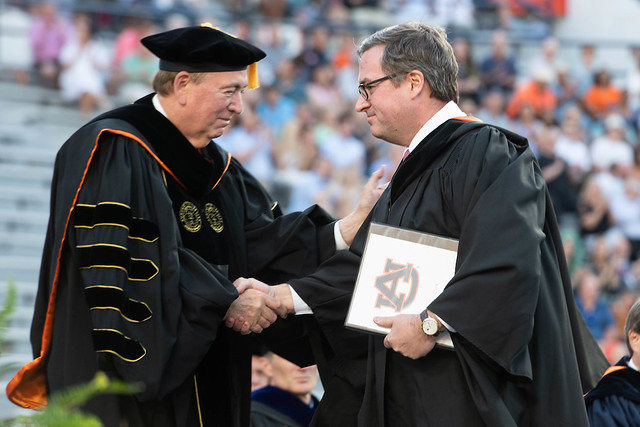 Auburn President Jay Gogue, who is retiring from his post later this month, greeted spring commencement keynote speaker Dave Clark on stage at Jordan-Hare Stadium. Gogue received a standing ovation from graduates and their guests after being recognized for his service by Interim Provost Vini Nathan. 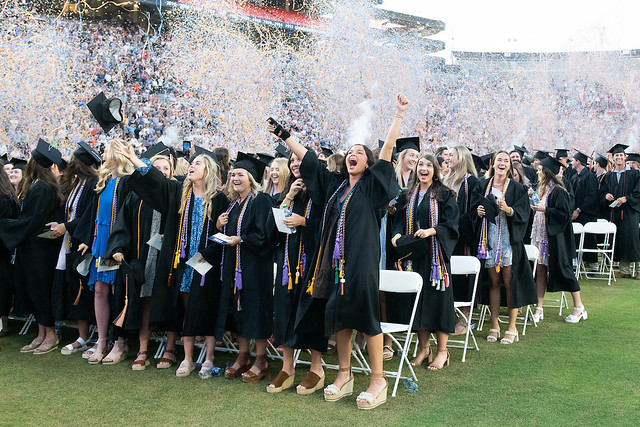 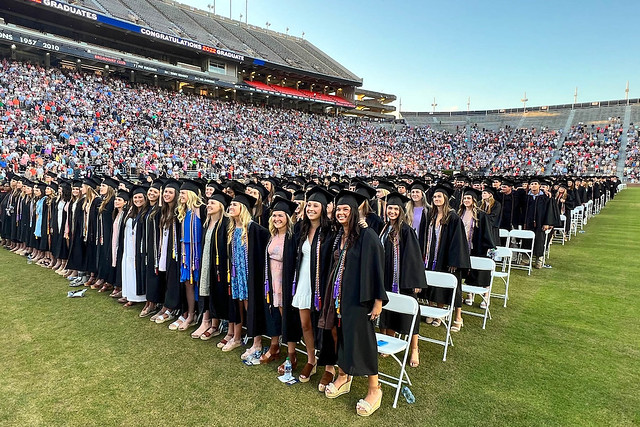 More than 4,600 Auburn graduates and their families attended commencement ceremonies at Jordan-Hare Stadium on Friday, May 6. Graduation festivities continued at Neville Arena on Saturday and will conclude on Monday with the Harrison College of Pharmacy and College of Veterinary Medicine graduates.