Why do some people get certain diseases and others do not? Why do a few individuals live to 100 years old, while the vast majority don’t?

An Auburn University scientist believes his research into “DNA recycling” could form the foundation of eliminating genetic mutations, or errors, in the body’s cells, thus reducing diseases and increasing our longevity.

Professor Vitaly Vodyanoy of the College of Veterinary Medicine has discovered that a rat’s bone marrow nodes contain DNA recycling properties and, according to his previous research, are part of a little-researched primo vascular system running throughout the rat’s body.

In his paper published in the “Journal of Acupuncture and Meridian Studies,” the data suggest cell regeneration may occur by DNA recycling with no mutations.

“We report that rat bone marrow nodes, or hemmules, belong to the primo vascular system,” Vodyanoy said. “These nodes manifest the structural and biochemical properties of the DNA recycling mechanism of cell regeneration that could save and prolong lives.”

Vodyanoy, who invented a patented optical microscopy system marketed commercially around the world, has constructed an even more powerful system for his research into the primo vascular system, up to 3,500 times magnification. The maximum magnification of regular light microscopes is usually 1,500 times.

“We can see details not available with commercial microscopes,” said Vodyanoy, who presented his research as a keynote speaker during the International Symposium on Primo Vascular System, held virtually last summer. “If you look at our research paper’s images, you will see the internal primo node structures of micron and sub-micron sizes. It is amazing to see the detail.

“You cannot see the primo vessels until they are touched because they are transparent, but they turn a yellowish color when touched. The width of the node is only 1 millimeter, and the fine structure of the node can only be seen using high-resolution light microscopy.”

When a bodily injury occurs, cells divide to make new cells to repair the injury. However, Vodyanoy says the division causes errors in the cells that can lead to chronic diseases, including Alzheimer's, cancer, diabetes and many other illnesses.

The key point of Vodyanoy’s research results, he says, is that the primo vascular system and bone marrow nodes should form a foundation for much more research to potentially unlock answers to the human body’s health.

“Bone marrow primo nodes from rats are easy to harvest for studying mechanisms of regulation of cell regeneration, wound healing, organism rejuvenation and longevity,” he said. “We hope our findings will lead medical researchers to study human bone marrow more in depth.”

An example of an acupuncture point, he said, would be one located below the knee that is thought to connect to the stomach. If the theory holds true, stimulating the point sends stem cells to the stomach, where they regenerate and repair the organ.

“Much research is conducted on the blood and lymphatic systems. I believe we are opening the door to further studies into this third vascular system in the body.”

“In the second century AD, Galen described the blood circulatory system,” Vodyanoy said. “Fifteen hundred years later, Thomas Bartholin discovered the lymphatic system. We should not wait hundreds of years for acceptance and more research into the primo vascular system.”

He believes potential medical advances from research into the primo vascular system, as possibly the underlying meridian system of acupuncture, could be comparable to breakthroughs created by the discovery of the lymphatic system.

“Many people consider the acupuncture meridian system as nothing more than a network of lines drawn on a body map and labeled with hieroglyphs,” he said, “but we are using microscopy to see real anatomical structures underpinning these dots and lines.”

However, even if research disproves the theory that the primo vascular system is the basis of acupuncture, he says science still will have the proven existence of the primo vascular system, which could create a new paradigm in biology and medicine; provide a source of stem cells; offer new and efficient methods of organ regeneration; promote longevity; and lead to new diagnostic and therapeutic methods. 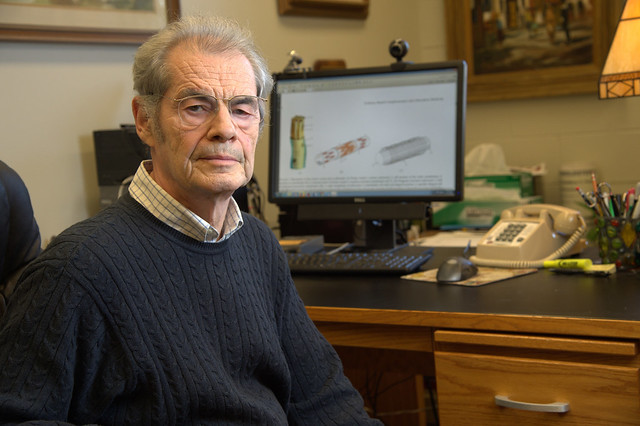 Professor Vitaly Vodyanoy of Auburn University’s College of Veterinary Medicine believes his research into “DNA recycling” could form the foundation of eliminating genetic mutations in the body’s cells, thus reducing diseases and increasing our longevity. He has discovered that a rat’s bone marrow nodes contain DNA recycling properties and are part of a little-researched primo vascular system running throughout the rat’s body.

These images, taken from Vitaly Vodyanoy’s optical microscopy system, show animal skin and a sebaceous gland, which secretes oils to lubricate and protect the skin. The sebaceous glands are often located close to hair follicles containing stem cells. In image A, the animal skin is 1 millimeter across, and the red circle indicates the sebaceous gland. Image B shows a 50-micron cross section of the sebaceous gland that is smaller than the thickness of a 70-micron human hair. The small round balls are oil vesicles only 4.5 microns in diameter; the magnification is 3,500 times with Vodyanoy’s optical microscopy system. The maximum magnification of regular light microscopes is usually 1,500 times. 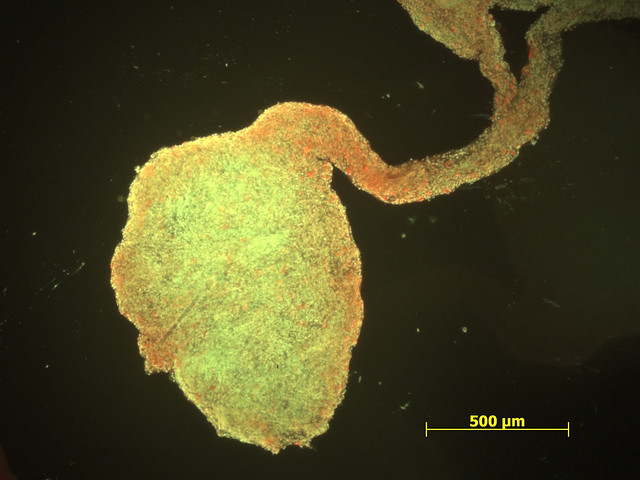 This image shows a primo vascular node and vessel stained with aridine orange. The body of the node is approximately 0.9 millimeters across, while the vessel’s diameter is only 0.14 millimeters. At the top of the node, the vessel branches and connects with other nodes, creating a network of primo nodes.

The College of Veterinary Medicine is the South's original and nation's seventh oldest veterinary medical program, celebrating 126 years. We prepare individuals for careers of excellence in veterinary medicine, including private and public practice, industrial medicine, academics, and research. The college provides programs of instruction, research, outreach, and service that are in the best interests of the citizens of the state of Alabama, the region, the nation, and the world.