Harold A. Franklin, Auburn University’s first African American student, passed away Thursday, Sept. 9, at a Talladega, Alabama, hospital. He was 88.

Franklin integrated Auburn as the university’s first Black student on Jan. 4, 1964, coming to the Plains as a Graduate School enrollee. He went on to a successful 27-year career as an educator in higher education after leaving Auburn in 1965, earning a master’s degree in international studies from the University of Denver and teaching history at Alabama State University, North Carolina A&T State University, Tuskegee Institute and Talladega College before retiring in 1992.

Franklin initially was not allowed to defend his thesis at Auburn, a wrong that was righted last Feb. 19, and he participated in fall 2020 commencement exercises on Dec. 12.

“I’m just about speechless after all these years,” Franklin—who graduated with honors from Alabama State College in 1962—said after walking across the stage at Jordan-Hare Stadium in December. “I realized it wasn’t going to be easy when I came here as the first African American to attend Auburn, but I didn’t think it would take this long. It feels pretty good. I’m glad I could do something to help other people, and my mom and dad always taught us that, when you do something in life, try to do something that will help others as well.”

In 2001, Auburn honored Franklin as its first Black student by awarding him an honorary Doctor of Arts and in 2015 erected a historic marker in Franklin’s honor near the Ralph Brown Draughon Library, where he first registered for classes.

“Dr. Franklin was a pioneer who paved the way for other African American students to attend Auburn University,” Auburn University President Jay Gogue said. “Auburn is a better institution because of Dr. Franklin’s bravery 57 years ago. His spirit of internal fortitude will continue to inspire us.”

Earlier this year, a plaza area was created to accompany the marker adjacent to the library, and it will be unveiled at a special ceremony in November.

“Dr. Franklin was a trailblazer,” Auburn University Trustee Elizabeth Huntley said. “I would not be here today if it was not for his courage to enroll at Auburn and in the process desegregate the university. Dr. Franklin broke the barrier so that generations of African American students, including my husband, daughter and me, could graduate from Auburn University.

“It takes a tremendous amount of courage to do the right thing and create opportunity for others. I will always appreciate Dr. Franklin’s tenacity, perseverance and his Auburn spirit that was never afraid.”

The Auburn Alumni Association’s Black Alumni Council recently named a scholarship in honor of Franklin, whose legacy also was honored by the creation of The Harold A. Franklin Society by Auburn students in 2008.

“I am deeply saddened to learn of the passing of Dr. Harold A. Franklin, and on behalf of the Black Alumni Council, I offer sincere condolences to his family and loved ones during this difficult time,” said Chacolby Burns-Johnson, chair of the Black Alumni Council. “Dr. Franklin was a true trailblazer as the first Black student to enroll at Auburn University in 1964, as he faced many obstacles. Dr. Franklin was a leading example of determination, hard work and perseverance as he paved the way for me and over 10,000 Black alumni of Auburn, and for that, I say thank you and am forever grateful.

“It was a privilege to talk with him and to share the establishment of the Dr. Harold A. Franklin Annual and Endowment Scholarships by the Black Alumni Council to honor him and his sacrifice. During our connection, he was extremely overjoyed and pleased to be recognized in this way and was most happy to learn that future generations of deserving Auburn students would benefit from the scholarships to help them achieve their goals and aspirations. The power of his legacy remains strong, and Dr. Harold A. Franklin will forever be remembered in our hearts and minds as we continue to celebrate this outstanding pioneer as one who truly embodied and cultivated a spirit of inclusion, equity and diversity as a shining example for all of us to follow.”

Born Harold Alonza Franklin on Nov. 2, 1932, in Talladega, Alabama, he was one of 10 children to George Franklin Sr. and Henrietta Eugenia Williams Franklin. His father worked at the Alabama School for the Deaf and Blind, while his mother taught and played piano in church.

During his senior year of high school, the United States was embroiled in the Korean War, and Franklin left school to join the U.S. Air Force. After graduating from Alabama State College in 1962, he thought about attending law school before Fred Gray—the famous civil rights attorney who represented Martin Luther King Jr.—encouraged him to study history at Auburn.

He went on to marry Lilla Mae Sherman, and they had one son, Harold Franklin Jr. She preceded him in death, and after retiring from teaching, Franklin worked as the manager of a funeral home in Sylacauga.

Before returning to campus to defend his master’s thesis inside Thach Hall’s Bond Memorial Library in February 2020, Franklin also met with members of Auburn’s Black Student Union, or BSU, as part of Black History Month celebrations.

He was unable to participate in spring commencement ceremonies after the university was forced to postpone them due to the COVID-19 pandemic, but received his diploma by mail in June. He returned to Auburn in December and participated in a hooding ceremony for Auburn’s first female African American doctoral graduate in the Department of History, Shari L. Williams, during commencement festivities.

“Harold Franklin was a civil rights icon who overcame enormous obstacles to help change the world and push Auburn University toward becoming a better version of ourselves,” said Associate Professor of History Keith Hébert, who helped coordinate Franklin’s thesis defense and commencement participation. “Beyond integrating our university, Harold was an exceptional student who earned high marks as an Alabama State University undergraduate. During his many decades as a professor of Black history and culture at Talladega College, he inspired multiple generations of students who today are major leaders in the fields of education, business and law nationwide.

“Foremost, he was a good and decent person who treated everyone fairly and equally—even those who did not extend him the same level of humanity—and forgave those who had wronged him.”

After walking across the stage at Pat Dye Field in December, Franklin was asked for advice for Auburn students and graduates as they embarked on their future journeys.

“Do your best and be honest,” Franklin said. “Treat everybody with respect, and if they don’t treat you with respect, don’t associate with them. That’s what I’ve tried to do all my life.” 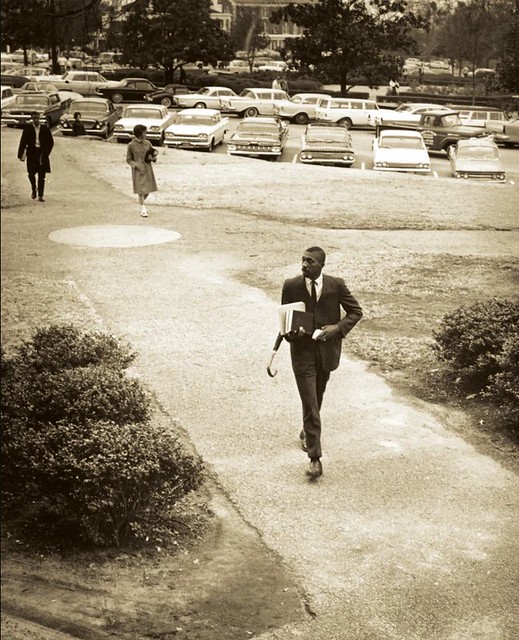 Harold A. Franklin integrated Auburn University as its first African American student in 1964. 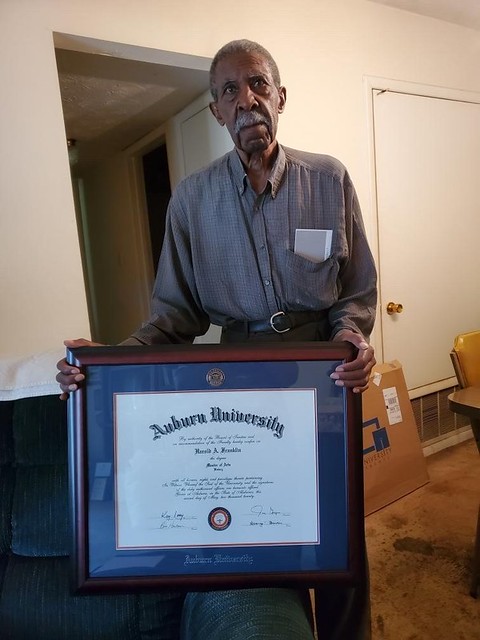 Harold Franklin received his master's diploma in June 2020 after spring commencement was postponed due to COVID-19. He returned to campus in December to participate in fall commencement festivities. (Photo by Chonette Ashley) 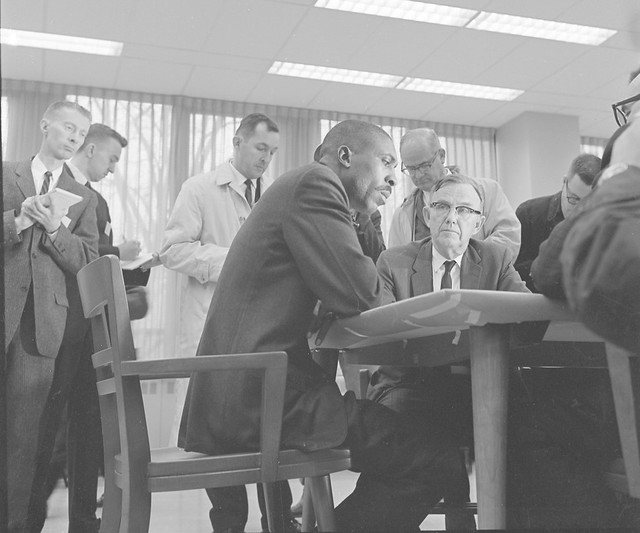 Harold Franklin registered for classes at Auburn University as its first African American student on Jan. 4, 1964. 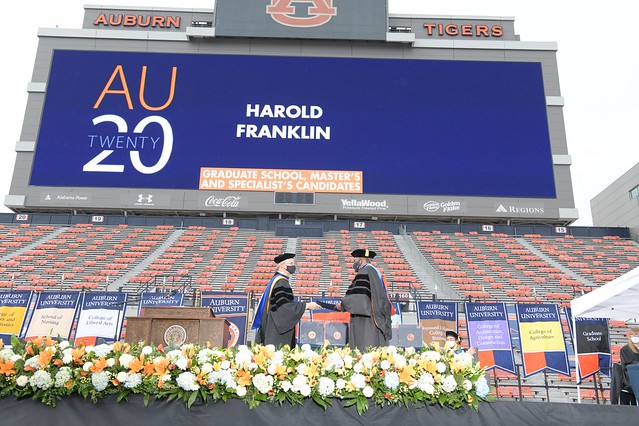 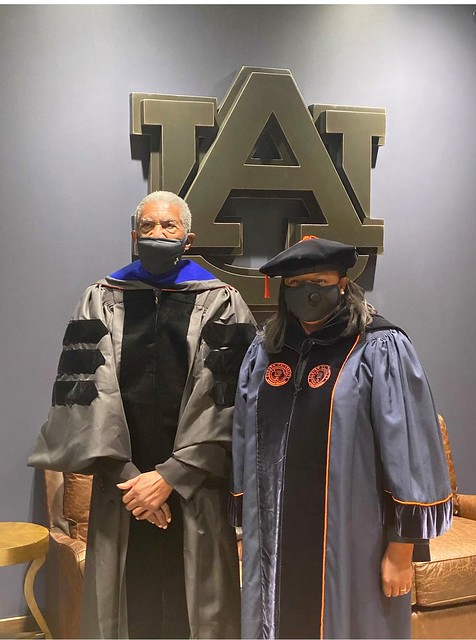 Harold Franklin's integration of Auburn University in 1964 paved the way for African American students like Elizabeth Huntley, now an Auburn Board of Trustees member, to attend the land-grant institution. 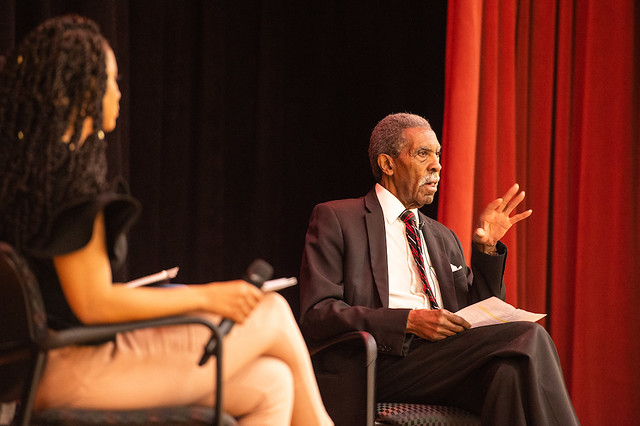 Harold Franklin met with members of Auburn University's Black Student Union during Black History Month in February 2020 prior to defending his thesis that month.