Specialists from the Auburn University College of Veterinary Medicine’s Southeastern Raptor Center and the Georgia Department of Natural Resources were on hand Friday at Pyne Road Park on West Point Lake near LaGrange, Georgia, to release a young bald eagle rehabilitated at the center.

The eagle, which hatched in early spring, was transferred to the raptor center in April after being found on the ground near Keysville, Georgia. For unknown reasons, it did not fare well once it fledged from the nest. Slightly underweight on its arrival at Auburn, the eagle was also diagnosed with internal parasites.

While at the center, the young raptor was housed with an adult bald eagle to help it learn natural behaviors. During its rehabilitation, it was treated for parasites, passed all its flight tests and was medically cleared by veterinary clinician Dr. Seth Oster as ready to return to the wild.

The Southeastern Raptor Center sees a larger influx of young, rescued birds in the spring, particularly nestlings or fledglings, according to Stephanie Kadletz, a raptor rehabilitation specialist at the center. On average, she said, the center admits approximately 50 orphaned or injured nestling or fledgling raptors each year and more than 350 total raptors annually from across Mississippi, Georgia and Alabama.

The center’s mission is to rehabilitate and release injured and orphaned raptors when possible, educate the public about these magnificent birds of prey and research raptor-related issues. Approximately 35% of the raptors brought annually to the center are rehabilitated and released back into their natural habitats.

According to Dr. Bob Sargent, a program manager with Georgia DNR’s Wildlife Resources Division, this eagle release is another important milestone in the gradual recovery of the bald eagle population in Georgia.

“In 2015, surveys recorded more than 200 active bald eagle nest territories in the state, a remarkable improvement from the 1970s when no successful nests were recorded, and a testament to the importance of banning the use of DDT pesticide in the U.S. and protecting the species under the Endangered Species Act,” Sargent said. “However, the bald eagle is still listed as threatened by the state of Georgia because of its rarity and other factors, so there is still work to be done.

“Along with habitat improvements, nest monitoring and legal protections, the availability of veterinary and rehabilitation services for injured eagles is a vital part of eagle conservation efforts. The raptor center at Auburn serves an essential role in this respect and consequently is an especially valuable partner with the DNR.”

The juvenile eagle was released at West Point Lake because the lake supports a population of eagles throughout the year, especially during the hot summer months.

“It will be able to hone its hunting skills by observing other eagles,” Sargent said. “Additionally, West Point Lake is relatively close to Auburn, so this minimized potential travel-related stress.”

Kadletz said the Southeastern Raptor Center team is honored to have this opportunity to work with Georgia DNR to give injured, ill and orphaned raptors a second chance at living a full life back in the wild.

“It’s a privilege to continue to contribute to the wild populations of raptors in Georgia and across the Southeast,” said Kadletz, part of the team that helped ready the bald eagle for release. “It’s especially important with such species as the majestic bald eagle that was once endangered in the U.S.” 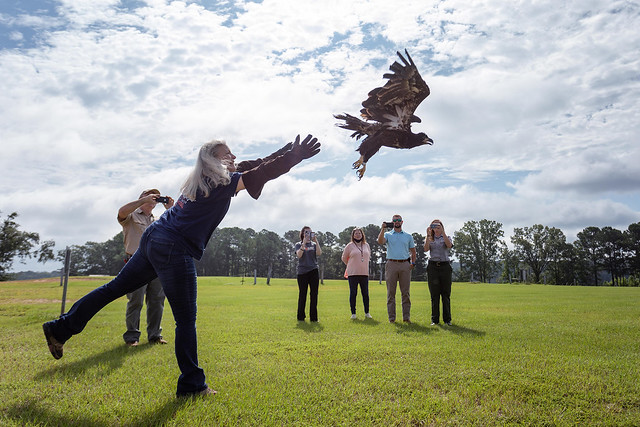 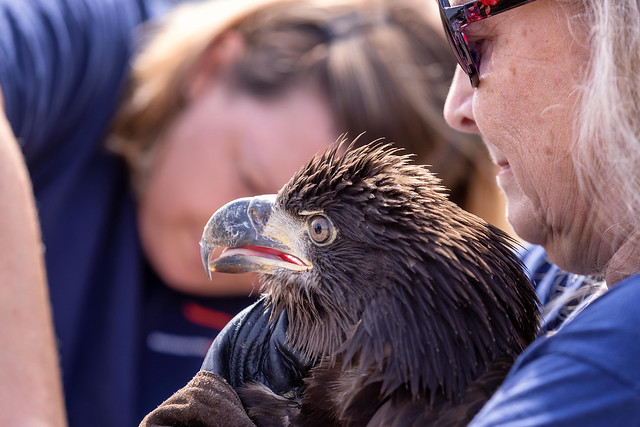 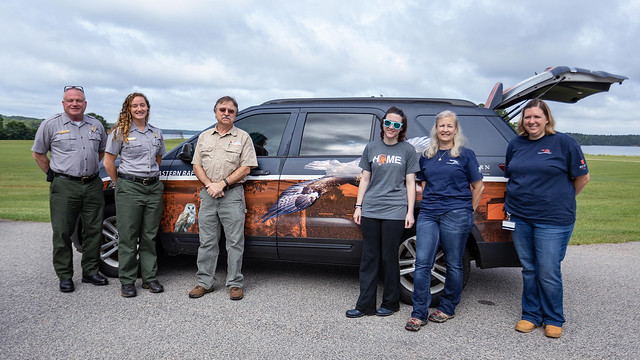 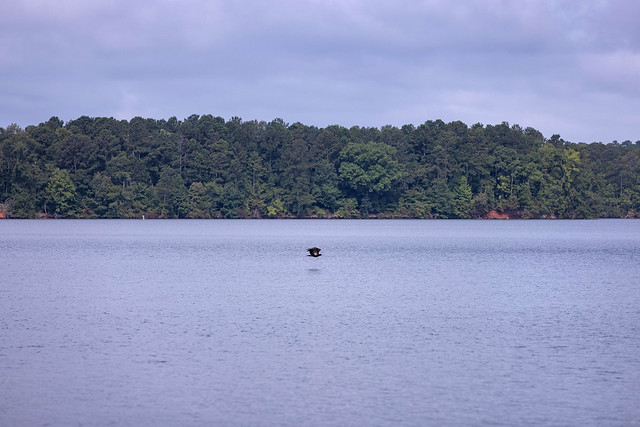 A young bald eagle brought to the Southeastern Raptor Center for treatment in April was successfully released back into its natural habitat on West Point Lake in Georgia on Aug. 20.