Standing in front of Auburn University’s newest group of graduates at Auburn Arena on Friday night, Nelda Lee encouraged those assembled to make their lives into great stories of achievement, happiness and fulfillment.

The 1969 alumna and Carrolton, Alabama, native recounted memories from her storied career as a leader in the aerospace engineering field and encouraged graduates to strive to reach new heights during her impassioned commencement address. Lee, an aerospace and aviation pioneer who was the first civilian woman to fly the F-15 Eagle, beamed with warmth while speaking to her fellow Auburn graduates.

“We are here today to cheer each of you on and encourage you to go to the next level and achieve all of your life’s expectations and destinations,” said Lee, who went on to a 45-year career with Heritage McDonnell Douglas Co., now a part of Boeing. “You all have reached a milestone destination today. Your time has come to go make your mark.”

Lee showed the assembled graduates the printed program she has saved from her own Auburn commencement, 52 years ago, when she was the only female among a group of 16 aerospace engineering graduates taking part in graduation exercises in March of 1969. She recounted memories of attending classes as a 4-year-old with her father, an Auburn mechanical engineering student, and 18 years later receiving her diploma and FAA private pilot’s license.

“My world opened up immensely that day,” said Lee, who graduated high school in a class of less than 50 students.

Lee implored graduates to not be afraid of failure, telling a story about mistakenly landing on the drag strip at Talladega Superspeedway, instead of the neighboring airport’s runway at the end of her first solo flight while still a student in 1968.

“The good thing is I survived that solo flight and had many more successful landings after that,” said Lee, the second woman to earn an aerospace engineering degree from Auburn. “I encourage you, don’t be afraid of mistakes. Land on the drag strip. Endure the faux pas that comes, make the most of it and move on.”

She also referred to life as a three-act play that tells a person’s own tale.

“Our life is our story, and it does have an Act I, beginning, an Act II, middle and an Act III, recharge and a time to give back,” said Lee, who has mentored generations of Auburn students. “So, this speech is part of my story and a challenge to each of you to make your life story the best possible.

“I don’t want you to leave here today thinking a three-act play has only a beginning, a middle and an ending. I believe our academic colleagues here today would support the reason for acts in a play is to make sure that the story evolves, where the stakes get higher and higher and ultimately reach a thought-provoking pinnacle and resolution.”

Lee closed with words of encouragement for the graduates.

“Auburn has equipped you with a strong foundation and the fundamentals of our beloved Auburn Creed,” she said. “You accepted the challenge, you took the risks, you succeeded with some tasks, you failed at others and, for some, you thought about quitting. But you did not quit.

“That means you are ready for Act II. Give it your best and enjoy it. After Act II, take your confidence, courage and commitment into your Act III, and love it.”

Friday night’s address also included the official conferral of more than 1,400 degrees, the group recognition of undergraduate students graduating with academic honors and an official welcome to the Auburn Alumni Association from President Regenia Sanders.

The university awarded its doctoral and master’s degrees following Lee’s speech, and summer commencement ceremonies continued Saturday with undergraduates welcomed to the Auburn Arena stage. Saturday’s graduates also were invited to enter Jordan-Hare Stadium throughout the day to take photos with their names emblazoned on the south endzone’s jumbotron as part of the weekend’s celebration.

Ralph Jordan Jr.—the son of legendary Auburn football coach Ralph “Shug” Jordan—received an honorary Doctor of Science from the College of Sciences and Mathematics on Friday night. The honor was unanimously approved by the Auburn Board of Trustees in its April meeting for Jordan’s “exceptional service leading to improved quality of life and service to humanity.”

Jordan—who earned a bachelor’s degree in biomedical science from Auburn in 1970 and a master’s degree in zoology from the university in 1975—worked as a non-game and endangered species biologist with the Tennessee Valley Authority, or TVA, and was responsible for the natural resources management of its public lands and ensured the continued compliance with federal legislation, including the Endangered Species, Clean Water and Environmental Policy Acts. He was honored with the TVA’s Bronze Honor Award.

He gave a lifetime of service to Auburn through his leadership in the Auburn Alumni Association from 2006-08, the Office of Development, the Athletics Advisory Board and the College of Sciences and Mathematics Leadership Council, where he was presented with the Distinguished Alumni Award in 2014. In 2013, alongside other members of the College of Sciences and Mathematics, helped establish the Biodiversity Learning Center, a resource that houses Auburn’s Museum of Natural History and continues to promote biodiversity, conservation and the preservation of Alabama’s natural resources.

“Auburn is in my blood, and this is the highest honor I could possibly receive,” Jordan said. “I’m just very appreciative and humbled. I look at the list of previous honorees, and they are outstanding people, a lot of whom I knew. I just try to come close to measuring up to them and what they accomplished in their lives.”

Among other graduation highlights was Matt Beth, who celebrated the completion of a Master of Science in exercise science on Friday night. Beth survived a life-threatening traumatic brain injury he suffered in 2016 after falling from a three-story building. Beth earned his bachelor’s in exercise science from Auburn in 2020 and then completed his master’s in just one year.

A mainstay on the Dean’s List, Beth is confined to a wheelchair and is unable to walk, talk or move his left arm or left leg. Beth, who communicates via computer by typing with a stylus one letter at a time, plans to continue his Auburn studies and earn a doctorate.

All totaled, 1,406 graduates participated in the commencement celebrations, including 344 master’s degrees, 144 doctorates and 13 specialist degrees. The remaining 905 were bachelor’s degrees.

Due to COVID-19, safety protocols were in place for all ceremonies, including the requirement of face coverings inside Auburn Arena, with individual colleges and schools recognizing graduates at set ceremony times in the stadium. 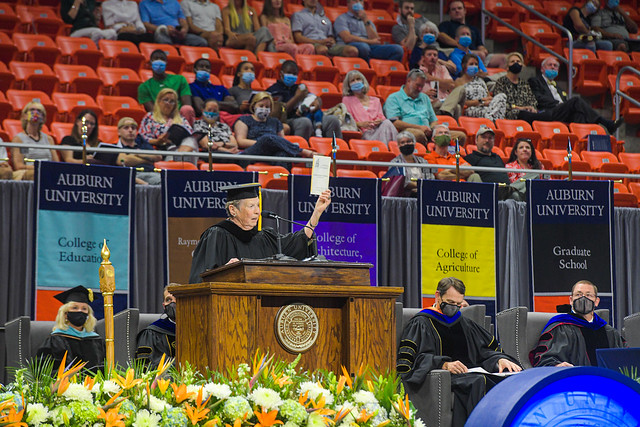 Auburn alumna Nelda Lee, a pioneer in the aerospace engineering field, held up the program from her own 1969 Auburn graduation during her commencement address at Auburn Arena on Friday night. 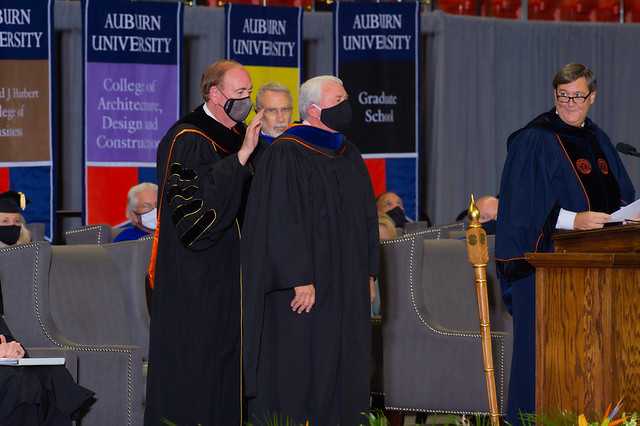 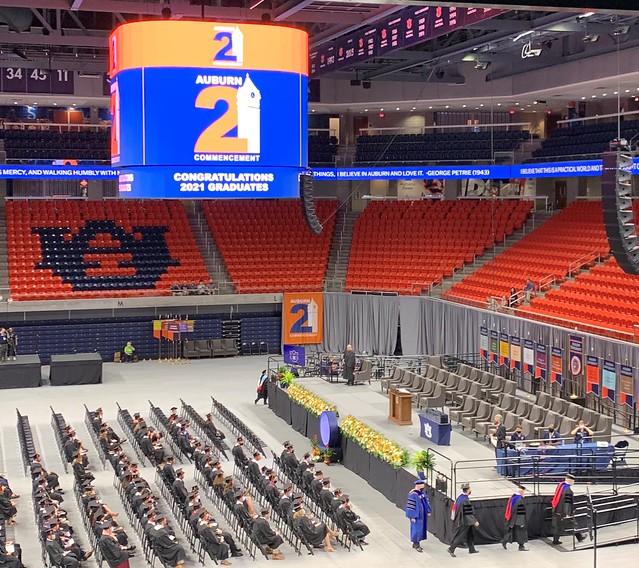 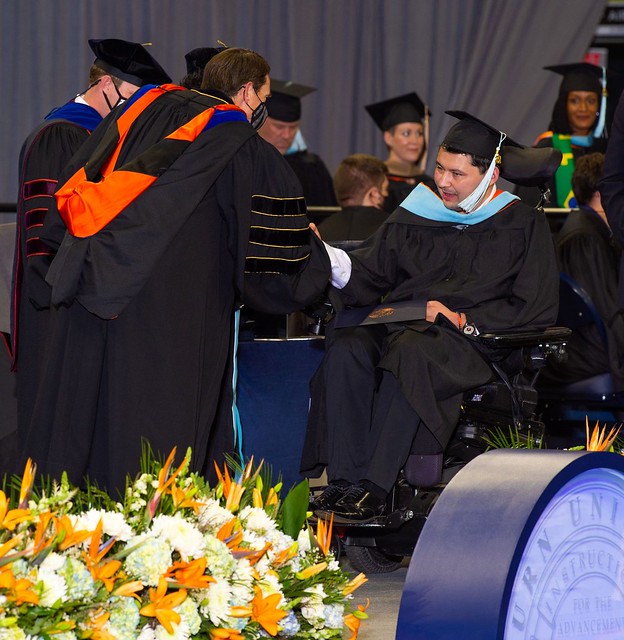 Matt Beth, who suffered a traumatic brain injury in 2016, celebrated the completion of his master's in exercise science with Board of Trustees member Clark Sahlie during Auburn University's summer commencement exercises on Friday, Aug. 6. Beth, who earned a bachelor's degree in the same discipline in 2020, completed his master's in just one year and is going on to work on his doctorate.