Auburn University honored one of its most esteemed alumni at a dedication ceremony for the Bessie Mae Holloway Hall in the Village area of campus on Friday afternoon.

Holloway—the school’s first African American Board of Trustees member—represented the 1st Congressional District in that capacity from 1985-2000 and was a lifelong resident of Prichard, Alabama, before her passing on Sept. 11, 2019. The residence hall was previously known as Tiger Hall, and the name change was inspired by Holloway’s commitment to student issues and reputation as “a students’ trustee.”

“It is with great excitement and joy that I speak to you all today as part of yet another milestone in the forward progress of Auburn University, honoring a beloved former Board of Trustees member and acknowledging such a pioneering woman who was so devoted to the success of all Auburn students,” said Board of Trustees member Elizabeth Huntley, who serves as co-chair of the Board of Trustees Task Force. “Having a student residence hall named in honor of Dr. Holloway serves to remind all Auburn students—past, current and future—that, with perseverance through adversity and ‘work, hard work,’ anything is possible. This naming also speaks volumes to our students about where we have come as an institution and where we are headed.

“For me, this day also holds a personal meaning. As the second Black woman to serve as an Auburn Trustee, I have always been proud to continue Dr. Holloway’s legacy. It was the strides she made and the barriers she broke through that helped set the groundwork for my journey and that of so many others. During my time as a student, I recall personally meeting Dr. Holloway, and I vividly remember how personable she was with the student body during her term on the board.”

Members of Holloway’s family—including her nephew, Norman Vivians—were on-hand for the occasion, which also was attended by representatives of the NAACP, as well as several Auburn Board of Trustees members, student leaders, administrators, faculty and staff.

“This is a very special day for us,” Auburn President Jay Gogue said. “The stories you hear about the students and her and her devotion to the [students] is really what makes her so very special to us at Auburn. She had a great life and a great legacy that she has left and, as a part of our efforts, we want to make sure we really honor people that have meant so much to Auburn. We are excited that the Board of Trustees approved unanimously the naming of this campus facility as Holloway Hall.”

Councilwoman Stephani Johnson-Norwood from the City of Prichard represented Holloway’s hometown and presented an official proclamation in honor of the city’s revered former resident that will be displayed in the building for students to see as they come and go from the hall.

“I can’t tell you how proud our little city of Prichard is of this honor,” Johnson-Norwood said. “I pray this proclamation will be a beacon of light for all students—especially since they are first-year students—just as she continues to be a beacon of light to us in Prichard. She was well-known in her community, she served her community, she would help anybody, and I heard people say she was the closest thing to Mother Teresa you would ever meet.”

Holloway led a life dedicated to education, earning her bachelor’s degree from Alabama State University, her master’s from Xavier University of Louisiana and her doctorate in education from Auburn. She worked more than 25 years as a teacher and an instructional specialist with the Mobile County Public School System.

She was devoted to Auburn students during her tenure on the Board, devoted to inclusion and diversity and served as a role model and mentor to many students as a trailblazer leading meaningful change at Auburn. In 2000, Holloway received the Auburn University Black Caucus Board of Trustees Award for being instrumental in supporting the causes of the caucus.

“The residence hall behind us has been home to thousands of first-year students,” said Bobby Woodard, senior vice president for Student Affairs, who opened the ceremony’s remarks. “For many students, it was their first home on the Plains. It is where they made lifelong friendships and experienced many firsts as Auburn students and on-campus residents. It is where their love for this university grew as they became part of the Auburn family.

“These students have come to Auburn from all over, made significant impacts on campus and have gone on to be leaders in their careers and communities. Today, we officially name this building Holloway Hall, and I can’t think of a more fitting namesake.”

The Auburn Board of Trustees voted on the naming initiative at its Feb. 5 meeting, and Friday’s Holloway Hall ceremony was the first of two scheduled for this month. Eagle Hall will be renamed in honor of Josetta Brittain Matthews, Auburn’s first Black graduate, in a similar celebration on April 21.

“It is with great pride that we all witness this historic moment to honor the legacy of Bessie Mae Holloway, who brought forth lasting advancements while serving as the Auburn Board of Trustees’ first Black member and only its second woman member,” said Auburn Trustee James Pratt, co-chair of the Board of Trustees Task Force. “As a member of the Board of Trustees, I am pleased to see this continued movement toward progress, acknowledging those whose footprints in time set the course forward for our great institution and the needed embrace of a culture of inclusivity that will serve to further unite our strong Auburn Family. With this naming, we reaffirm our devotion to the ideals of the Auburn Creed as we continue the long-term, deliberative work toward advancing and promoting opportunity and equity.

“This day speaks to the value we place on diverse perspectives and experiences and an environment in which we all can excel and thrive. And it is so exciting to see Dr. Holloway receive this well-deserved recognition of her years of service and all she did to benefit Auburn for years to come.”

The Trustee Task Force recommended last year that the Student Center be renamed in honor of Harold D. Melton, Auburn’s first Black Student Government president and chief justice of the Georgia Supreme Court. The official name change in November made the Melton Student Center the first building at Auburn named for an African American.

Auburn’s latest efforts to evaluate the history and context of its named buildings and structures is part of a larger initiative by Auburn to promote opportunity and equity. The university is committed to advancing inclusion and diversity as core values and is focused on several initiatives in that endeavor, to include addressing disparities in recruitment and retention of students, faculty and staff from underrepresented areas, as well as the implementation of a campus-wide Diversity, Equity and Inclusion Education and Training program. 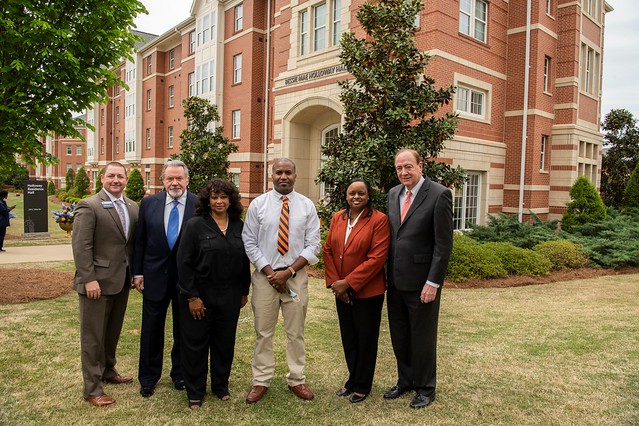 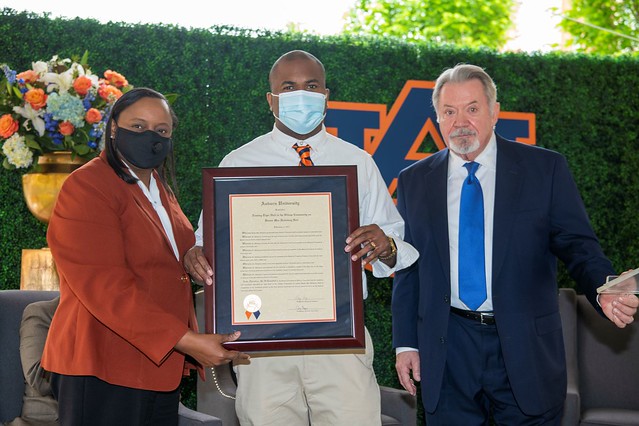 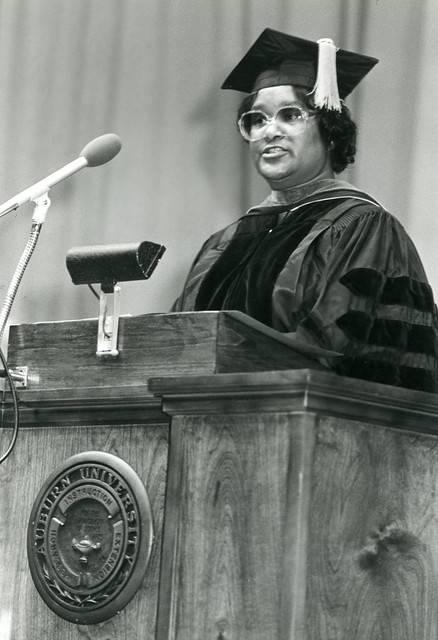 The late Bessie Mae Holloway earned her doctorate in education from Auburn University and became the school's first Black Board of Trustees member in 1985. She passed away on Sept. 11, 2019.