Two Auburn University research projects have been awarded a share of $100,000 from the LAUNCH Fund for Research and Innovation, a university program designed to bridge the gap between innovative research and the marketplace. The winners were selected from among five faculty teams that competed in a recent multistage competition.

A team of veterinary and public health researchers received $70,000 to study the reliability of a breath test it developed for the noninvasive diagnosis of heartworm disease in dogs.

“Our team greatly appreciates the support from the LAUNCH funding program, which will help us to robustly evaluate this novel technology in dogs for the diagnosis of heartworms,” said Assistant Professor Lindsay Starkey of the College of Veterinary Medicine’s Department of Pathobiology. “We also hope to look at the potential for this diagnostic to be used for other diseases in other species in the future.”

Fellow team members include Professor Byron Blagburn, also of the Department of Pathobiology; Associate Professor Sarah Zhody, a vector-borne disease expert from the School of Forestry and Wildlife Sciences who recently transitioned from Auburn to the Centers for Disease Control and Prevention in Atlanta; and Melissa Boersma, an analytical chemist and director of Auburn’s Mass Spectrometry Lab in the College of Sciences and Mathematics.

The test uses a chemical fingerprint found in a dog’s breath to determine if the dog is infected with heartworms. The researchers say initial results are encouraging and that LAUNCH funding will allow the team to fully establish the reliability of the test in dogs of different breeds, diets and backgrounds.

A final version of the technology could be similar to a breathalyzer for dogs, avoiding the need for drawing blood and possibly detecting the presence of heartworm earlier than current blood-based tests. This noninvasive approach to testing dogs could change the $1 billion heartworm testing market by expanding testing, as well as improving both safety and convenience for pets and veterinarians, according to the researchers.

Professor Kathy Lawrence and Research Associate John McInroy of the College of Agriculture’s Department of Entomology and Plant Pathology were awarded $30,000 to identify bacterial strains that could assist in expanding available farmland to include soils currently too salty and to increase drought tolerance of crops and grasses during changing climate.

Their project will expand Auburn’s probiotic libraries, isolate and study bacteria present in extreme conditions and identify microbes that will aid plant growth. It builds upon the successful commercialization of other libraries of bacterial strains assembled by Joseph Kloepper, professor emeritus of plant pathology, and Lawrence.

Fund recipients have access to expert resources in Auburn Research Park’s New Venture Accelerator for startup advice and to the professional staff of the Office of Innovation Advancement and Commercialization for help in devising pathways to commercialization.

“The LAUNCH program is designed to be a catalyst to push forward promising technologies to the commercialization stage and provide critical solutions to global problems,” said Cary Chandler, director of the LAUNCH program and senior director of the Auburn Research and Technology Foundation. “The awardees this year are great examples of that in action.

“It is essential to our land-grant mission that we make investments in research and take it to market to provide real-world solutions and create jobs. Our goal is to find a way to increase the funding and frequency for this program to increase its success.”

More information about how Auburn supports experts through LAUNCH is available on the LAUNCH website. 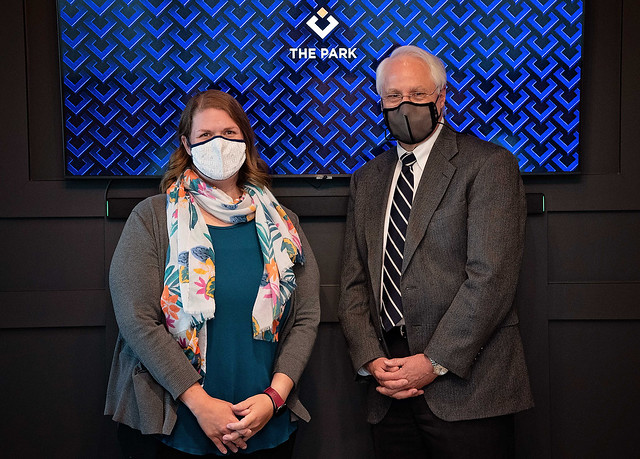 Auburn Assistant Professor Lindsay Starkey, left, is part of a research team that received $70,000 from the LAUNCH Fund for Research and Innovation. Starkey is studying the reliability of a breath test for the noninvasive diagnosis of heartworm disease in dogs. Pictured with Starkey is Vice President for Research and Economic Development James Weyhenmeyer. 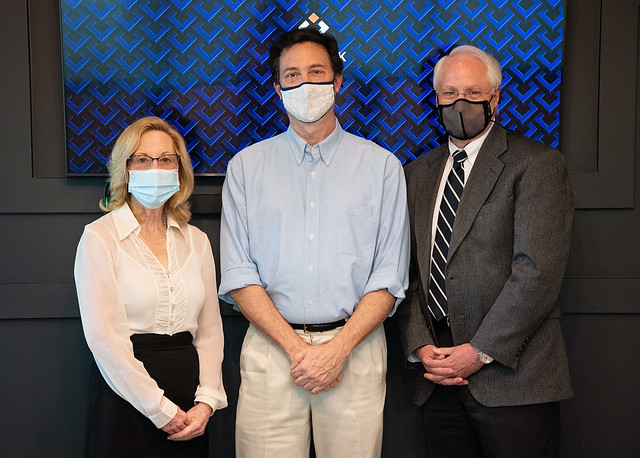 Auburn Professor Kathy Lawrence, left, and Research Associate John McInroy, center, were awarded $30,000 from the LAUNCH Fund for Research and Innovation. They are seeking to identify bacterial strains that could assist in expanding available farmland to include soils currently too salty and to increase drought tolerance of crops and grasses during changing climate. They are pictured with Vice President for Research and Economic Development James Weyhenmeyer.