Student Counseling and Psychological Services therapy dogs Moose and Nessie are adding a new four-legged friend to their crew. Rooster, a 6-year-old black Labrador retriever, is in training to become one of the next therapy dogs on campus.

Before joining Student Counseling and Psychological Services, Rooster was part of Auburn’s Canine Performance Sciences program, or CPS, within the College of Veterinary Medicine.

According to Student Counseling and Psychological Services psychologist and Rooster’s caretaker Sarah Schwartz, during his time with CPS, Rooster participated in several detection projects where he learned to detect different chemical and biological threats.

Rooster was also part of a program that teaches inmates how to train dogs. After completing a canine care curriculum, the inmates’ experience is credited toward an associate degree.

Most recently, Rooster was trained to undergo functional magnetic resonance imaging, or fMRI, scanning. Schwartz noted that it is extremely hard to get dogs to do.

The fMRI project examined the bond between dogs and humans. Each dog spent several weeks paired with a human, and then the humans and dogs were scanned while being shown pictures and videos of their partner.

“He would actually fall asleep in the scanner,” Schwartz said. “He was one of the best ones.”

Now, Rooster is turning his focus to the new task at hand with Student Counseling and Psychological Services.

His training to become a therapy dog will be with Canine Good Citizen through the American Kennel Club and Therapy Dog International. Through these programs, Rooster will enhance his obedience skills, “tricks” and it will help him be alert to the needs of those around him.

Once Rooster is trained, he will stay busy throughout the day just like full-time staff members.

“Rooster will be involved in individual and group therapy sessions and providing direct and indirect therapeutic interventions, such as mindfully petting him or creating a narrative about past experience and including him in the story,” Schwartz said. “He will also be involved in outreach opportunities across campus.”

The outreach opportunities include tabling events that take place on the concourse or with campus departments, classroom presentations and Get Mov’in, a weekly outdoor walking program hosted by Student Counseling and Psychological Services. Rooster will also begin helping Schwartz train students and staff in Animal Assisted Therapy.

During his down time outside of the office, Rooster stays preoccupied with his toys, especially his treat ball.

“He also enjoys a good snuggle and belly rub,” Schwartz said. “He’s a true believer that there is nothing a belly rub can’t fix. Lately, he has been liking his afternoon walks on campus saying hi to the students.”

If you see Rooster out and about, he will likely be carrying his red and black bone to show off. Schwartz encourages individuals to stop to greet Rooster—and don’t be surprised if he approaches you first.

Schwartz says Rooster’s favorite thing to do on walks is to look for someone with empty hands.

“He runs right over and asks for pets since clearly their hands aren’t occupied,” Schwartz said.

Students and campus departments are welcome to schedule an appointment with Rooster. More information can be found on Student Counseling and Psychological Services website. 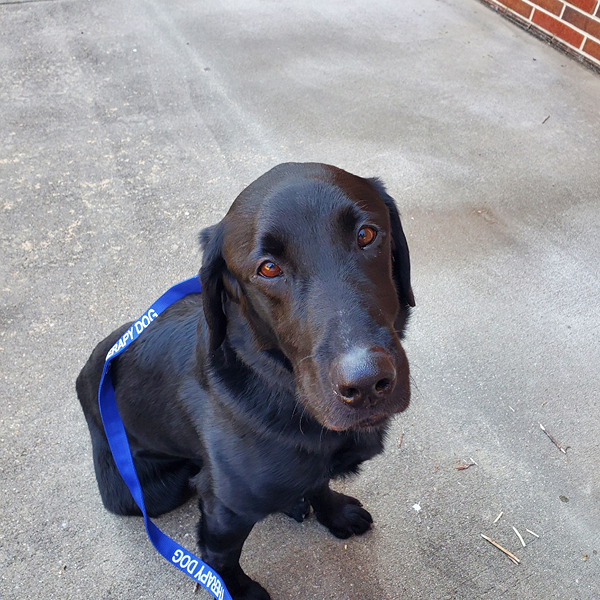